Collie Smith smashed the first triple-hundred in the history of Lancashire League. He passed away, at 26, three months later.

They called Collie Smith a genius, and rightly so. Few matched Smith when it came to sheer brilliance — some even compared him to Garry Sobers, a contemporary. On June 4, 1959, Smith smashed the first triple-hundred for Burnley against Lowerhouse at Liverpool Road — the first triple-century in the history of Lancashire League. Abhishek Mukherjee looks back at the day when the Jamaican prodigy shone for one last time before a car accident nipped the talent in the bud at a mere 26.

Nobody called him O’Neill Gordon Smith. It was always Collie. One of a kind, they called him. They compared him with Garry Sobers, perhaps the greatest cricketer to have emerged from those glorious sandy beaches of the Caribbean.

Smith batted with gay abandon with a flourish matched by few. For someone with a small frame, he hit the ball with tremendous power. He also started out as a fast bowler like most of his countrymen, but switched to off-spin when he saw Jim Laker bowl, and did good enough to earn the nickname ‘Jim’.

He scored hundreds in his maiden Tests against both England and Australia. In fact, he was the first man to do so. This was 1957, when Peter May and Colin Cowdrey unravelled the Sonny Ramadhin mystery thereby warding off ghosts of the past. He was named a Wisden Cricketer of the Year despite West Indies’ poor show.

It did not matter whether he was in Jamaica or in Burnley; and he became a very close friend of Sobers, the man with whom they compared him.

He captured the imagination of the Indians even as Roy Gilchrist and Wes Hall tormented the hosts. At Bombay he scored 63 and 58. At Delhi he scored a hundred and took 8 wickets. That summer he returned to Burnley to play Lancashire League.

Smith was in good form that season. He got 105* against Accrington, and took 5 for 39 against Bacup. In the return match against Accrington he took 4 for 32. Two matches later, against Rawtenstall, his numbers read 34 and 7 for 29.

There was an additional quirk: Team One (Burnley, in this case) were allowed to bat all of Day One, while Team Two Lowerhouse would bat the following day (they were permitted to bat on Day One if Team One had been bowled out).

However, after the two teams had batted out the first two days and there was still no result, the teams resumed their innings from where they had left off to finish the match.

West End Ground, Liverpool Road in Burnley was a small one. In fact, it was so small that there were no sixes. In other words, you got four if the ball crossed the boundary line; it did not matter whether it bounced or not.

Burnley batted first, and got a good start from Robert Entwistle and Peter Stansfield. The score read a decent 67 for 2 when Smith walked out to join Don Ormerod. Smith went past Ormerod towards end of play, and the score read 130 for 2 at stumps on Day One (one must remember the matches were played only in evenings), with Ormerod on 32 and Smith on 37.

As per rules, Lowerhouse batted the morning after, and ran into trouble against Burnley off-spinner Jack Schofield, who took four wickets. Smith himself caught B Smith off his own bowling, and despite a polished 60 (with 11 fours) from Maxie Mahmood, Lowerhouse lost 6 wickets by stumps.

In an uncanny coincidence, they scored 130, the same as Burnley had got on Day One.

Ormerod fell early next morning, and Smith cut loose almost immediately afterwards. He added a quick 50 with AP Miller, who contributed a mere 10. Another 59 were added with captain Fred Kippax (20). Then, finally, he found company in John Clare.

News of the onslaught on that long summer day spread soon, and people flocked to the ground to see their professional in his pomp. Smith romped to a chanceless hundred in no time.

Clare hung around while Smith went about his business. He raced to 150, and aimed for Wally Langton’s Burnley record of 172. Even that was overhauled. He kept on lofting the ball, sending it to an adjacent par, but alas, got only four for every stroke. He made “casual park-users take refuge,” wrote Andrew Ward.

Shortly afterwards he became the fourth man to score a double hundred in a Lancashire League match, Worsley Cup or otherwise. Syd Hird’s 205 went next, followed by Albert Rhodes’ 220.

A general hush of excitement descended on the ground. Everton Weekes of Bacup had slammed 225 not out for Bacup against Rawtenstall less than a year back. Could Smith go past the great man?

He did. By the time stumps were drawn, Smith had reached 230. Along with him was Clare, on 55. He had taken his time, having hit only five boundaries, but had helped Smith put on 163. The score read 414 for 5. After two days that saw 130 being scored, the third day’s play had yielded 284.

The 284-run lead (Lowerhouse, after all, had only 4 wickets in hand) was probably sufficient, but not safe, for cricket has seen bigger upsets: Kippax decided to bat on, which meant Smith had scope to build on his record.

He lost Clare on the same score. Wickets kept falling, but Smith kept batting, unperturbed. The score read 458 when the ninth wicket fell, but wicketkeeper John Richardson hung on gamely, as Smith carried on with business.

Ward wrote “the innings forced the scorers to tick appendices into their scorebooks.” By the time Smith reached his triple-hundred the Lowerhouse fielders were exhausted. Kippax declared on 523 for 9.

Smith’s 306 not out included 54 fours. In other words, boundaries fetched him 216, almost the previous Lancashire League record. As mentioned above, several of these could have been sixes, for though the ground was small, the shots cleared the boundary substantially. He was dropped five times, but that was after he had reached his hundred and had started taking risks.

Up against a humongous 394 with 4 wickets in hand, Lowerhouse sank without a trace, adding a mere 17, Ross Haworth and Colin Martindale sharing the remaining wickets. Bob Bartels, their Ceylonese professional, was the only one to put up some resistance with 42.

– As late as in end-August, Smith played for a combined Lancashire League team against Lancashire, scoring 71 and 114, and taking 4 for 40 in the second innings.

– Lancashire League (outside Wormsley Cup) did not have a double-hundred till the 21st century. Weekes, with 195 not out for Bacup against Enfield in 1949, held the record for 53 years. When Michael Clarke eventually scored 200 not out for Ramsbottom, poor Enfield were on receiving end yet again. Clarke’s score remains the record till 2015.

– Till 2015, Smith, Weekes, Rhodes, and Hird have scored the only four double-hundreds in Lancashire League, Worsley Cup. Curiously, the fifth name on the list belongs to Jonathan Luke Clare, who scored 199 for Burnley against Ramsbottom in 2015. In case the name rings a bell, Jonathan’s grandfather scored 55 when Smith made 306*, as mentioned above.

Smith, Sobers, and Tom Dewdney were returning from Manchester to South London. At 4.45 AM, Sobers’ Ford Perfect was hit by a 10-ton cattle truck, near the Darlaston Bend.

Dewdney, who was at the passenger’s seat, and Sobers, who was driving the car, had injuries of various magnitudes, but lived to tell the tale; Smith, who was fast asleep on the back-seat, had suffered a damaged spinal cord.

Three days later, O’Neill Gordon ‘Collie’ Smith, the man who could have been another Garry Sobers, passed away. 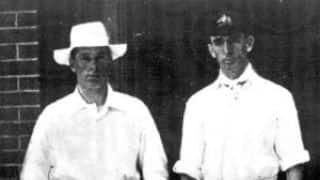 Ashes 1907-08: Clem Hill turns Test on its head after being confined to bed for days