Collins Obuya, born on July 27, 1981, has been Kenya’s torchbearer during a tumultuous decade post the 2003 World Cup. That tournament saw him burst on to the scene with his leg-spin, but as the years progressed he developed into a batsman. Nishad Pai Vaidya profiles the Kenyan captain. 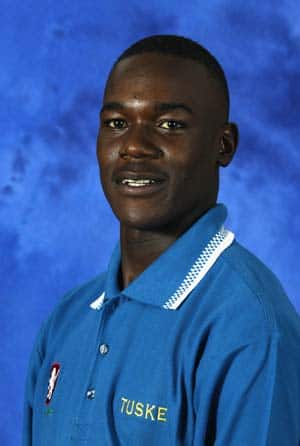 Collins Obuya, born on July 27, 1981, has been Kenya’s torchbearer during a tumultuous decade post the 2003 World Cup. That tournament saw him burst on to the scene with his leg-spin, but as the years progressed he developed into a batsman. Nishad Pai Vaidya profiles the Kenyan captain.

On a sunny February day in Nairobi, Kenya took on the heavyweights Sri Lanka in a 2003 World Cup encounter with the world putting its money on the team from the island nation. Once they posted 210 on the board, everyone expected Sanath Jayasuriya and company to maul the Kenyan attack and romp home easily. However, little did anyone know that a young leg-spinner was to make a mark and script one of the most remarkable upsets in World Cup history. Collins Obuya’s leg-spin baffled and bamboozled a line-up that plays tweakers well. On his way to a fifer [five for 24], he dismissed players of the caliber of Hashan Tillakaratne, Mahela Jayawardene, Kumar Sangakkara and Aravinda de Silva. They crumbled under his spell and handed the Kenyans a stunning victory — one that sparked a run that saw them head into the semi-final of the mega event.

Nore than 10 years on, Kenyan cricket is struggling and it hasn’t built on the encouraging performance in South Africa in 2003. Through that phase, Obuya has remained their dependable man and is someone who has taken the baton from Steve Tikolo — who is undoubtedly the legend of Kenya cricket. It hasn’t been an easy career for Obuya, but he has waded through the difficulties and continues to serve his country.

Born in Nairobi on July 27, 1981, Obuya grew up with brothers Kennedy [Otieno] and David. While Kennedy surged ahead and became a part of the Kenyan side for the 1996 World Cup and established himself as a key member, the younger David and Collins fought their way through the age groups.

Collis Obuya was picked for the Under-19 World Cup 1998 and 2000 for Kenya. However, he couldn’t make much of an impact with both bat and ball. However, he was there in the Kenyan setup in the years that followed and turned up for their numerous representative sides. In 2001, he finally made his One-Day International (ODI) debut alongside his brother David. In a game dominated by Chris Gayle, Obuya did manage to make an impression scoring 27 lower down the order.

Leading up to the 2003 World Cup, Obuya had firmly established his spot in the Kenyan eleven. However, he was to become a star on February 24, 2003 when he snared five Sri Lankans. As the tournament progressed, he continued to deliver the goods for Kenya. He bowled another crucial spell of three for 32 during the Super Sixes encounter against Zimbabwe. These performances only raised his reputation and he was touted for higher honours. In fact, Kenya was pushing for Test status given the promise they had shown at the big event.

However, a 21-year-old Obuya was considering other plans. Cricket wasn’t a lucrative option in Kenya and he wished to become a doctor. Obuya used to sell Tomatoes as his he only earned $1,000 per annum through cricket. As he mulled a move away from the sport after the World Cup, he told BBC, “I am not earning very much from cricket and have been thinking about getting another job. I am awaiting my ‘O’ level results at the moment. Maybe another job could pay for another college. I could do something better. Earn more money. My dream is to become a doctor. How can you compete when you are earning such a small amount?”

The performance at the 2003 World Cup did win him a contract with Warwickshire for the 2003 season. He only played a handful of games without much success before picking up an injury. The following year, he missed the ICC Champions Trophy 2004 in England because of an appendicitis problem. As Kenyan cricket was failing post the 2003 World Cup, Obuya’s cricketing career was also at crossroads. Late in 2004, the Kenyan players were involved in a tiff with the board over contracts and payment and Obuya was one of the figures in that. However, he returned to play for them next year.

Kenya continued to play with the smaller teams even as their encounters with the bigger teams were reduced to a bare minimum. They were also relegated to the status of an Associate member. Meanwhile, Obuya’s bowling prowess took a serious hit, while he kept chipping in with the bat. As a result, the Kenyan board sent him to Australia in November 2005 to work with Terry Jenner, the reputed spin bowling coach under whose tutelage Shane Warne blossomed. The move did not bear results and Obuya has now been reduced to an occasional bowler.

In the years that followed, Kenyan cricket plummeted to inexplicable depths. They only managed to beat the Netherlands at the 2007 World Cup and then failed miserably at the 2007 ICC World T20. The likes of Obuya and Steve Tikolo could do nothing to stop their national side’s predicament.

In recent times, Kenya’s appearances on the big stage have been few and far in between. The last time they were at the highest level was during the 2011 World Cup. During that tournament, Obuya was by far Kenya’s best batsman. In six matches, he amassed 243 runs at an average of 48.60 with two fifties. His most notable performance was an innings of 98 not out which took on the might of an Australian attack that contained Brett Lee, Shaun Tait and Mitchell Johnson.

Obuya’s contributions were in vain as Kenya failed to win single a game at the World Cup. He was named captain after that campaign succeeding Jimmy Kamande as Kenya continues to fight it out at a lower level.

Looking back at the 2003 World Cup, one always wonders what might have been for Kenyan cricket and Obuya. As is the case, his personal fate coincided with that of his team’s.

IPL 2013 spot-fixing: Dawood Ibrahim could be named in charge sheet