Perhaps it is time for Australian cricket system to end their infatuation with the modern methods, and for being over-cautious.

These are troubled times for Australia, and understandably so. The warriors of the past who did everything it took to keep the Australian noses ahead are carked, because, they had never either been whitewashed in Sri Lanka or in South Africa, in two different formats within a span of a few months. The snobbish Australians may go on claiming that T20 cricket is the least they care about, the envious world also knows that the Australians will at least not stoop to the levels of being whitewashed at home in any format.

Whether Australia admit it or not, their troubles are far from over. The Test side has the ability to win on the bouncy and pace-friendly wickets, but the moment the ball starts turning or seaming or swinging, most of their players begin struggling. The T20 side is far from settled, since Australia keep making far too many unwanted and unnecessary changes to achieve something for which they do not really work hard for. Of late, Australian cricket has kept taking the beating across the world, and time ahead is going to be far more challenging with a determined and cocky South Africa will be followed by the ever-unpredictable Pakistan in touring Down Under.

When a team is doing well, there is hardly any criticism. The limelight of victories tend to push the passengers in the background, and those who are winning matches for their sides get into the focus of the world and from that stage, it is difficult to move anywhere. This is why, when it was announced that Steven Smith would return home to take rest for the busy summer ahead, there was stinging criticism of Australia s decision. For those still uninitiated, the decision to drop out from the remainder of the Sri Lanka tour was not Smith s alone; chief selector Rod Marsh and Darren Lehmann were the ones to persuade Smith to take a break at a time when Australia needed their captain the most.

Yes, it was one of the most bizarre, outrageous and daft decisions made in the recent times. Smith s predecessor Michael Clarke, the man who lived on the philosophy of I have not seen anyone going up by doing less , was among those to criticise the decision and rightly so. But today, it is not just Clarke, but two of the greats in Steve Waugh and Matthew Hayden who have given Australian cricket management some unsolicited, but very important advice.

When Smith broke into the international cricket scene around six years ago, Waugh was the one to term him as the most talented Australian cricketer after Shane Warne. Well, while the assessment did surprise many back then, but looking at how his career has panned out, one would only say that Waugh must be having some supernatural abilities to look into the future. Having begun his career as a spinner, Smith is now the Australian captain, and most importantly, one of the best batsmen in the world.

But this one of the best batsmen in the world factor has started showing its limitations with Smith, like it has shown with Virat Kohli (in England) and Kane Williamson (in recent India Test series). Smith struggled against moving ball in England in 2015 and against spin in Sri Lanka. When Australian batting struggled categorically in Sri Lanka, Smith could not do much to prevent the danger, despite having serious amount of knowledge and experience to bat in the subcontinent.

Waugh s assessment here, that Smith will have his captaincy redefined by the six Tests at home three each against South Africa and Pakistan is spot on. Smith would know that Australian Test side is far from where he wants his team to be, and he will have to get the best out of him as well as the team to turn the tables. If he fails, David Warner has already emerged as the strongest contender. But then, even if Smith is able to hold South Africa and Pakistan, it still would not prove that Australia will be able to do better in England or in the Indian subcontinent, where they have faced three consecutive whitewashes.

Another point that Waugh has made is an intriguing one. Cameron Bancroft, who is considered as one of the best red-ball batsmen among young cricketers in Australia, has been made to wait for far too long. The nearest that Bancroft came to playing international cricket was when he was selected for Australia s tour of Bangladesh in 2015, but the tour was eventually called off. Bancroft s debut is now over-delayed, as Australia did not even give him any chance in the back-to-back series against New Zealand as well as West Indies.

On the other hand, Hayden, who in a stinging criticism termed Australian cricket system absolute horse shit , is wrong neither. Hayden had appealed Australian cricketers to take back control of the power in the team management, following their 0-3 defeat to Sri Lanka in the away series earlier this year. While Hayden appealed to the cricketers about the two mentioned points, he also said that the very fabric of the baggy green was of the players to actually dig in as a group and build the culture .

Neither Waugh nor Hayden are wrong in their assessment. Perhaps it is time for Australian cricket system to end their infatuation with the modern methods, and for being over-cautious. No cricketer actually becomes a better version of him by playing less. Legendary cricketers in the past have spent nights drinking, and have turned up the next day smashing the daylights of the opposition as if it is a walk in the park for them.

Perhaps it is also the time for Darren Lehmann and co. to go back to how they began this journey. When Lehmann took over as coach, the Australian cricket team was in tatters. The pressure to perform, submit homework, and strict guidelines made cricket boring. But Lehmann came in and relaxed the group, got them cracking jokes, have them had a few beers and most importantly, made them enjoy their cricket. Since then, it might have lost a lot, but it also won two massive tournaments ICC Cricket World Cup 2015 and The Ashes 2013-14. None of those were easy winning a tournament competing with the best of the world and inflicting a 5-0 defeat on a quality Test side so will be the months to come, when Australia will face some of the best at home and then fly out to India in a bid to prevent their fourth straight whitewash in the subcontinent. 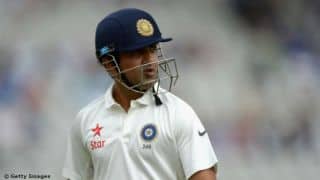 Gautam Gambhir lashes out at cross-border terrorism from Pakistan