No West Indies bowler was spared, and the bowling card made abysmal reading.

[Note: The only other team for whom four men have gone for over 10 an over has been Bangladesh, in 2007-08 against New Zealand, and at Queenstown. On that occasion New Zealand had chased down 95 in 6 overs without losing a wicket.] Abject submission Whatever chance West Indies had of coming close to the total was lost after three early blows: the experienced Kyle Mills took out Charles in the third ball of the innings; Mitchell McClenaghan removed Simmons and Powell in quick succession; and Chadwick Walton fell to Ryder. All McCullum had to do was to get the 20 overs bowled in time. He got a couple of overs out of Guptill, and held back Adam Milne after giving him a single over. Once the match was decided, he gave Milne another over. West Indies finished with on 124 for 5 with Bravo scoring a 54-ball 56 not out. What followed?

Congratulations on the new record Anderson, I would love to see the highlights of your innings Shahid Afridi (@SAfridiOfficial) January 1, 2014

– Afridi woke up on New Year s Day to the news of his world record being broken. He had not heard of Anderson when he went to bed the night before, and was only informed by his nephew on New Year s morning. He immediately tweeted a congratulatory message for Anderson. However, when he announced his retirement from ODIs in December 2014, Afridi stated that his only regret was that his record for the fastest ODI hundred does not remain anymore. – New Zealand won by 58 runs after West Indies stumbled during a chase of 286 at Nelson. They finished on 134 for 5 after 33.4 overs (they required 193 to win the match). West Indies came back with a vengeance at Hamilton, scoring 363 for 4 and bowling out the hosts for 160. – Anderson won an IPL contract for Mumbai Indians in 2014. Brief scores: New Zealand 283 for 4 in 21 overs (Jesse Ryder 104, Corey Anderson 131*) beat West Indies 124 for 5 in 21 overs (Dwayne Bravo 56*) by 159 runs. (Abhishek Mukherjee is the Chief Editor and Cricket Historian at CricketCountry. He blogs here and can be followed on Twitter here.) 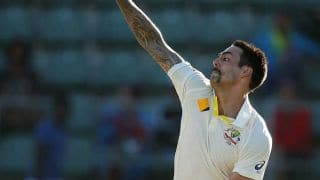