The story is about a day’s cricket when not a single bail was dislodged at one end.

In the historic Test that started January 2, 1906, not a single bail was dislodged throughout a day’s play. Abhishek Mukherjee investigates the curious goings-on.

Jack Board rendered yeoman services to Gloucestershire for almost a quarter of a century before The Great War. As Wisden pointed out, “he never the best in England, and for this reason his appearances in representative elevens were few.”

But even then, Board had 1,206 dismissals, which puts him at joint 11th on the all-time list. He also scored 9 hundreds in an era when wicketkeepers were not expected to score a lot of runs. He was good enough to hold his place in a team consisting of WG Grace and Gilbert Jessop, playing the perfect foil to the glamorous superstars.

Curiously, all his 6 Tests came on South African soil — 2 in 1898-99 and 4 in 1905-06. The incident took place during the second tour, where Board was the first-choice wicketkeeper. His understudy Leonard Moon was essentially a batsman who kept wickets if needed. Indeed, Moon kept wickets in only 1 of the 4 Tests he played on the tour — the one Board didn’t play.

The first Test was played at Old Wanderers, Johannesburg, was South Africa’s first ever Test win. They won the second, third, and fifth Tests as well to clinch the series 4-1, and cricket saw the rise of a third force.

The first win was built on one of the greatest last-wicket partnerships in history. England, bowled out for 184, did away with South Africa for just 91. The hosts, eventually set 284, were reduced to a hopeless 105 for 6.

The Dave Nourse joined Gordon White in a 121-run stand, but even that was not sufficient. When last man (also captain-wicketkeeper) Percy Sherwell joined Nourse, they needed another 45. They did it.

The exact date or moment is probably not easy to narrow down. However, we will scan the sources one by one. This is what Referee reported: “The defence was so good and the wicket-keeper so disinclined to remove the bails, unless there was a good chance of a run out or a stumping, that during six hours of play the bails at one end the bails were not once removed.”

This was interesting but not outrageously impossible, but there was more to the story. Now I will refer to The Telegraph. The report reads: “Remarkable to relate, that particular set of stumps was never once hit by the ball during the whole innings.”

Likewise, Captain EW Ballantine, the journalist who had toured with MCC thrice to each of Australia and South Africa, wrote in The Brisbane Courier: “I was touring South Africa in 1905-6, with P. F. Warner’s team, and at Johannesburg in that remarkable one wicket win by England one day the wicket at one end was undisturbed through any cause.”

Ballantine points out the match, and we can safely agree on that there was a long, almost a day-long phase when the stumps of one end were not affected.

Now, what had happened? Do note that The Referee mentioned that the wicketkeeper was in no mood to dislodge the bails.

As before, let me quote the three sources. First, The Referee: “The caretaker discovered during an interval that a spider having climbed the stumps had carefully spun his web between the stumps, twining it round the bails. These were thus secured to the top of the stumps.”

The Telegraph: “Board, the wicketkeeper, drew the attention of Sir Pelham Warner, to the fact that when the opening batsmen of the opposing side were going in to bat, a spider had begun to weave its web across the three stumps. Sir Pelham told the stumper not to brush it away and the spider carried on with its work, running up and down the stumps; Remarkable to relate, that particular set of stumps was never once hit by the ball during the whole innings, and the spider was undisturbed all the time it was weaving its web.”

Ballantine: “He [Board] examined the wicket and to his surprise he found that a spider had actually made a web at the top of one of the stumps in the corner by the bail. I saw the web, and so can vouch for its authenticity.”

Was the spider responsible for the bails staying put? Or could the spider spin its web to glory because the ball never hit the stumps? Alas, there was no technology to aid us to come to a conclusion in an era predating the Spider-Cam.

In their obituary, Wisden called Board “fearless”. One can hope ‘fear’ covered arachnophobia. 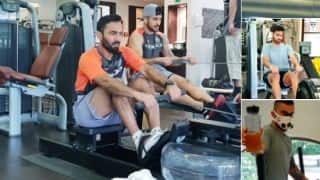 In pictures: Virat Kohli, Dinesh Karthik along with others train ahead of Ireland T20I series