Pratik Singh has been nominated for this year’s Arjuna Award. 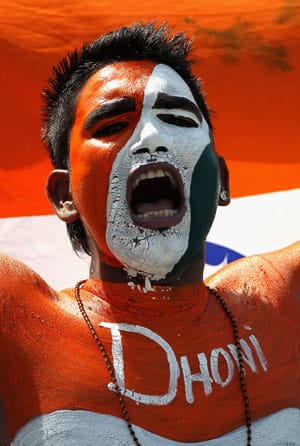 Pratik Singh, a 21-year-old Indian cricket fan who never lost hope in Team India’s coming back in the just-concluded Test series against England, has been nominated for this year’s Arjuna Award for his “outstanding achievement in the field of cricket”. The Sports Ministry took this decision as Pratik was reckoned to be the only person related to cricket who showed a fighting and indomitable spirit.

“The Awards are given not only for sporting achievements but also for carrying a positive attitude that can promote a culture of sports in the country,” Union Sports Minister Ajay Maken told Faking News. “Pratik was the only person remotely related to cricket who displayed both these qualities.”

Maken said that Pratik’s passion for cricket and an undying faith in the Indian team’s abilities were unmatched in the country and the Ministry decided to award him for his efforts.

“When everyone was celebrating Anna’s victory, Pratik was awaiting Indian victory in Test matches. Not even the Indian cricketers playing in England had the same level of faith in their own abilities as was displayed by Pratik,” Maken explained, “For example, he believed that Suresh Raina was all set to score a century in the second innings at The Oval and save the match. You see.”

This is for the first time that a “fan” has been awarded with any national sporting honor, but experts believe that perhaps the decision of the Sports Ministry was not way off the mark.

“Pratik is a regular feature in his colony’s cricket team and last week he was fined with two Cosco tennis balls for playing big shots,” Ravi Jadhav, a cricket expert of Kalyani Nagar analyzed the events, “His average with bat and ball in the last month were better than the whole of the Indian team on England tour.”

When Faking News contacted Pratik from comments, we were told by his younger brother that he was sleeping and he couldn’t risk waking him up.

“Last time I woke him up he beat me up because Sachin Tendulkar was batting on 99 in his dreams,” Pratik’s younger brother expressed his helplessness.

In a related development, BCCI has requested Sports Ministry to take up “Test cricket” under government control, even as the board would continue with promotion of Twenty20 and ODI games.

“This way Test cricket will also be brought under Lokpal,” a BCCI member explained the “benefits”. It should be noted that BCCI can’t come under Lokpal right now as it was not a government organization while IPL was made up of private bodies.

(Reproduced with permission from Fakingnews.com)