Mukesh Narula, the former Baroda player, was appointed coach of the Canada cricket team in August 2014.

Mukesh Narula, the former Baroda player, was appointed coach of the Canada cricket team in August 2014. His appointment came at a time when Canada lost its One-Day International (ODI) status and were left without the funds to keep their cricketing ambitions going at a good pace. Nishad Pai Vaidya spoke to Narula about Canadian cricket and the innovative solution they have come up to tackle their problems.

Mukesh Narula knows how to take on challenges as a coach. In 2010-11, a young Baroda side fought their way to the final despite some of their mainstays missing in action. Narula was at the helm then and mentored the side to beat odds. Had they beaten Rajasthan, a team looking to script a fairytale, in the final, Baroda would have written its name in history. Three years down the line, Narula faces another challenge, albeit of a different nature and in a land miles away from home in Baroda. In August 2014, he was appointed coach of the Canada side at a time when they lost their One-Day International (ODI) status.

I came to Canada in April 2011. Since then, I have been associated with Cricket Canada (CC). Earlier this year, I applied for the post of the coach and was selected for the job, says Narula. It isn t going to be an easy ride though! The loss of the ODI status has huge implications on the way things work as they do not get the funds from the International Cricket Council (ICC). Canada is a big country and players are spread all over. If one player has to come to a centre for a camp, it could cost him 1,000 dollars and then there is the staying cost. So, if 10-15 players travel for a camp, it costs a lot of money, says Narula. Without those grants from the ICC, it is very difficult to fund such an expensive exercise.

CC have come up with an interesting solution with Narula in the thick of things. Instead of all the players flying down to one centre, which is expensive, they now send the coach around the country. If he is in Vancouver today, he may be in Calgary or Edmonton tomorrow. On such trips, he meets players and works with them in the nets and on the field. Losing ODI status may be a blow to their psyche, but this is done to give them the belief that things are moving and that the future has a lot in store.

But, is there an issue with facilities? Narula says that they have good structures in place to keep the game going, No problems with facilities. The kind of facilities we have are good. There is now a beautiful cricket ground in Surrey. Calgary has a beautiful ground as well, which doesn t have a turf wicket, but it is about to get it. There is one in Edmonton and of course in Toronto. Even the government is getting involved and giving huge support.

The expats of course come to the Canada and participate in the game, but the second or third generation Canadians are also taking up the game. This is a very diverse country with people from all over the glove. There are South Asians, Australians, West Indians etc, says Narula. Some of these communities have also formed their own cricket clubs across the country.

Narula says, Canada has a cricketing history. They were the first associate nation to play the World Cup. In between, there was some ground lost but now the game is getting huge support. Despite, the setbacks, Narula is quite optimistic about the future and believes they can chart out a bright future. They don t have a problem as far as the players are concerned as they have a talent pool. For example, Calgary has 50 teams competing, Vancouver has 40. In Toronto alone, there are 6,000 players participating in club cricket.

And, there is some serious talent representing Canada in international cricket. Jeremy Gordon touches the 150-mark and was recently invited to play club cricket in Sydney. Khurram Chohan has a lot of experience and then there is Dhanuka Pathirana, the former Sri Lankan First-Class cricketer with over 8- games to his credit. Pathirana also holds the record for scoring 277 off 72 balls in a club T20 match in England. We have a very good blend of youth and experience in Canada at the moment. We are also working hard to get back, says Narula.

We are now preparing for the World Cricket League (WCL) which will be held in Namibia from February 7 to 24, 2015. We have gone down to WCL 2 and we will be competing with Netherlands, Kenya and Namibia. We are working hard towards that. If we finish in the top two, we will qualify for the WCL 1, which would be a boost for our aim to get back, says Narula.

They say that necessity is a mother of all inventions. Narula s trek around Canada is certainly an innovative approach to keep the team together and the spirits high. There will of course be a camp before the WCL 2, where the players can bond, but Narula is now the fulcrum that holds them together. Canada eye that comeback and Narula has a very critical role to play. 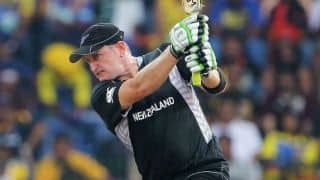 Scott Styris becomes only 2nd player to get T20 double of 4000 runs and 100 wickets during Hobart Hurricanes vs Northern Knights, CLT20 2014 Match 9 at Raipur