A look at some of the stats highlights for Sri Lanka at the World Cup since its inception in 1975.

Sri Lanka, the World Cup winners in 1996, have been one of the more consistent teams. They have made it to the final four five times, reaching the final thrice. This year, the semifinalists of the 2015 World Cup will head into the World Cup led by Dimuth Karunaratne.

Here’s a look at some of the stats highlights for Sri Lanka at the World Cup since its inception in 1975.

– Sri Lanka s highest total at the World Cup came during the 1996 edition, when they blasted 398 for 5 against Kenya in Kandy. Aravinda de Silva led the charge with 145 off 115 balls.

– Kumar Sangakkara is Sri Lanka s leading-run getter in the World Cup with 1532 runs. Sangakkara played four World Cups, making his debut in 2003 and went on to surpass the likes of Sanath Jayasuriya and Tillakaratne Dilshan, who tally 1165 and 1112 runs respectively.

– A factors behind that average also boils down the number of centuries Sangakkara has at cricket s biggest tournament. In four World Cups, Sangakkara has five centuries, four of which came on the trot during the 2015 World Cup which ensured Sri Lanka made it to the semifinal.

– Dilshan, who is Sri Lanka s third-highest run-getter holds the record for the Sri Lanka s highest individual score at the World Cup. His unbeaten 161 against Bangladesh arrived during the 2015 World Cup in Melbourne, where Dilshan hammered 22 fours at a strike rate of 110. Sri Lanka went on to beat Bangladesh comprehensively by 92 runs.

– Former captain Angelo Mathews has the highest-strike rate among all Sri Lankan players. Mathews hasn t really set the World Cup on fire, with just 289 runs from 10 innings, but those runs have come at a SR of 94.13, ahead of Dilshan, Jayasuriya and Sangakkara

– Sangakkara and Ranatunga have the maximum half-centuries for Sri Lanka, 7. However, in terms of the most 50-plus scores in the World Cup, the wicket-keeper batsman leads the chart with 12 such scores, three more than the next in line Mahela Jayawardene, who tallies 9.

– He may have led Sri Lanka to their only World Cup triumph in 1996, but Ranatunga wasn t always the best with the bat. He has the maximum of ducks for his country at the World Cup and ties the record with Jayawardene. Jayawardene however has four hundreds, while Ranatunga has not reached the three-figure mark even once.

– Jayasuriya has also taken the highest number of catches by a Sri Lanka cricketer in a World Cup, 18.

– Jayawardene has the most runs in a single edition of the World Cup for Sri Lanka. He scored 548 runs at an average of 60.88, with one century and four fifties during the 2007 edition and played a key role in Sri Lanka reaching the final in the West Indies.

– Jayawardene and Muttiah Muralitharan have played the most World Cup matches for Sri Lanka 40. Both played five World Cups for their country.

– Dilshan and Upul Tharanga hold the record for Sri Lanka highest partnership for any wicket in the World Cup. They put on 282 runs in Pallekele against Zimbabwe in 2011 as Sri Lanka romped home by 139 runs, Dilshan was adjudged Player of the Match for his knock of 144.

– With 68 scalps, Muralitharan is Sri Lanka s leading wicket-taker, ahead of Chaminda Vaas and Lasith Malinga, who have 49 and 43 wickets respectively.

– Vaas, however, has produced the best bowling figures in an innings by a Sri Lankan. His 6 for 25 against Bangladesh in 2003 gave Sri Lanka a comfortable 10-wicket win with 173 balls to spare.

– Sangakkara has affected the most dismissals by a Sri Lankan wicketkeeper in the World Cup. In 37 matches, Sangakkara has taken 41 catches and affected 13 stumpings. The next in line in Romesh Kaluwitharana, who is miles behind with 12 dismissals. 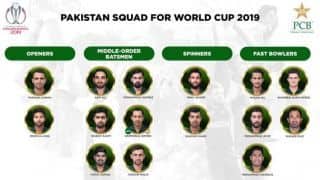