One this was a mediocre 244-run target by ODI standards. Albeit batting on a used pitch, you would assume the Black Caps line-up at least on paper has the wherewithal to chase down 250-odd.

At 97-3, when Kane Williamson was dismissed, Lord s fell silent. Anybody not wearing yellow on Saturday simply assumed New Zealand s hopes of beating their arch rivals Australia had gone up in smoke. Alternately, social media was debating how the chase was now over. It wasn t a surprising assertion, and on two counts.

One this was a mediocre 244-run target by ODI standards. Albeit batting on a used pitch, you would assume the Black Caps line-up at least on paper has the wherewithal to chase down 250-odd.

Williamson is a master batsman and undoubtedly any team would lean on such a batsman. For good reason though New Zealand are starting to stretch that dependency a bit too far. ALSO READ: Dazzling, dizzying Australia keep re-writing the script as they go from strength to strength

He is their leading run-scorer of course, but this isn t the statistic that really matters first. Sample this. In eight matches, New Zealand haven t crossed the 300-mark even once. Their highest score in this 2019 Cricket World Cup is 291-8 against West Indies at Manchester. In their other game batting first, against Pakistan, the Black Caps only managed 237-6. ALSO READ: Mitchell Starc s five-wicket haul leads Australia to clinical 86-run victory

In five other matches, New Zealand have chased. Let us leave out the wins against Sri Lanka (137-0 chasing 136) and Afghanistan (173-3 chasing 172) the Black Caps laboured against Bangladesh (248-8 against 244) and South Africa (245-6 chasing 241). Against Australia at Lord s, they simply collapsed to 157 all out, hurting their precious run-rate in the process.

The lack of runs is evident here. Williamson leads the charts with 454 runs in six innings and is keeping pace with the best batsmen in this tournament. Then, there is a grand chasm New Zealand s second-highest scorer is Ross Taylor with only 233 runs in six innings. He averages 38.83, which is a pale shadow of his ODI average (91.28) in the past year.

Taylor isn t the only problem though. Like Williamson, he runs out of partners in the middle. Putting it mildly, the other New Zealand batsmen simply aren t spending enough time in the middle. It is amply evident from the fact all-rounders Jimmy Neesham (182 runs in five innings) and Colin de Grandhomme (155 runs in five innings), who bat much lower down the order, are among their top-five run-scorers in this tournament. Tom Latham (41 runs in six inning) is their biggest disappointment.

Much of the guilt for any stuttering New Zealand innings lies at the doorsteps of their opening batsmen Martin Guptill (158 runs in seven innings) and Colin Munro (125 runs in six innings) have simply not been an evolving partnership that other teams boast of. It is a matter of striking concern, one that the New Zealand team management has failed to rectify at the earliest.

Surprisingly, their attack, led by Trent Boult, has been busy etching out early wickets in the first ten overs. But at the same time, they have failed to notice issues in their own top order, which habitually gifts early wickets to the opposition every game.

Loss to Australia seems a big hurt in this regard. With Williamson gone, it was a chance for the other batsmen to stand up and be counted. Yet, the innings followed a similar pattern to their previous games, especially when Taylor miscued and holed out. Afterwards, it was a procession of wickets, so much so that Pakistan will now hope to scale their net run-rate, if it comes to that.

This is where the second point emanates. Two of their bowlers, Lockie Ferguson (17 wickets in seven matches) and Trent Boult (13 wickes in seven matches) are in the top-five wickets takers list. It is marginally better than Australia, and immensely better than India, particularly as the latter is the best bowling unit in the tournament. For the Men in Blue, this aspect must do more with their strength in variation of bowlers. For Australia and New Zealand, it is purely in the number of wickets.

The underlying point is simple. There are not enough runs on the board, and Williamson cannot possibly score more than he is currently. And New Zealand batsmen are undoing the good work put in by their bowlers, and more importantly, will not be serious challengers for that elusive World Cup. It is a great imbalance one that doesn t work in ODI cricket anymore.

Perhaps India are the best example herein their batsmen have underwhelmed in previous two games against Afghanistan and Australia. Even so, they dug in deep to put just enough runs on the board. New Zealand batsmen, through lack of experience or form, have been found wanting in this regard.

Those two teams, and others like Sri Lanka and South Africa (on current form), or even Bangladesh, will perhaps not hurt this runs-to-wickets imbalance. But when in the knockouts, from New Zealand s point of view, teams like Australia and India will hurt them. If the Men in Blue beat England at Edgbaston on Sunday, they will take the Black Caps along with them to the semi-finals.

However, unless the Kiwis rectify this deficiency in their World Cup campaign, they will only be in the last four to make up the numbers. 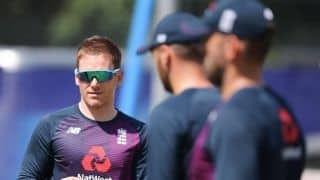