With the ICC Cricket World Cup 2019 on the horizon we look at highest run-getters from each season of the World Cup starting from 1975 in which New Zealand s Glenn Turner scored the maximum, 333 runs till the 2015 World Cup where another Kiwi, Martin Guptill topped the run charts with 547 runs.

In the inaugural eight-team edition, West Indies beat Australia in the final, but it was New Zealand s Glenn Turner who topped the run-scoring list, scoring 333 runs in four matches. NZ were knocked out in the semi-finals by WI. Turner started the campaign is style hammering 171 off 201 balls against East Africa and then went on to score another century, this time against India (114) and finished the tournament with an average of 166.50.

West Indies second title came on the back solid all round performance and leading from the front with the bat was opener Gordon Greenidge, who scored 253 runs in four matches. His best of 138 not out came against India at Birmingham and he added two more 50s during the tournament.

David Gower of England topped the run charts with 384 runs in seven matches scoring at an average of 76.80, and a rather surprising strike rate of 84.95, to keep the great Sir Vivan Richards in the second place (367). Sir Viv managed a strike rate of 81.19. Gower scored a hundred (130 against Sri Lanka off 120 balls) and made a 50 in the tournament.

The veteran England batsman Graham Gooch made 471 runs in eight matches at an average of 58.87, leading England to the final, which they eventually lost to Australia. Gooch hit 45 boundaries throughout the tournament and made one hundred and three fifties. His best came against India when he scored 115 at the Wankhede Stadium, knocking the hosts out in the semi-final.

The year New Zealand experimented with spin as an opening bowling option and sending in pinch hitters at the top of the order, it was the great Martin Crowe who stood tall with 456 runs in nine matches. But, he was injured for the semi-final against Pakistan as NZ succumbed to the then young batting sensation, Inzamam ul Haq. Crowe managed to score at an average of 114.00 and with a strike rate of 90.83. His best was 100 not out that came against Australia at Eden Park, Auckland and added four 50s to his tally.

In 1996, Sachin Tendulkar became the first cricketer to breach the 500-run mark in the tournament. Tendulkar ended with 523 runs in seven matches at an average of 87.16 and strike rate of 85.87. He scored two hundreds and three 50s hitting 57 fours and seven sixes. His best came against Sri Lanka when he scored a run-a-ball 137 at the Feroz Shah Kotla.

In one of the tougher conditions to bat in, Rahul Dravid s class shone through as he scored 461 runs in eight matches at an average of 65.85 and strike-rate of 85.52. His highest score of 145 came against Sri Lanka at Taunton where he joined forces with Sourav Ganguly (183) to post a record second-wicket partnership of 318 runs. Dravid hit 49 fours throughout the tournament and scored three fifties.

In 11 matches, Sachin Tendulkar amassed 673 runs at an average of 61.18 and a strike-rate of 89.25, which remains till date the most runs in a single edition of the tournament. India made it to the final, only to lose to Australia. Tendulkar his six 50s and one hundred in the tournament with his best 152 coming against Namibia.

Australia s Matthew Hayden was in marauding form in 2007 as Australia lifted the World Cup Trophy for the unprecedented third time in a row. Hayden made 659 runs in 10 matches in Carribean at an average of 73.22 and a strike-rate of 101.07. He hit three hundreds and one fifty in the tournament. His best of 158 came against West Indies.

The year India won the title, finalist SRi Lanka s Tillakaratne Dilshan topped the run charts with 500 runs in nine matches, while Tendulkar made 482 runs in the same number of matches. Dilshan s 500 came at an average of 62.50. His best of 144 came against Zimbabwe.

Guptill become the first player in the history of the World Cup to score a double ton, hitting 237 not out against the West Indies and went on to make 547 runs in nine matches, leading New Zealand to the final. He scored at an average of 68.37 and maintained a strike-rate of 104.58. He scored one fifty and two hundreds in the tournament. 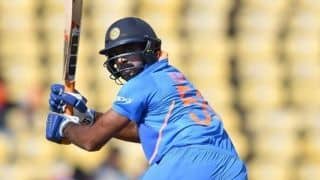