India arrived in England in 1983 without expectations. What unfolded was a magical and memorable journey that culminated in a historic day at Lord s.

Ahead of the ICC Cricket World Cup 2019, where Virat Kohli will lead the Indian cricket team for the first time at a World Cup, we at CricketCountry are recapping the best of India‘s wins at the quadrennial ODI championship.

In today’s edition, a look back at the 1983 World Cup final at Lord’s.

Any Indian cricket fan of a certain age will remember where they were on June 25, 1983 and any cricket fan will tell you it was the day that Indian one-day cricket came of age.

Once Srikanth and Mohinder Amarnath, whose sheet anchor 26 would prove to be invaluable, were separated Yashpal Sharma s fine tournament ended in failure, and Kapil Dev, Kirti Azad and Roger Binny all stumbled. Sandeep Patil and the lower order rallied to get the total to 183, crucially ensuring India batted for 54.4 overs.

Balwinder Sandhu took new ball and gave India an immense breakthrough, foxing Gorden Greenidge with an inswinger that hit the West Indies opener on the fingers and crashed onto stumps. It was the first of two pivotal moments.

Having tonked three fours in succession, Richards sized up a length ball that he thought would fetch him a fourth, but the ball took the top part of the bat and spiralled in the air over midwicket. Kapil never lost sight of the ball as he sprinted backwards about 20 yards, smiling as he ran. In the end he covered good ground and pouched the catch that won the match and sparked manic celebrations back home.

Three wickets left West Indies at 66/4, and when a hobbling Lloyd drove Madan Lal to Kapil in the covers, the score was 66/5. It got worse at 76/6, but a stubborn rear-guard effort between Jeff Dujon and Malcolm Marshall threatened to undo all the good work. Then Kapil called Amarnath into the attack and, in typically languid style, he removed the pair to leave West Indies at 124/8.

Amarnath ambled in, the ball hidden behind his back, and proceeded to stun the defending champions with his unassuming slow medium pace that hit the seam and produced surprising bounce. The moment of madness came when Amarnath won an instant lbw shout against Michael Holding, a picture captured on TV and photographs for all Indian fans to cherish forever.

Years later, Kapil would write of India’s biggest cricketing achievement: “Mohinder has the laziest, relaxed way of bowling, as if he’s jogging. But these are deceptive moves as he trips them by making the ball wobble and induce all kinds of indecisiveness in batting.”

Having won the Man-of-the-Match award in the semis, thanks to two wickets off 12 parsimonious overs and a workmanlike 46, Amarnath was in the thick of things at Lord s against the mighty West Indies. And that magnificent effort earned him another match honour, and his smile shone brightest on that unforgettable day. 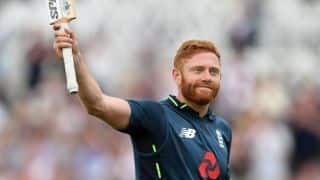 HH vs GG, Match 3, Saurashtra Premier League 2019, LIVE streaming: Teams, time in IST and where to watch on TV and online in India