The World Cup opener was a big statement from Archer, who makes England stronger.

Patience is a virtue, so the saying goes. The men who matter in the realm of English cricket were patient with Jofra Archer, waiting for him to qualify to represent England after his success for Sussex and several T20 franchises apart from the Under-19 level for Barbados and West Indies.

As soon as the Barbados-born allrounder qualified to play for England this year, he was fast-tracked into the limited-overs squad. Next, into the World Cup squad. On Thursday, Archer made his World Cup debut against South Africa at The Oval and, in his fourth match for England, struck three massive blows for the hosts as they steamrolled their opponents by 104 runs.

Promoted to new-ball duties alongside Chris Woakes, the 22-year-old began with a spell of 2/20 in five overs and later returned to get rid of Rassie van der Dussen for 50. He finished with figures of 7-1-27-3 to go with an unbeaten seven off three balls earlier in the afternoon.

Those figures, as good as they look, do not tell you about the intensity, accuracy and aggression with which Archer bowled in front of a near full house at The Oval. For starters, there was the bouncer that sent Hashim Amla off the field. The veteran South Africa batsman was beaten for pace and took a blow on the helmet, then received on-field treatment before leaving the field.

Archer kept bowling fast, and found his first wicket when Aiden Markram poked an edge to Joe Root at slip. The key here was a bit of bounce and extra pace. Archer jumped and punched the air as his team-mates ran towards him. In the stands, a sea of England fans were on their feet. A few beer-swigging men in the stands behind third man shadowed Root’s catch at slip with animation.

In his next over, Archer suckered South Africa captain Faf du Plessis into a pull. The ball was banged in, du Plessis chased it. But it had too much pace on it and he ended up top-edging it to Moeen Ali at fine leg. This time Archer stood his ground, pumped his fists and roared. You knew how much that wicket meant to him.

In the span of six balls, he had changed the tone of South Africa’s chase. Truly, moments like these are match-winning. They thrill the senses, lift a team’s mood. And they often come from players who, like Archer, have a certain je ne sais quoi about him.

Archer came back to bowl the 32nd over and struck with his fifth delivery, this time getting the well-settled van der Dussen to mistime a shot to mid-on. Yet again, Archer’s pace and a bit of bounce undid a South African batsman.

This is what England picked him for. This is what the fans expect of him. This is what could prove defining in England’s World Cup campaign. They are not ranked No 1 without reason, and now with Archer they appear an even stronger force.

The buzz about Archer – described by Ben Stokes as the most naturally-gifted bowler he has seen – was palpable, and after he returned from the IPL with 11 wickets, three catches and a couple vital cameos for Rajasthan Royals the cries for him to be included in England’s World Cup squad grew louder.

Andrew Flintoff urged the selector to drop “anyone” to get Archer in. Michael Vaughan vowed to take off his clothes if Archer wasn’t picked. In his second ODI last month, Archer conceded just six runs in four overs in a wicket-taking spell before rain washed out the game. The chants grew louder.

But Archer’s arrival into the England squad was not without criticism. Woakes, the man with whom Archer opened the bowling at The Oval, said that his selection so close to the World Cup would be morally unfair . David Willey questioned the logic of fast-tracking Archer into England s ODI team. As it turned out, Willey was the man to make way for Archer in England’s World Cup squad, a decision which Eoin Morgan termed the toughest he’s been a part of as England skipper.

Thursday’s World Cup opener was a big statement from Archer, a cool-headed young player not overawed by the occasion. The patience is paying off for England, and Archer is justifying the hype. 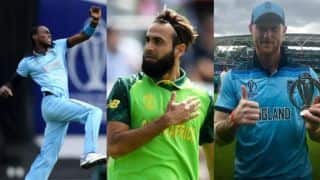 Cricket World Cup 2019: We have been outplayed in all three departments: Faf du Plessis