Cricket World Cup 2019: List of players who have scalped most five-fors

Cricket World Cup 2019: List of players who have scalped most five-fors

Cricket World Cup 2019 -- We take a look at players, who have scalped the most number of five-fors at the global showpiece event.

With little less than a fortnight left for the ICC World Cup 2019 to begin in England, we take a look at players who have scalped the most number of five-fors at the global showpiece event.

Left-arm Australian pacer Gary Gilmour played just three years of international cricket in the mid-1970s, but that was enough for him to make a lasting impression. The New South Wales cricketer, who passed away in 2014 at the age of 62, claimed his biggest feat in the 1975 World Cup when he pocketed 11 wickets including two five-fors at a staggering economy rate of 2.58 which puts him on top of the elite list. Gilmour got to play his first match in the semi-final against England at Leeds which was just his third ODI overall. Till then, he had just taken three wickets. He vindicated his captain Ian Chappell s decision to open the bowling attack rocked the hosts taking six wickets for just 14 runs in 12 overs at an economy rate of 1.16.

Close on the heels of Gilmour is West Indies pacer Vasbert Drakes, who picked up 16 wickets in the 2003 World Cup in just six matches. However, despite his heroics, Vasbert, second in the list with two five-fors in the edition, but a much heavier economy rate 4.01 West Indies failed to qualify. The Barbadian-born fast bowler Drakes is remembered for his 5/44 against Canada in 2003 edition which ultimately paved the way for a seven-wicket West Indian win. Drakes also dismantled Kenya with his second five-wicket haul (5/33).

Ashantha De Mel was the joint second highest wicket-taker at the 1983 World Cup in England with a tally of 17 wickets at 15.58. The first of his two five-wicket hauls came against Pakistan at Headingley where he took a career-best 5/32 in Sri Lanka s narrow defeat by 11 runs. Against New Zealand, de Mel finished with 5/32 to help bowl the Kiwis out for 181 as Sri Lanka secured a three-wicket victory. This was Sri Lanka s only win from six games in the tournament.

Former Pakistan captain Shahid Afridi was the latest bowler to take two World Cup five-wicket hauls. Afridi, who captained Pakistan at the 2011 World Cup, returned with figures of 5/16 against Kenya and added, five more wickets to his kitty to finish with 5/23, and ensure a 46-run win for his team against Canada.

Glenn McGrath is the only bowler to have taken five-wicket hauls in two different editions of the World Cup. The first one came against West Indies at Old Trafford in 1999 when he returned with figures of 5/14. Australia comfortably won by six wickets. In the 2003 edition, McGrath bettered his figures by taking 7/15 against Namibia at Potchefstroom. Australia s victory margin of 256 runs was then an ODI record. 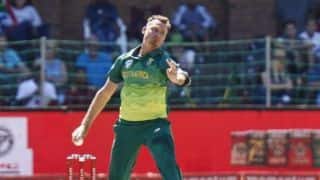 TKMNE vs SBS, Match 5, T20 Mumbai, LIVE streaming: Teams, time in IST and where to watch on TV and online in India