Net practice sessions can be boring, if you are quite used to observing them. Seldom, you will see a batsman or bowler try something different, and slowly work it into his game. It is a rather slow process. More often than not, this is witnessed during a long overseas tour, or ahead of an impending Test series.

For limited-overs cricket, the rituals are pretty simplistic. Come out, do what works for you and has over the years, relax and back into the bus. For years and years, MS Dhoni has had the same routine when it comes to net sessions for white ball formats.

Usually, he steps into the batting nets late, facing the spinners first. He knocks the ball around for a bit, bringing out the big shots slowly. Then, he steps in to face the pacers and finally takes a few throw-downs, if at all. All of this lasts less than 30 minutes, or so, as per routine.

Saturday, ahead of the all-important India versus Pakistan clash, was no different.

Key, however, is in detail. To the ordinary eye, it might seem that players are going through the motions, but the reality is different. Take for example, Dhoni s stint against the spinners on Saturday. He asked the net bowlers to send down deliveries to him in a manner he could prepare to face the likes of Mohammad Hafeez and Shoaib Malik.

He told me to come round the wicket, and throw down some flippers, or top spinners, like Pakistan spinners would do, said 17-year-old Praharsh Parikh. He is part of the Lancashire Cricket Club s Under-17 side and he travels to India often to learn as much as he can about cricket. He has been part of Rajasthan Royals junior group of players for the last four years as well.

Oh, and lest one forget, he is also the kid who bowled Dhoni.

I was stunned, simply stunned, he said, sheepishly, of the moment.

Stunned is an understatement. Coming round the wicket, he bowled a top-spinner that didn t bounce as much as Dhoni anticipated. He was on the back foot; trying to cut away and the ball went under his inside edge, knocking back his off stump.

Parikh was stunned, as he said, and looked back at his mates, his lips pursed in oh my god! freeze.

The kid bowled some more to Dhoni, as did other spinners, and not much was made of that moment. It happens; batsmen trying out different things in the nets, perfecting their shot selection for the match next day, get beaten or bowled, and what not. It has happened thousands of times to Dhoni, and other great batsmen before him. They shrug it off and move on, to the next net session, as did Dhoni.

It doesn t happen that often to Parikh, though. I have met Dhoni before in the IPL, whenever I train with Rajasthan Royals. But I have never bowled to him before. I didn t speak with him after that moment. I am just happy to have helped him in his preparation for the big game, said the young off-spinner, who looks up to R Ashwin and Gary Yates (former English off-spinner, now assistant coach at Lancashire).

Parikh then went to his fellow net bowlers, all of them from Lancashire, and chatted away. He was obviously telling them about that moment . He told everyone, and anyone, who would listen. There was a smile on his face, perhaps permanently etched. Well, atleast for the next decade; surely a story for grandchildren, some day.

His roots are in Ahmedabad, where Parikh was born. His parents father settled in the UK after his PhD, mother is a supervisor in retail sector moved to Manchester when he was 18 months old. Cricket though continued to flow in his veins. From age eight when he first picked up the sport, to captaining Lancashire U-17s, and maybe this Saturday afternoon has only rejuvenated Parikh s will to succeed as a cricketer.

After all, not every spinner gets to bowl Dhoni.

Who is your favourite cricketer? was an obvious question.

Virat Kohli! he replied, without even blinking.

Parikh didn t get to bowl at Kohli, who was content taking throw downs and preparing against the pacers. Maybe one day, soon! 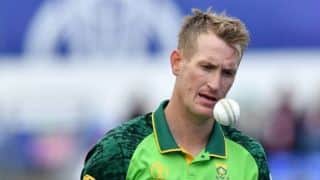 Cricket World Cup 2019 - There are a lot less worms in my head on the cricket field these days: Chris Morris 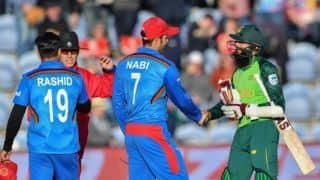