New Zealand opener Martin Guptill slammed the second-highest individual score in ODI history against West Indies in the quarterfinal of ICC World Cup 2015 at Wellington. He faced the first and the last delivery of NZ innings, facing 163 balls in total and milking 237 runs off them the highest in World Cup history. He was mighty lucky as after being given a life in the very first over when Marlon Samuels dropped him at square leg. He punished them for what proved to be a costly mistake in some style belting 24 fours and 11 sixes in a memorable display. The hosts rocketed to 393/6 and in reply, WI managed 13 more than Guptill.

Before Guptill’s quarterfinal fireworks, Chris Gayle had set the stage alight becoming the first batsman to hit a world cup double-century. After surviving a close call for lbw that stayed with the umpire’s not out decision on review, Gayle took his time before opening up in typical fashion. West Indies had managed 165/1 in 35 overs before the arrival of Gayle storm. He reached three figures with a single and then flicked one over backward square region for a six to announce change in intentions. His century came off 105 deliveries. His next 100 took him just 33 deliveries and thus becoming the first non-Indian batsman to score an ODI double-century. He was out off the final delivery and by then had ransacked 215 runs with the help of 10 fours and 16 sixes.

On February 16, 1996, South African opener Gary Kirsten became the first from his country to score a world cup hundred. After being put in to bat by UAE in Rawalpindi, SA were led by Kirsten’s record-breaking innings as they posted 321/5. Kirsten struck 13 fours and four sixes to make an unbeaten 188 off 159. During the course of his innings, he set a new benchmark for the then highest individual score at ODI cricket’s biggest stage. And he nearly broke the then all-time record of 189* needing a boundary off the final delivery to surpass that. However, he managed a couple. UAE managed 152/8 with SA winning by a huge 169 runs.

A record-breaking and one of the most memorable days in the history of Indian cricket. Sourav Ganguly and Rahul Dravid were at their aggressive best, in the peak of their powers, as they toyed with defending champion Sri Lankan bowlers hitting centuries. The duo put on a record partnership of 318 runs then an all-time record in ODIs. Dravid scored 145 off 129. Ganguly reached his century off 119 deliveries. Having reached three figures, Ganguly shifted gears. His scored 83 more off just 39 deliveries. His innings featured 17 fours and seven sixes. He was out off the penultimate delivery but not before hitting 183 which till date remans the highest by an Indian batsman at the world cup.

West Indies were still recovering from their defeat to England in the tournament opener. To make matter worse, Ravi Ratnayeke had removed Carlisle Best and Richie Richardson off successive deliveries. Then walked captain Viv Richards. His first task was to deny the hat-trick, which he did. And then to lead his team out of that nervy phase, which was accomplished after taking 62 deliveries to reach half-century. Then it was time to have some fun. A tenth ODI century came off 97 deliveries. The next 81 runs required a mere 33 deliveries. He broke the world cup record for the highest individual score by Kapil Dev (175) with a six. West Indies were 45/2 when he arrived. When he left, they were 343/4 and he his contribution was 181 with 16 fours and seven sixes. 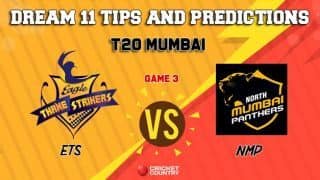