The base of Nair's bat is very thick, but pick it up and it is remarkably light.

BIRMINGHAM: Amid the hustle and bustle of spectators milling about or standing in line for beer and refreshments while New Zealand are playing South Africa in match 25 of the ICC Cricket World Cup 2019, the sight of a man hard at work, but making it look so easy, as he splices a bat handle with precision while ensuring the perfect line of the bow, catches your attention as you stroll around the Edgbaston Cricket Ground.

The man is clearly more than proficient at what he’s doing. He shaves the shape of an English willow bat, each motion of his hands in perfect assimilation to ensure the perfect weight and balance of the sample he’s working on. You are immediately drawn into his craft as he shapes the shoulder of the bat with a draw knife.

Then you notice three scribbled words on the face of one of the broad bats placed on the craftsman’s table, written in black sketch pen: ‘Karun Nair template.’

Is this the type of bat Karun Nair used to score his unbeaten 303 in a Test against England in Chennai in 2016?

“Yep, that’s the prototype,” says Alex. “Karun used one of them to score that triple-hundred.”

Nair’s bats are usually made at Gray-Nicolls’ India factory in Jalandhar, but he has also visited their workshops in England and Australia, says Alex.

“Karun likes the weight thicker in the middle, as you can see with that one there. He is picky,” he chuckles. “But very detailed and thorough. That helps us. Good guy.”

Nair’s first preference was the Powerbow6X, which he used to score that 303* to make him the second Indian Test triple-centurion after Virender Sehwag. Shortly before that Test innings, Nair had become, along with Vijay Shankar, the first Indian cricketers to sign with the famous English bat-makers Gray-Nicolls in over three decades.

The base of Nair’s bat is very thick, but pick it up and it is remarkably light. Alex explains the process.

“We feather the toe end of the bat, which takes out the weight,” he says as his hands work smoothly and steadily on the knife. “This doesn’t compromise on the balance or pick-up.”

Alex has been making bats for 14 years. Among the cricketers he has made bats for are Andrew Strauss, Kane Williamson, Jonny Bairstow, Shaun Marsh and Chris Woakes.

“Mark Ramprakash was the first cricketer I made a bat for,” he says. “And he was my idol, so it was a bit surreal. I was nervous.”

Did Ramprakash have any complaints about the bats Alex made for him?

“None, thankfully. Made my job easier.”

English willow is widely considered the gold standard of wood for quality cricket bats. England has the perfect climate and land for growing these trees in, says Alex. It takes about 15 to 20 years before the trees are taken out of the ground. There are plantations from Somerset to Yorkshire, but the main Gray-Nicolls bat factory is in Robertsbridge, East Sussex.

“It’s easier if the players come to you with a clear idea of what they want,” says Alex. “Sometimes they aren’t certain and then they ask for a few samples, which me duly make. But then sometimes they come back and aren’t impressed. You start doubting yourself. It’s not common, but yeah, sometimes it happens that you make a bat based on a batsman’s uncertain specifics and it goes to waste because it’s not what they expected.”

But by and large, Alex has had few complaints from international and county batsmen. As it turned out at Edgbaston, New Zealand skipper Williamson scored an exceptional century to lead his team to victory over South Africa a few hours later — with a Gray-Nicolls bat. 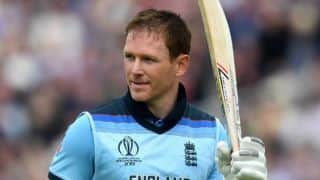