The Edgbaston 103* showcased everything that is beautiful about Williamson the batsman.

BIRMINGHAM: The mood at Edgbaston for match 25 of the ICC Cricket World Cup 2019 was distinctly from a different era. It was like an ODI from the mid-1990s, and not just because of the regularity with which hit 90s songs such as ‘Return of the Mack’ and ‘How Bizarre’ (both released in 1996) and later Michael Jackson’s ‘Black or White’ played out across the PA system at Edgbaston.

It was a throwback to the times when 241 could be a fighting total – remember them? – and batsmen finished chases with strike-rates of 71. No, not necessarily cool, but efficient and with tasty subplots.

Kane Williamson was bloody efficient at Edgbaston. His skill in sussing out the conditions and the bowlers was exemplary, and typical of his unflappable nature, New Zealand‘s captain controlled a chase of 242 in 49 overs by dinking singles, running hard, keeping the scorecard and strike rotating. All without having to take risks.

Colin de Grandhomme played his part stunningly, hitting 67 off 40 balls in an innings which his skipper termed as match-winning, but it was Williamson who was outstanding: 103 not out off 138 balls in a tense chase.

The subplots? They took care of themselves, because this is South Africa at a World Cup. Williamson was reprieved on 76 and 77, first when Quinton de Kock failed to identify a nick off Imran Tahir and then when David Miller ran to the stumps to collect a throw from Kagiso Rabada but failed to gather it. You need moments of luck in such testing conditions, and Williamson got them.

He walked out in the third over of New Zealand’s chase. He put on 60 from 78 balls with Martin Guptill, until Guptill trod on his stumps. Ross Taylor came and went, tickling Chris Morris off his toes to de Kock. Tom Latham nicked Morris. New Zealand were in trouble, or so it seemed. But on the day, Williamson summed powers from his reservoir of talent to craft a century that dripped with the bloody-minded confidence of a man with one mission.

The key to a successful ODI run-chase is to keep the score ticking over consistently through ones and twos, thereby never letting the pressure to build up. Williamson did that with the proficiency of a surgeon. The 50-run partnership between Williamson and Jimmy Neesham came up off 81 balls with just four fours. Slow going, but Williamson was sure of what was needed.

What was remarkable was the manner in which Williamson could keep rotating the strike. A nudge here, a dab there, a steer here, a chop there. Never did he look like getting out while batting, or taking undue risk. When he was beaten by Rabada and hit the ball straight back to Tahir and pushed Lungi Ngidi to the man at cover, Williamson threw his head back in frustration and punched his bat. Three times he was hit on the arm when trying to pull or chop the ball away.

(ALSO READ: South Africa have run out of luck, but are we surprised?)

What goes on in the mind of a batsman in such times, when the going is tough and there are bowlers you cannot score freely off?

“I guess it’s just trying to focus on the team situation,” said Williamson. “Look, it hit a few fielders. Sometimes you knew that you were going to have tough periods out there. So going into the innings, it was important that you tried to give yourself a little bit of a break because no one played the free flow innings except for, perhaps, de Grandhomme, which was obviously very nice to watch.

“But if you’re having to try and start an innings where the quality of the attack was going to bowl straight and hit an area for a long period of time ones were quite tricky, it sort of doesn’t really matter as long as the team is moving forward. If a guy at the other end hits a boundary and you’re looking at sort of four-and-a-half an over, then a large part of that over is achieved. In the back of your mind, you’re just weighing out where you want to be a little bit later on. So taking focus away from yourself and much more around the situation of where we’re going to be as a team is much more the focus.”

Come on, Kane, throw us a bone. You make batting look ridiculously easy, but surely the pressure gets to you, too?

“You always feel — some days it’s free flowing and you don’t have to perhaps negotiate as much as other days,” was Williamson’s assessment. “I guess you’re trying to be aware of it as much as you can. And then like I mentioned, a little bit different if you’re chasing a higher score perhaps on a better surface and you are required to perhaps push it at different stages.

“But with the totals we were chasing, albeit on a tough surface, it meant that you were going to face doubles, but if you were able to apply pressure at certain stages, it doesn’t have to be right here right now, which I guess is sometimes the thing that can cloud you, that can be in a few overs time. And if you’re able to communicate with your partner, hopefully, that can help with decision-making. And at the end of the day, you’re just wanting to make the best decisions you can despite at times struggling through different periods of an innings. That’s the nature of the sport that you come out against different opposition.”

Last ball of the penultimate over of the game, Williamson poked his bat out and picked up four to third man. He wanted a single to keep strike, because he was aware that the last over would be bowled by South Africa’s weak link on the day, Andile Phehlukwayo. “It was nice it rolled away for four, definitely,” he said later.

Mitchell Santner duly got Williamson back on strike second ball of the final over, and crack! Williamson swung Phehlukwayo to deep midwicket for the six that raised his first World Cup hundred. Scores levelled. Next ball, a steer for four to third man and Bob’s your uncle. Off went Williamson, back to his team-mates.

In his first World Cup back in 2011, Williamson was not a regular. He played four matches, batted all four times and made 99 runs at an average of 49.50, courtesy two unbeaten thirties. Four years later when New Zealand co-hosted the 2015 World Cup, Williamson was the team’s best batsman and captain-in-waiting. But he underwhelmed with the bat, scoring 234 runs in nine matches with one fifty (best of 57).

In 2019, he is leader of a side with genuine designs on winning the World Cup, but understated as always.

The closest comparison to Williamson the one-day batsman is Joe Root. But unlike Root, who can also at times look bogged down in ODIs, Williamson is not surrounded by big-hitters. Root bats after Jason Roy and Jonny Bairstow and before Eoin Morgan, Ben Stokes, Jos Buttler and Moeen Ali. Williamson’s lower middle-order team-mates include Neesham, increasingly known more for his witty tweets than ability with the bat, and de Grandhomme, who usually approaches his batting the way a race-car driver burns rubber on an F1 track corner.

He isn’t one for ranking his innings, but Williamson can bask in having played a truly excellent one-day hundred. One that, much like Stephen Fleming’s crowning ODI glory against South Africa in the 2003 World Cup, was fashioned out of exceptional judgement of the conditions and situation.

Truly, this innings showcased everything that is beautiful about Williamson the batsman. 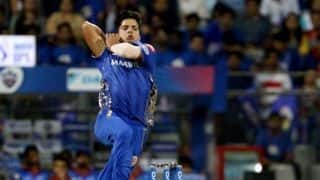