A look at cricketers who were killed during the World War I.

After war broke out in the summer of 1914, the county season was called off early and international tours cancelled as the call came for cricketers, along with the rest of their generation, to join up; hundreds did so, from all corners of the Commonwealth, and many of them never returned. As the centenary of the war is commemorated, Michael Jones remembers the cricketers who were killed in action.

1. Cecil Abercrombie: He scored 100 and took three for 27 for the Navy against the Army in 1912 — a performance which brought him to the attention of Hampshire, for whom he played the following season; he made three further centuries for the county, with a highest of 165 against Essex. He was killed in the Battle of Jutland on May 31, 1916, aged 30.

2. Charlie Adamson: He was a regular opening batsman for Durham in the first few years of the Minor Counties Championship, and played one First-Class match for Queensland in 1899. He was killed in Salonika on September 17, 1918, aged 43.

3. Harry Alexander: He was better known as a rugby union player who appeared in seven international matches for England, but also had some success as a batsman while at Uppingham School. He was killed at Hulluch on the Western Front on October 17, 1915, aged 36.

4. George Alpen: He was a regular player in Belgium in the years leading up to the war, appearing three times for the national team against the Netherlands in 1910 and 1911. He was reported killed in battle in 1916, but no details were known.

5. Alban Arnold: He played 22 First-Class matches for Hampshire from 1912 to 1914, scoring seven fifties and occasionally keeping wicket. He was killed at Ovilliers La Boiselle on July 7, 1916, aged 23.

6. Harold Bache: He impressed enough with some big scores in club matches in Cambridge to be picked for Worcestershire a handful of times between 1907 and 1910, but enjoyed limited success at First-Class level. He was killed at Ypres on February 15, 1916, aged 26.

7. Francis Bacon: He was born in Colombo, played irregularly for Hampshire from 1895 to 1911 — making one century against Leicestershire in 1907 — and later served as the county’s scorer. He drowned when his ship was sunk by a mine off the coast of Belgium on October 31, 1915, aged 46.

10. Percy Banks: He made his First-Class debut for Somerset in 1903, and played five more matches for the county five years later, with little success. He was killed near Ypres on April 28, 1915, aged 29.

11. Samuel Bates: He was introduced to cricket at the earliest possible opportunity: he was born at Edgbaston, where his father was groundsman. He was a useful left arm spinner who played a few matches for Warwickshire, and was on the Lord’s groundstaff. He was killed near Hardecourt on August 28, 1916, aged 26.

12. Gordon Belcher: He was a useful allrounder at Minor County level, scoring two centuries for Berkshire, but made a pair and only bowled one over in his solitary First-Class match for Hampshire against Warwickshire in 1905. He was killed near Richebourg, Belgium, on 16th May 1915, aged 29.

13. William Benton: He was a regular for Mote Park CC in Maidstone, and played two matches for Middlesex in 1913, with a score of 19 not out against Hampshire which was worth many more: it was more than any opposition batsman made in either innings, as Middlesex bowled their opponents out for 51 and 79. He died of wounds in France on August 17, 1916, aged 43.

15. Wilfred Bird: He kept wicket for Oxford University, Middlesex and Marylebone Cricket Club (MCC) between 1904 and 1913, as well as appearing for the Players against the Gentlemen, in which fixture in 1909 he took two catches and two stumpings. He was killed at Richebourg on April 9, 1915, aged 31.

16. Gervase Birkbeck: He played regularly for Norfolk in the Minor Counties Championship, scoring three centuries. He was killed in Palestine on April 19, 1917, a day before his 31st birthday.

17. Colin Blythe: He was unquestionably the greatest cricketer to be killed in the war. Bowling slow left-arm orthodox for Kent and England, he took 2,503 First-Class wickets at an average of under 17, including 10 or more wickets in a match no fewer than 71 times. His zenith came at Northampton in 1907; after Kent had reached 212 for four on the first day, the second was rained off — and with the pitch uncovered, conditions were ripe for Blythe to wreak havoc on the third. After the visitors’ last six wickets went down for 42, Blythe got the ball in his hands; he soon reduced Northamptonshire to four for seven, eventually taking all 10 for 30 as the home team were all out for 60. Nor was he finished: when Northamptonshire followed on, he picked up a further seven for 18 as they subsided to 39 all out and a massive defeat.

His match figures of 17 for 48 was a First-Class record at the time, and only Jim Laker has bettered them since; Blythe’s feat of taking 17 in a day remains unparalleled. On another occasion, he took 16 wickets in a match, and 15 a further three times — including once in a Test, with eight for 59 and seven for 40 against South Africa at Headingley in 1907. He finished with exactly 100 wickets in Tests at an average of less than 19, an outstanding record even by the standards of a generally low-scoring era. He was killed at Passchendaele on November 8, 1917, aged 38.

18. Major Booth: He was an example of the Victorian practice of attempting to give a child a head start in life by bestowing a title on him as a forename; he never reached the rank his name implied. He played in the last two Tests before the war, in South Africa in February 1914, taking four for 49 in the second innings at Port Elizabeth to help England on their way to a 10 wicket victory. Primarily a bowler, he took 603 wickets in a six year career, including eight in an innings four times, and took two hat tricks. In August 1914, just days before the county season was terminated as pressure grew on the players to enlist for service, Booth and Alonzo Drake bowled unchanged throughout two consecutive matches; Booth took 17 wickets in the four innings to Drake’s 23, although he went wicketless in the second innings against Somerset as Drake took all ten. His contributions with the bat were inconsistent, but occasionally spectacular: against Worcestershire in 1911 he scored 210 in four hours, and in 1913 he achieved the double of 1,000 runs and 100 wickets. He was killed on July 1, 1916, the first day of the Battle of the Somme, aged 29.

19. William Boswell: He was an all-rounder who played 14 First-Class matches for Oxford University, with one century against Hampshire in 1913 and a best bowling analysis of four for 22 against HDG Leveson Gower’s XI the same year. He died of wounds at Thiepval on July 28, 1916, aged 24.

20. Evelyn Bradford: He played occasionally for Hampshire between 1895 and 1905. He took six for 28 and five for 40 to bowl the county to an innings victory over Essex in 1896, but became the centre of controversy in the match against the touring Australians three years later when both umpires called him for throwing. His only First-Class century came against Leicestershire later that season, in which match he was no-balled again. In minor matches he made scores of 251 and 248. He was killed on the Western Front on September 14, 1914, aged 45.

21. William Burns: He started his career with Worcestershire as a specialist batsman, but took up bowling in later years with some success. The highest of his twelve First-Class centuries was 196 against Warwickshire in 1909, when he and Ted Arnold added 393 — a First-Class record for the fifth wicket at the time, and still the second highest in the County Championship. Against Gloucestershire in 1913 he scored 102 not out then dismissed Alfred Dipper, John Nason and Charles Barnett with consecutive balls, thus becoming one of the select few players to have made a century and taken a hat trick in the same First-Class match. He was killed at Contalmaison on July 7, 1916, aged 32.

22. Arthur Byng: He  played five First-Class matches for Jamaica in 1896-97, then had a break of eight years before reappearing for Hampshire. He achieved little of note for either team, but was more successful in club cricket, with a double century to his name. He was killed at Vailly on September 14, 1914, aged 41.

23. Norman Callaway: He holds the distinction of the highest First-Class batting average of all time. He made his debut for New South Wales (NSW) against Queensland at Sydney in February 1915, coming to the wicket with his team teetering at 17 for three in reply to the visitors’ 137. At the fall of the fourth wicket on 58 he was joined by his captain, Charles Macartney. Callaway started to hit out; he was dropped by John McAndrew on 41, but brought up his fifty soon afterwards and kept going. His second fifty took only 27 minutes, and he reached 100 with a straight drive to the boundary; he finished the day on 125 not out, with NSW already 91 ahead on first innings.

On the second morning he began to take more risks, and was dropped four times on his way to 200. Macartney was out before lunch for 103 to end a partnership of 256 in only 155 minutes; Callaway followed shortly after the break, an edge deflecting off the keeper’s gloves to be held at first slip. He had made 207 in his maiden First-Class innings, outshining his captain in the process — no mean feat given Macartney’s own reputation for fast scoring. He didn’t get a second knock in the match, as NSW won by a massive margin — and didn’t play again, leaving him with a career average of 207.00. He was reported missing on the first day of the Second Battle of Bullecourt on May 3, 1917, aged 21; it was later confirmed that he had been killed the same day. 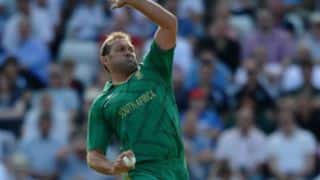 Jacques Kallis is forced to retire from international cricket because of serious back problem, feels his mentor