Let's look at cricketers who were killed during World War I. This is third part of the series.

As the centenary of the World War I is commemorated, Michael Jones remembers the cricketers who were killed in action. This is part 3 of the article.

46. Ralph Hemingway: He batted in the top order for Nottinghamshire in 1904 and 1905. He made six fifties, with a highest score of 85 against the South African touring team in which he added 165 for the first wicket with George Gunn. His last two first-class matches suggested an uncertainty as to his regional allegiance: he played for the North against the South, but the following week represented the Gentlemen of the South against the Players of the South. He was killed near Vermelles on 15th October 1915, aged 37.

47. Rupert Hickmott: He played occasionally for Canterbury in the Plunket Shield for five seasons, and was part of the New Zealand touring team to Australia in 1913-14. A score of 109 against Hawke’s Bay in 1914-15 was more than the opposition managed in either innings; it remained his only first-class century, with four other fifties. He was an occasional bowler, but did take two for 7 and four for 5 against Otago in 1914-15, in another innings victory; Wisden called him “probably the most promising young cricketer in the Dominion”. He was killed in the Battle of the Somme on 16th September 1916, aged 32.

48. Harold Hippisley:  Hippisley played seven matches for Somerset over a span of five seasons, with little success; his highest score was a modest 40* and he didn’t bowl. He was killed at Langemarck on 23rd October 1914, aged 24.

49. William Holbech: He appeared in three first-class matches for Marylebone Cricket Club (MCC) and Warwickshire, without achieving anything of note. He was invalided home from France and died of his wounds on 1st November 1914, aged 32.

50. Bernard Holloway: Holloway was an opening batsman for Sussex and MCC; he was part of the latter’s touring party to West Indies in 1910-11, when he made 100 against British Guiana at Georgetown, the only century of his career; he and Tom Whittington put on an opening stand of 230. Although he went to Cambridge, he never made it into the cricket team – but did play for the university at rugby. He was killed at Loos on 27th September 1915, aged 27.

51. Gilbert Howe: He kept wicket in five matches for Wellington in 1913-14, standing up to a young Clarrie Grimmett before his move to Australia. He took five catches and four stumpings. He was killed at Messines on 10th January 1917, aged 25.

52. John Howell: Scored heavily for Repton School over four seasons, moving Wisden to write that “Among all the young cricketers who have fallen in the War not one of brighter promise can be named… it is not too much to say that he was potentially an England batsman”. He played for Surrey 2nd XI against Staffordshire, testing himself against no lesser an opponent than Sydney Barnes – and succeeded, with his 44 the highest innings on either side in a low-scoring match in which Barnes and George Deyes ripped through the rest of the Surrey line-up. He did not get a chance to make his first team debut before war broke out, and was killed in Flanders on 25th September 1915, aged just 20.

53. Henry Hunt: Made his debut for Middlesex against Somerset in 1902, and coming on second change, dismissed John Daniell with his first ball in first-class cricket; he then scored 60 in the second innings, but could not prevent Somerset winning by one wicket. He played infrequently, with only 46 appearances over ten years, but achieved some success as a lower middle order batsman and right arm fast bowler. For the Gentlemen against the Players in 1904 he scored 128 – one of three centuries in the innings, which helped the Gentlemen to an innings victory despite Tom Hayward scoring 203 for the professionals. Hauls of five for 60 against Somerset in 1903, and five for 93 against Sussex in 1906, were the only occasions in his career he took five wickets in an innings; both helped his team to victory, and in 1903 Middlesex won the County Championship. His obituary stated that “Details with regard to his death have never been published… but his friends have long given up hope that he is still alive”; it was later confirmed that he had been killed at Ginchy on 16th September 1916, aged 41.

54. Kenneth Hutchings: He played in all five Tests of MCC’s 1907-08 tour of Australia, and two more in the home series of 1909. In the New Year Test at Melbourne – his second – he hit 126, including a six and 21 fours, adding 99 with the debutant Jack Hobbs and a further 108 with Len Braund. It proved crucial: England’s last pair of Sydney Barnes and Arthur Fielder came together in the four innings with 39 still needed to win, but managed to level the scores before attempting a seemingly suicidal single. If Gerry Hazlitt’s throw from close range had hit, the batsman would have short of the crease, but his miss enabled England to scramble home by one wicket, and Test cricket’s first tie was postponed by half a century. It remained his only Test hundred, but after making 59 at the Oval in the last match of the 1909 series he could consider himself unlucky not to have been selected again. In first-class cricket he scored more than 10,000 runs, including 22 centuries; his peak year was 1906, when he scored 1,454 runs at an average of 60, with four hundreds, and played a major role in Kent winning the County Championship title that year. He was famed as a hard hitter: in the same year George Hirst, who usually fielded as close in as possible at mid-off, went back several yards when Hutchings was on strike to avoid the full force of his blows. He also passed 1,000 runs in 1909 and 1910 – in both of which years Kent won the Championship again – after falling just short in the years in between. By 1912, though, he had lost form and was dropped by the county. He was killed in Ginchy on 3rd September 1916, aged 33.

55. Arthur Isaac: Played for Worcestershire in the first few years of the Minor Counties Championship, then after the county had been promoted to first-class status, in the main Championship. Although he played 52 matches over 14 years, his record was modest, with only three fifties. He later served on the club committee, for part of the time as treasurer. He was killed at Contalmaison on 7th July 1916, aged 42.

56. John Isaac: He was the brother of Arthur Isaac, had a briefer first-class career, appearing for Orange Free State in the Currie Cup in 1906-07 while stationed in South Africa, then for Worcestershire in the following county season – although he enjoyed little success with either team. He did rather better as a jockey, riding the winner of the Cairo Grand National in 1911. He was killed at Fromelles on 9th May 1915, aged 35.

57. Burnet James: He was a long-serving captain of Bristol Imperial CC at minor level, but found little success in his brief first-class career, scoring only 27 runs in three matches for Gloucestershire in 1914; he also played for the county at hockey. He was killed at Langemark on 26th September 1915, aged 28.

58. Arthur Jaques: A bowler who took 112 wickets for Hampshire in 1914 at an average of under 19. He was an early exponent of ‘leg theory’: consistently targeting a line on or just outside leg stump, tying the batsmen down until, in frustration, they gave catches to the packed onside field. That season he took eight for 67 and six for 38 against Derbyshire, six for 33 and eight for 21 against Somerset, three for 75 and seven for 51 against Warwickshire. He was part of the MCC touring team to West Indies in 1912-13, although he met with little success in the eight matches he played on the tour. He was killed at Loos on 27th September 1915, aged 27.

59. Percy Jeeves: He had been talked of as a potential England player, but like many others of his generation, never got the chance. He was born in Yorkshire, but failed to impress his native county at trials in 1910 and moved to Warwickshire instead, for whom he played against the Australian and South African touring teams in 1912 before qualifying to represent the county in Championship matches. As a fast-medium bowler, he took 106 wickets for the county in 1913 at an average of under 21, while making occasional useful contributions with the bat; he continued to impress the following season, with a further 90 wickets. His best performance was three for 80 and seven for 34 against Worcestershire in 1913, skittling the neighbouring county for 74 in the second innings. He was killed in the Battle of the Somme on 22nd July 1916, aged 28 – but he lives on in fiction, afterthe cricket fan P.G. Wodehousesaw Jeeves’s name on the scorecard of a club matchand chose itto bestow upon Bertie Wooster’s valet.

60. David Jennings: He was on the fringes of the Kent team for several years, unable to secure a regular place at a time when the county had a surfeit of batsmen. In 35 matches he scored three first-class centuries, with a highest of 106 against Essex in 1914. He was invalided home from the Western Front and died of his injuries on 6th August 1918, aged 29.

61. Robert Jesson: Bowled legspin for Hampshire, taking five for 42 on his first-class debut against Warwickshire in 1907; those remained his best figures in a 15 match career. He was killed in Mesopotamia on 22nd February 1917, aged 30.

63. Arthur Lang: Lang was a wicketkeeper-batsman for Cambridge University and Sussex. The county’s strength in the spin department in the pre-war years – with George Cox, Albert Relf and VallanceJupp operating together – enabled Lang to maintain the unusual record of an almost equal number of catches and stumpings, with 17 and 16 respectively from his 22 first-class matches. He also made two centuries, with a highest score of 141 to help his county chase down a fourth innings target against Sussex in 1913. He went missing in action at Cuinchy on 25th January 1915, and it was later confirmed that he had been killed that day, aged 24.

64. Lawrence Le Fleming: Played 12 first-class matches for Kent and one for the Army, but with little success, achieving a highest score of only 40. He was killed at Maissemy on 21st March 1918, aged 38.

Read Part 1 of this Article

Read Part 2 of this Article 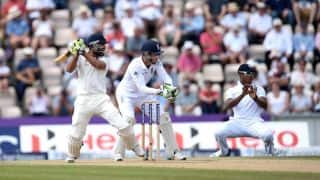 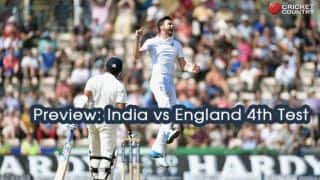