The Mahendra Singh Dhoni-Virender Sehwag rift may have been denied vehemently by the team management, but the divide between the two is very much an open secret. However, far from being unique, discords such as this have been commonplace in the history of the game. In this series by CricketCountry, Arunabha Sengupta looks at some of the most famous feuds of cricket. 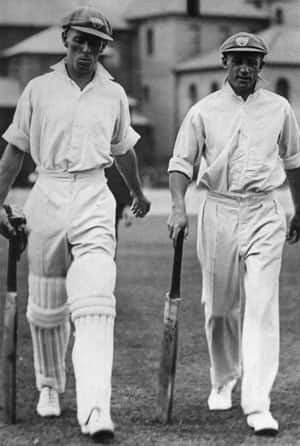 During a match at the SCG, Don Bradman (right) came to know that Jack Fingleton, who opened the batting, had had his bat sprinkled with holy water by a Catholic bishop. Fingleton was soon dismissed. As Bradman, at No 3, passed Fingleton on his way to the middle, he said to him: “We’ll see what a dry bat will do out there.” The master, of course, scored his usual century. The Bradman-Fingleton rivalry is most well documented © Getty Images

The Mahendra Singh Dhoni-Virender Sehwag rift may have been denied vehemently by the team management, but the divide between the two is very much an open secret. However, far from being unique, discords such as this have been commonplace in the history of the game. In this series by CricketCountry, Arunabha Sengupta looks at some of the most famous feuds of cricket.

When cricket addicts talk about rifts and chasms in teams due to diverse backgrounds, they tend to think of the vast length and breadth of India from where players come into the national team with various languages, cultural backgrounds, religions and food habits. They may also think of Pakistan — a country blessed with the unique ability to manufacture differences, factions and bitterness out of virtually nothing. Or of the West Indies, which after all, is not a single country — with each island carrying its own identity, lobby and baggage. In the present day, even Zimbabwe with its political problems and South Africawith remnants of a quota system may enter the discussion.

However, if one thinks of the mighty Australians, the prevailing picture is of the ideal team, the very definition of camaraderie, where one stands up for the mate. And hence, it may come as a huge surprise to learn that this great sporting nation once had the team slashed into two distinct halves, their one for all and all for one musket turned on each other. And if we add that the driving cause of this divide was religion, it may sound unbelievable. But that was how it was.

In the 1930s, when Australian cricket was riding the crest of the Don Bradman tidal wave, the issue of sectarianism had created a chasm within the great side. On one side were the Masons — including Bradman himself, Bill Ponsford, Bert Oldfield and others. On the other hand were the Catholics, including Jack Fingleton, Bill O’Reilly, Stan McCabe, Leo O’Brien and Chuck Fleetwood-Smith.

According to Greg Gowden, the biographer of Fingleton, it is not coincidental of the most bitter feuds among the Australians of this generation existed between Bradman and members of the Catholic group.

In fact, a small but blistering anecdote underlines the truth of this proclamation.

During a match at the Sydney Cricket Ground (SCG), Bradman came to know that Fingleton, who opened the batting, had had his bat sprinkled with holy water by a Catholic bishop. Such superstitions too, as one can see from history, are not restricted to the subcontinent.

Fingleton was soon dismissed. As Bradman, at No 3, passed Fingleton on his way to the middle, he said to him: “We’ll see what a dry bat will do out there.” The master, of course, scored his usual century.

Compounding the religious divide, was the other major issue that most of his teammates felt that Bradman thrived on the popularity and that made the game more of a one man show, was aloof towards the other team members and often became greater than the game itself.

One of the most interesting comments about Bradman was made by O’Brien just before his death in 1997: “He had an inferiority complex, except when he had a bat in his hand.”

It happens that another of Bradman’s teammates, a 1948 Invincible, privately expressed the same view — “It was the small-man syndrome that drove him to excel.”

Bradman and Fingleton added a world record 346 for the sixth wicket in the Ashes Test match at Melbourne in 1937, but that did not really indicate that they were the gelled well off the wicket.

Fingleton’s rift with Bradman is one of the most long-lasting conflicts in the history of the game, and it kept them far from speaking terms right up to the former’s death in 1981.

Fingleton, a decent opening batsman, bore Bradman quite a few grudges, including the belief that it was The Don who kept him out of the Test side during the 1934 tour of England. Biographer Gowden discovered an extraordinary letter that Fingleton wrote to Bill Woodfull, the Australian captain and selector, complaining about his omission, noting that certain Australian players “probably don’t want me as a teammate”.

The biggest issue between the two was the infamous Adelaide leak during the Bodyline series.

Australian captain, Bill Woodfull, had been struck over the heart by an express Harold Larwood delivery during the Adelaide Test of the notorious series. Later in the afternoon, while Ponsford and Vic Richardson were at the crease, English team managers Plum Warner and Richard Palairet paid Woodfull a visit in the Australian dressing room to express their concern over his injury.

Still under considerable pain, and aghast at the English attitude of making a mockery of his very idealistic views of sporting spirit, Woodfull was not too eager to entertain the officials. From the massage table, he said the words that have become immortal with time, and was paraphrased to some extent 75 years later during another infamous Test at Sydney by Anil Kumble.

“There are two teams out there. One is trying to play cricket. The other is making no attempt to do so.”

For an Englishman hailing from the early days of the century, this allegation of not playing cricket was crushing, and there are reports that Warner was in tears when he returned to his hotel.

The damage, however, became irreversible, when this incident — including the quote — was leaked to the press, kick-starting the Bodyline controversy, soon becoming the biggest crisis cricket has ever faced.

Fingleton, who had a day job reporting for a Sydney newspaper, was the prime suspect. Warner went as far as to say that the story had been leaked because one of the Australian players in the dressing room was a journalist.

Fingleton, thus, got the blame but believed that Bradman was the culprit and should have owned up. According to Gowden, this “fatally poisoned” their relationship.

In 1947, in his acclaimed Cricket Crisis, Fingleton alleged that it had actually been Bradman who had leaked the news to Claude Corbett of The Sun. By then, Fingleton had retired from cricket, but Bradman was in his last couple of seasons, gearing for a glorious swansong.

Of course, Bradman rubbished the claim and blamed Fingleton for the leak, and the two hardly ever spoke again. Fingleton did author another book based on Bradman’s final tour of Australia with the Invincibles, Brightly Fades the Don. While second to none in his admiration of Bradman’s batsmanship in the book, it did not patch things up between the two because in many parts, Fingleton was severely critical of the personality of the greatest batsman who ever lived. 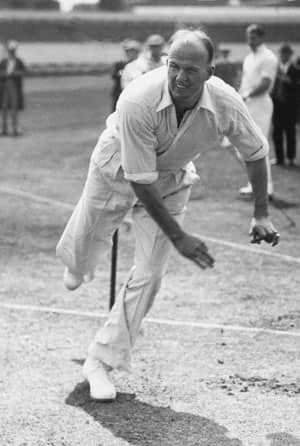 Jack Fingleton and Bill O’Reilly (above), the two anti-Bradman Australian cricketers, were together in the Press Box when Don Bradman was bowled off the second ball by Eric Hollies in his final Test innings and have been reported to have become hysterical with laughter © Getty Images

In 1995, after O’Reilly and Fingleton had both passed away, Bradman wrote: “With these fellows out of the way, the loyalty of my 1948 side was a big joy and made a big contribution to the outstanding success of that tour”.

It is strange that Bradman should prefer not having on his team the bowler whom he often referred to as the best he had ever seen. However, the Irish Catholic background and easy beer dipped social ways of the champion leg spinner did not quite agree with the abstemious Protestant grounding of the great batsman. It is hard to believe, but Bradman’s vindictiveness prematurely ended the career of the “Tiger”.

In fact, O’Reilly summed up his feelings when he complained to a board member, “You have to play under a Protestant to know what it’s like”.

O’Reilly followed Fingleton’s footsteps to become a journalist, and kept following them further while criticising the great man relentlessly. Funnily, the two anti-Bradman friends were in the Press Box together when the master was bowled off the second ball by Eric Hollies in his final Test innings, and they have been reported to have become hysterical with laughter.

Nevertheless, O’Reilly claimed that he was silent about his deepest feelings about Bradman. “You don’t piss on statues,” as he put it.

However, Bradman’s genius with the bat shone through even through the most unpalatable bitterness. O’Reilly did go on to say that compared with Bradman, batsmen like Greg Chappell and Allan Border were mere “child’s play”.

Non-performing Indian players likely to be dropped for Asia Cup