Cyril Ritchard, born December 1, 1898, was a famed Australian stage, screen and television actor and director. Arunabha Sengupta recalls the time when he added some cricketing elements to a song during the Bodyline controversy.

Cyril Ritchard is probably best remembered today for his performance as Captain Hook in the Mary Martin musical production of Peter Pan, 1954.

Before that, in 1945, he portrayed Gabriele Eisenstein in Gay Rosalinda at the Palace theatre in London. It was a version of Strauss’s Die Fledermaus by Erich Wolfgang Korngold and Ritchard appeared on stage with Peter Graves. The show ran for almost a year.

After Peter Pan, his career shot up through the showbiz charts.

Born in Surry Hills, Sydney, Australia, Ritchard started out in musical comedies in 1918. And by 1929, he had also made an appearance as a villainous figure in Alfred

When the Bodyline controversy shook Australia in 1932-33, along with the foundations of the Empire and diplomacy, Ritchard was busy with Our Miss Gibbs at His Majesty s Theatre, Sydney.

It was an Edwardian musical comedy in two acts by Cryptos and James T. Tanner, about a young Yorkshire girl who finds a job in Garrods The lyrics were by Adrian Ross and Percy Greenbank, the music by Ivan Caryll and Lionel Monckton. First produced by George Edwardes, it had opened at the Gaiety Theatre in London on January 23, 1909 and had run for an extremely successful 636 performances.

The show was still popular 24 years later, and Ritchard was working on it in Sydney.

The uproar caused by fast bowling hurled at the bodies of the Australian batsmen by the likes of Harold Larwood and Bill Voce, with a crowd of close in fielders in the leg trap, prompted him to add a few lines to a song in the musical.

Now this new kind of cricket takes courage to stick it.

There s bruising and fractures galore,

After kissing their wives and insuring their lives

Batsmen fearfully walk out to score.

With a prayer and a curse, they prepare for the hearse

Undertakers look on with broad grins.

Oh, they d be a lot calmer in Ned Kelly s armour,

When Larwood the wrecker begins.

It does reflect exactly what the Australian public thought of Douglas Jardine s tactics that won the Ashes and placed the two countries on the brink of a diplomatic situation.

When sporting events influence popular culture one can be sure that either there is something special going on or something very, very wrong. One need not debate which one it was for Bodyline.

Perhaps if these modified lyrics had been sent as part of the Bodyline Cables to MCC, a lot of the controversies could have been avoided.

Ritchard enjoyed a long and successful career on stage and screen. His days under the arc lights numbered almost six long decades. He passed away in Chicago in 1977. His funeral mass was celebrated by Archbishop Fulton Sheen. 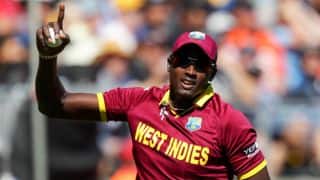 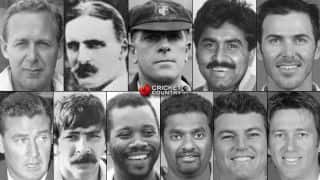