He runs in fast, fires an away-swinger to a right-handed batsman and beats the outside edge.

Ruthless, fearful and spirited, Dale Steyn is South Africa s most swaggering and flamboyant fast bowler. He runs in fast, fires an away-swinger to a right-handed batsman and beats the outside edge. This sight has become his stylemark. (Ask Rohit Sharma, and he shall briefly explain.) Steyn, as a matter of fact, bowls an absolute peach of an outswinger; he cuts the ball through the air and beats the batsman all ends up. Popularly known as Steyn Gun or Steyn Remover, he can bowl in the same channel with same pace and vigour, time and again. On his birthday, let s walk through 10 intriguing facts and figures of South Africa s best fast bowler: READ MORE: 10 sensational Dale Steyn deliveries that makes the jaw drop

1. Did not make ODI debut donning Proteas jersey: Steyn made his ODI debut for Africa XI, not South Africa. Surprising as it sounds, he managed to take only 2 wickets in a 3-match series between Asia XI and Africa XI. Nonetheless, he donned Proteas jersey 4 month later against Australia.

2 Announced his arrival with a spectacular bowled: In his debut match, Steyn dismantled England s Marcus Trescothicks s defence with a fierce in-swinging delivery. However, he failed to put up a stellar performance in the series, eventually being dropped from the side.

3. Fastest player to reach 400 Test wickets: Though Steyn became the second fastest to reach 350 wickets behind Muttiah Muralitharan, he took much lesser time to take the next 50 scalps. For a bowler, who consistently clocks 145 km/h, this record is indeed sensational. READ MORE: Kevin Pietersen: 11 shots that define his incredible batting genius

4. Best bowling strike-rate of all time in Test: Steyn s strike-rate reads 41.7, which is the best among bowlers who have delivered over 10,000 balls.

5. Only pacer to take five-for against all Test-playing nations: For a bowler with such class and pedigree, this fact doesn t come as a surprise, does it?

7. Knack of bagging awards: The season 2007-08 is marked as Steyn s most successful phase, pocketing 78 wickets at a staggering average of 16.24, which eventually earned him ICC 2008 Test Cricketer of the Year Award. While he was named Wisden Cricket of the Year in 2013, he added one more to his trophy cabinet in the following year by bagging Wisden Cricketer s Almanack.

8. Got a break in Hollywood: Yes, you read it right. The stylish cricketer acted in a movie named Blended, boasting of a cameo of himself. 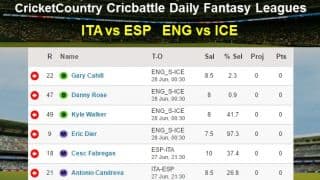