Dale Steyn was in rip-roaring form against Australia at Port Elizabeth.

Pace, hostility, intelligence, agility. Name it, and he has got them all. Karthik Parimal explains why Dale Steyn is already one of the greats of the game.

Bowlers, unlike batsmen, can seldom keep a viewer transfixed. One wouldn’t mind waiting a few minutes to refill a mug of coffee from the kitchen counter only a few yards away when a batsman, pleasing to watch or otherwise, is wielding the willow to produce a flurry of runs. As long as the ball keeps flying off the blade, propped by the commentators trying in vain to curb their amusement behind the microphone, we remain glued to our seats. Nevertheless, each era has also boasted of at least one gifted bowler who has almost usurped the domain generally reserved for batsmen — Shane Warne springs readily to mind.

Since the advent of the third and shortest recognised format, however, it’s the batsmen, again, who can brag of raking in the eyeballs. Yet, Dale Steyn, the fiery speedster, stands out amidst the rubble in one of the lesser popular facets of the game. In what many purists believe is the dwindling phase of quality bowling, Steyn ranks amongst the best of the pacers to grace the sport. He can keep you hooked and in awe of his brilliance, while a sense of pity for the batsman at the receiving end unknowingly engulfs you at times. You don’t want him to refrain from operating at full throttle, though. You yearn for him to continually meet the batsman’s nervous smile — one that follows after a ball duly whistles past the ear — with a deadpan, yet menacing, stare.

Prodigiously swinging the red leather both ways, as was dexterously demonstrated during South Africa’s 231-run win over Australia at Port Elizabeth last week, Steyn is certainly on his way into the realm of greats. It’s not often that one of the grittiest, finest batsmen admits to having a problem with a fast bowler, that in the first few pages of his autobiography. “[Steyn] wanted to hit you and hurt you and get you out, preferably in that order. He didn’t say much, but you felt that he just detested you and your Australian helmet,” states Michael Hussey in his book Underneath the Southern Cross. That impact has only intensified during recent times.

How good is Steyn?

If cricket featured an equivalent of FIFA’s Ballon d’Or award (which is given annually to the most exceptional player based on votes by journalists, and coaches and captains of international teams), Steyn would be in contention, if not bag it, every year. Cristiano Ronaldo was the recipient of the aforesaid award this year, and like Sir Alex Ferguson once said of Ronaldo, “even if he was having a dire game, he would always create three chances. Every game. Look at all the matches. In the mountain of video evidence, you could not find one instance where he failed to create at least three chances. He possessed an unbelievable talent.”

It’s a trait embedded in most champions. Even on their off days, they’re a cut above the rest. Steyn, too, has blown cold at times, but invariably ends up creating a few chances for his side. His spell against India at Johannesburg in the December of 2013, where he delivered 56 overs in unyielding conditions for just a wicket, can be a case in point. While he came close to dismissing a few watchful Indian batsmen, the pressure exerted reaped dividends at the other end. Vernon Philander, Morne Morkel and Jacques Kallis were eventually amongst wickets. The same can be said of his first innings’ figures against Australia during the recently concluded second Test.

This characteristic sets him apart from his contemporaries — ones who are futilely pitted against him for the top slot. When James Anderson, Stuart Broad and Morne Morkel are having an insipid outing, their shoulders provide ample evidence of that fact, which is seldom the case with Steyn.

Can Steyn be mentioned in the same breath as the greats of the last two decades?

In the present era, it’s safe to say that Steyn towers over the rest, although a few members of the fraternity opine otherwise. Statistics, however, do not provide credence to their theory. It’s also true that, like the great fast-bowlers of the recent decade, Steyn has the guile, temperament and mental-toughness to finish as one of the best. His hostility — a prerequisite to being an outstanding pacer — is well-chronicled, too, and at 30, if injuries are kept at bay, he has a good five to six years ahead of him. Where the other tearaway stalwarts, like Wasim Akram, Waqar Younis, Allan Donald and Curtly Ambrose, stood at the same juncture in their respective careers will make for an interesting read.

Champion fast bowlers at thirty years of age in Tests:

Steyn’s average, as depicted in the table above, is certainly in the same range as his legendary predecessors, and the strike-rate is a notch above. While he’s only 13 wickets away from overtaking Waqar’s overall tally (373 wickets), he’s on course to surpass Ambrose (405) and Akram (414) too. Ambrose, Donald and Akram all played until they were almost 36, and it’s noteworthy that their average either improved or remained more or less the same for the last six years of their careers. If his body is willing, there’s no reason why Steyn cannot feature, or even top, that list.

In what is predominantly perceived as a batsman’s game, Steyn has swooped in and challenged the notion like few. Like Michael Holding, perhaps the most apt of judges of this rare art, once said, Steyn is the only fast bowler in the world playing Test match cricket right now. “And when I say fast bowlers, I am not talking about people who bowl 80 miles an hour. Those are not fast bowlers.” Let’s celebrate him while he lasts, before he enters the annals of cricket as a former, albeit one of the greats of the game. 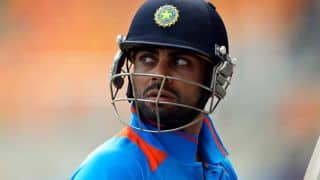 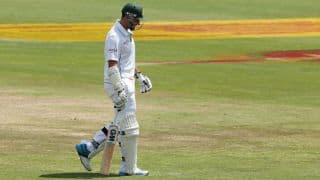