Damien Fleming, born April 24, 1970, was one of Australia’s finest swing bowlers, who never fully realised his potential owing to frequent injuries and other world-class bowlers in the side. He had his moments, taking a hat-trick in his first Test before guiding his side to the finals in the 1996 and 1999 World Cups. Karthik Parimal looks back at the seamer’s punctuated career. 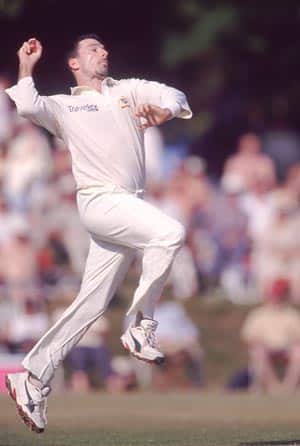 If had there not been frequent interruptions, Damien Fleming could have been one of Australia’s finest © Getty images

Damien Fleming, born April 24, 1970, was one of Australia’s finest swing bowlers, who never fully realised his potential owing to frequent injuries and other world-class bowlers in the side. He had his moments, taking a hat-trick in his first Test before guiding his side to the finals in the 1996 and 1999 World Cups. Karthik Parimal looks back at the seamer’s punctuated career.

During Australia’s period of ascendancy, many first-rate cricketers — who could have easily featured in the starting eleven of most line-ups —were made to wait on the sidelines. It gave a glimpse of the extraordinary standards set. It was one of the reasons that Damien Fleming, described by many an expert as one of the finest swing bowlers to grace the international stage, played far fewer games than what his potential suggested at the outset. The other nemesis that hindered his progress was the injuries. Had those avoided visiting him that often, there is little doubt that Fleming could have been one of Australia’s finest servants in the fast bowling department of the modern era.

Steve Waugh considered him one of the best exponents of the art of swing bowling alongside Terry Alderman. “Flem has shoes the size of Ronald McDonald, a warped sense of musical taster that extends from heavy metal and grunge to his ultimate idols, Kiss, a wise-cracking sense of humour, and a gift for producing wicket-taking deliveries. Besides Shane [Warne], he was the guy in our team most likely to conjure up an unplayable delivery when least expected. Injuries and, to a lesser extent, an oscillating temperament prevented Flem fulfilling his enormous potential,” writes Waugh in his autobiography Out of My Comfort Zone.

An outstanding trait of his was to get the ball to curve away from the batsmen, stance notwithstanding, at the last moment. This weapon in his armoury exposed loopholes in the techniques of many a batsman. It was for this reason that the West Indies team of the late 1990s disliked facing him; they preferred Glenn McGrath’s nagging line to Fleming’s perplexing swingers. His style of bowling appeared tailor-made for seaming English wickets, but, surprisingly, he never played a single Test there. In a career that spanned over six years for just 20 Tests, many firsts were never realised.

Australia toured Pakistan in the September of 1994, and although the batting department was fairly established, a few bowlers were yet to make a mark. Young blood had been infused. Glenn McGrath’s outing at Karachi, during the first Test, can be termed decent, but he made way for a lean Fleming in the next at Rawalpindi. It was the latter’s first experience in whites, and it was one that he’d cherish forever. In a high-scoring game, which eventually ended in a turgid draw, Fleming became the first from his region to grab a Test hat-trick on debut, claiming the wickets of Aamer Malik, Inzamam-ul-Haq and Saleem Malik.

He was the third bowler to register a hat-trick on debut, the other two being England’s Maurice Allom in 1930 and New Zealand off-spinner Peter Petherick in 1976. For the next Test at Lahore, he was replaced by Craig McDermott, owing to an injury that forced him out of action. It was the first of a long list of obstacles that’d haunt him throughout the duration of his career.

Fleming was on the verge of another hat-trick, this time against India at Adelaide in the Australian summer of 1999-2000, but Shane Warne grassed a simple opportunity that prevented it from happening.

Like most lower-order batsmen, Fleming never underestimated his own abilities with the willow. This was evident during his unbeaten knock of 71 against England, his highest score in Tests, at Brisbane in 1998-99.

Although such scores were few and far between, he never refrained from swinging the bat, which on some occasions proved to be comic.

In the semi-finals of the 1996 and 1999 World Cups, it was Fleming who removed the possibility of elimination on both counts, helping Australia reach the finals by bowling the ultimate overs. In the 1999 edition, during which Lance Klusener and Allan Donald botched up a straightforward chance, Fleming was successful in completing the assigned task of saving nine runs from six balls. (In 1996, he rattled Courtney Walsh’s timber to extract a five-run win)

After donning the yellow jersey for 88 times in the overs-limit format, Fleming called it a day, with 134 wickets under his belt. In the Tests too, his record was noteworthy, for he had 75 scalps from 38 innings at an average of 25.89. There was no hullabaloo surrounding his retirement, but none could argue with the fact that had there not been frequent interruptions, he could have been one of Australia’s finest. In Wisden, Chris Ryan summarised Fleming’s career aptly when he wrote, “He has only just turned 33. He is younger than Glenn McGrath, steadier than Brett Lee, more potent than Andy Bichel. You wonder if the Australian public realise just what they have lost.”

Fleming, though, has stayed connected with the game, joining the Commonwealth Bank Cricket Academy coaching staff in 2003 and offering services as a bowling coach thereafter.