Dane Piedt finished with figures of 4 for 101 on Day 1 of the fourth Test against India.

Dane Piedt played a crucial role on Day 1 of the fourth Test against India, picking up four wickets out of the seven to fall. Piedt should have been included in the earlier matches ahead of Simon Harmer simply because he has the experience of bowling in Indian conditions and has performed well too. Piedt was part of the South Africa A team, which toured India for a couple of unofficial Tests. He picked up 11 wickets in those 2 matches, which included 2 five-wicket hauls. Although, South Africa A lost the series, Piedt was probably the brighter prospects among the bowlers. Full Cricket Scorecard: India vs South Africa 2015, 4th Test at Delhi

Piedt comes across as a much more daring bowler. He is not afraid to toss the ball up and not afraid of going for runs in pursuit of wickets. We never got to see Harmer toss the ball up as much, but he too was effective in the Nagpur Test to a certain extent and one can only hope that this tour was a huge learning curve for him. Harmer will hope that he gets an opportunity soon and can cement his place in the South African side. Full cricket updates: India vs South Africa 2015, 4th Test at Delhi

Selectors love to have a vast pool of bowlers from whom they can pick their team. The presence of Imran Tahir means the spin department is even stronger. Tahir has had a good series, picking up 12 wickets in  four matches so far. But the only thing that will go against him is his consistency. A lot was expected of him as he was in excellent form in the limited-overs fixtures. Tahir is an expert in getting the tailenders, but he has struggled to get rid of quality batsmen in Tests. With Harmer and now Piedt knocking on the doors, Tahir’s position as the team’s first choice spinner could be in jeopardy.

Piedt definitely deserves more chances in the near future. If you compare his overall First-Class statistics with Harmer, it is safe to say that Piedt has a much better record. Piedt in his 53 matches has 185 wickets at 29 with strike rate of just under 53. Harmer, on the other hand, has an impressive 252 scalps from 67 matches at 34 and picks up a wicket every 64 deliveries.

It will not be the worst of ideas to play both off-spinners in a match, if Tahir does not live up to the expectations. South Africa selectors have in the past backed many youngsters and have given them a long run despite their performance. Players like Rilee Rossouw, Kagiso Rabada, Stiaan Van Zyl among others come to mind. Piedt too must be given a longer rope based on whatever little we have seen at the international stage. 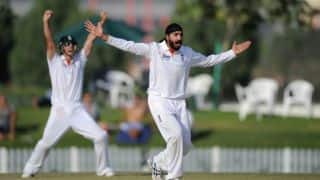