Quite a number of people have stated the timing of Mickey Arthur’s sacking, so close to the Ashes, is a mistake. News report have been stating, "Ashes crisis!" I disagree. The news that Arthur has been replaced by Darren Lehmann is fantastic. The bold decision by Cricket Australia was most needed. Quite a number of people have stated the timing of Mickey Arthur’s sacking, so close to the Ashes, is a mistake. News report have been stating, “Ashes crisis!” I disagree. The news that Arthur has been replaced by Darren Lehmann is fantastic. The bold decision by Cricket Australia was most needed.

The other news that Michael Clarke has stepped down in his selection position has only highlighted this strategic change at the top of the food chain. This is outstanding news.

What about England? To be honest, I reckon this decision will not be great news for their camp. The new coach is a man who had a taste for their blood and will be far more driven and obsessed to coach his troops to knock them over and out. Fortunately for Australian supporters, England did not lift the 2013 ICC Champions Trophy, losing to India in the final.

Arthur never seemed to secure the support from the public. I am left wondering if internally things just haven’t recovered since the Indian tour dramas — ‘homework-gate’ being the most dramatic episode It would seem that it definitely wasn’t working with Arthur and this change seems to have cleared the air, along with some good Ashes inclusions in the squad.

Arthur is not to be blamed completely for the way things turned out. In fact that would be unfair. But the fact is he wasn’t able to command respect. His regime-like decisions seemed like lessons from the school headmaster which just never settled well across the board. Australian Cricket has recently felt like a bit of a school yard — out of control. In his defence, it must be said that some of the Australian players carry larger-than-life egos. Arthur tried and it is a pity to see anyone get sacked professionally, but just the way it went and poor performances only added fuel to the fire.

A few unwanted incidents happened under the watch of Arthur. Australia lost 0-4 to India, especially the unwanted off-field dramas. Discipline had slipped amongst the players, and although according to Cricket Australia this is part of the coaching deal, the players are adults and should have been far more professional. Having said that there was no respect being shown towards certain departments and Arthur’s inability to establish a strong, sincere and genuine sense of respect would have contributed to this. The Champions Trophy early exit contributed to Arthur’s misery, along with the David Warner incident in the bar.

Cricket Australia CEO, James Sutherland, reflected this in the press conference during the official announcement of Lehmann’s selection: “Discipline, consistency of behaviour and accountability for performance are all key ingredients that need to improve. And we see that the head coach is ultimately responsible for that. The Cricket Australia Board decided yesterday that Mickey Arthur should not continue as head coach of the Australian cricket team. In taking this decision, the Board accepted the recommendation to make an immediate change as being in the best interests of the team.”

It may seem harsh, but it had to be done. Australia never seemed set on a non-Australian leading the side. There is possibly still a sense of belief that bringing in a personality from the glory days can turn things around, not that of a coach having not been involved with that era.

With Clarke no longer in a selection position, all the heated debate that he has his “favourites” can now be dusted away and this will enable him to focus further on leadership of his team and mentor his batsmen. This is a healthy step from both a personal and public stance. It could help with selection consistencies, but John Inverarity will be watched closely with this management.

It’s great news that Lehmann now has his chance and he’s had the chance to graft and show his leadership and tactical colours with the Queensland Bulls, who have shown solid improvement.

Two years ago, Shane Warne also shared his opinion that Darren Lehmann was the ideal man for the job, post-Tim Nielsen. Finally Warnie has had just another tip pay off! “I think Darren Lehmann is absolutely outstanding —as a coach or in some senior role involved in the team or as a selector. I think he’s got a really good understanding of the young guys, he’s got a great understanding of old school and what’s required to perform. [There’s] old-school ’70s and ’80s — sit down and don’t say a word and let the experienced people talk — to the new way where you play one game you think you’ve played a hundred and you’re part of the furniture. Somewhere in the middle is about the right way.”

Lehmann comes from the die-hard Aussie cricket days. His leadership experience, passion for the Baggy Green legacy and his “bloke” attitude will be really good our guys — supporters included. Lehmann will also be able to give these players a good kick in the back when needed and have the respect shown given they will know where he comes from and likely relate to him far easier than the unknown elements of Arthur.

Lehmann has an unquestionable passion for the great game. He has a “team comes first” attitude. His focus on the fundamentals is hard to go unnoticed and while we always hear about players waffling on about their fitness, hitting the gym, doing weights etc. Lehmann will be focusing on batting, bowling and fielding — the rest is simply detail. He also has been in the hot seat for telling it like it is and perhaps that brutal aspect of his personality will toughen these guys up and make them know “the line in the sand” [as Arthur put it] before he even shows up at the first training session.

Best of all was Lehman’s attitude towards family values — highlighted in his press statement. In a side where individualism seemed to take hold and accountability was never properly addressed, collectivity may return to the side which will inevitably create a brighter team culture. Winning will help and Lehmann is aware of this, but Cricket Australia needs to become a family again.

As per his statement: “It’s about life as well, it’s a game of cricket. It’s important we have success and play well but it’s a small part of your life, so we’ve got to make sure we are helping them grow their lives on and off the ground, that is really important to me. Family is a big part of it, enjoying each other’s company while we’re away, and learning about ourselves and different cultures and different people we have in the team.“

If you also need to know a thing or two about Lehmann as a cricketer, he could hold his own. He averaged 57.59 runs with the bat at First-Class level, averaged 44.95 runs for the Baggy Greens with five centuries from 27 Tests. He averaged below thirty with the ball at Test and One-Day International level, and he played a huge role in Australia’s World Cup wins in 1999 and 2003, notably 2003 where he scored 224 runs at 44.80 and bagged six wickets.

Essentially the business needs to be done on the field. However, coaching and leadership are vital for this unstable time in Australian Cricket. I am confident this will bring a sense of natural respect, given Lehmann’s background and the fact Cricket Australia will stress the importance to the team given their timing for such a move. Most of all, the players have been far from disciplined as a unit so they will have to do their part to ensure Lehmann is boosted in his capacity.

I also believe this move will possibly be a start to rectifying the leadership issues we have. Michael Clarke is unlikely to play cricket for a great deal longer — stated by him for personal aspirations and his physical issues. And right now there is a leadership void. Coaching was directly related to his and this could seriously help fix this problem, or at least get things back on the rails.

The Ashes is just around the corner. England did not win the Champions Trophy, which is good news for Australia. Australia have a bunch of players who have stepped up for Australia A in recent tour matches, and a few others edging to have a crack against the English team — especially Chris Rogers and Ed Cowan.

Australian Cricket has sunk to an all-time low. Lehmann cannot fix things on his own. Tough decisions need to be made. There is  hard work ahead. 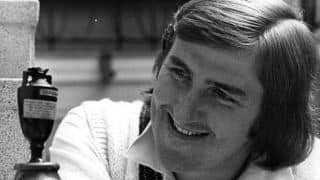