Defending champions Peshawar Zalmi, led by Sammy, will take on the new franchise Multan Sultans that has Sanga, in the PSL 2018 opener on February 22 at Dubai.

What s the key mantra to win a T20 tournament? Just draft Darren Sammy to your side.

Sammy, the bowler, had routed the English batting on his Test debut, claiming 7 for 66 in second innings. Sammy the bowler has taken a backseat now. He makes sporadic appearances at best. Yet, he wins an all-important final with the ball.

In the final of Hong Kong T20 Blitz 2018, Galaxy Gladiators Lantau were cruising in their chase of 201 against Hung Hom Jaguars, courtesy Kumar Sangakkara s belligerence.

The equation read 73 from 42 balls and Sanga was on 73 off 43. Jaguars skipper Kinchit Shah threw the ball to Sammy, who had gone for almost 14 an over in the tournament. In the league match between these two, Sammy was plundered for 52 from 3 overs. Anton Devcich had hit him for 3 consecutive sixes. Here was Sammy, jogging in to bowl to Sanga and Devcich ahead of the regular bowlers.

He played with the length, kept the batsmen guessing and the over went 1 1 1 1 0 1. Three singles later, Sanga succumbed to pressure in the next over and it was Jaguars game to lose.

Now 65 off 30. Gladiators still had big hitters in Devcich, Jade Dernbach and James Franklin. Sammy s next over, the 16th of the innings, went for 4 and Dernbach was dismissed.

He was now given the task of defending 22 off the final over against Devcich and Franklin. His final 3 deliveries went for 13 but he had sealed the game with his first 3, giving away 2.

What ensued was typical Caribbean-style celebration at a Mong Kok. [It was all] thanks to Ben [Laughlin]. He told me he was going to give me 20 [off the final over] but gave me 22. The wives of the owners said they want nothing but the cup and we delivered today.

Laughlin bowled the penultimate over with Gladiators needed 31. He gave away just 9.

The wags said ” Sammy we need to win the cup this year No excuses” so we granted them their wish. #HappyWivesHappyLives#champions @hunghomjdjaguars pic.twitter.com/s3hXuIuQBV

Sammy is a rare breed. Cricketing numbers will never tell the tale of the St Lucian giant (quite literally), who has an international stadium named after him. The two-time world champion captain was surprisingly not leading Jaguars in Hong Kong. Kinchit, 22, a Hong Kong international and son of the team owner led the side.

No, it s not my team, Sammy implies that he doesn t own it when asked why he isn t leading the side. We already have a captain, Kinchit, and he has done a terrific job, man.

Sammy is right. Kinchit led the Jaguars to their maiden title win in the Blitz. Explaining his role, Sammy elaborated: You know, whatever team I play in, captain or not, I will play a leadership role and that s why I am here. I try to make an impact with my performance or in the dressing room. That s what I try to do.

Sammy was brilliant on the field, nabbing some stunners and also contributed with an important 15-ball 21 in the final.

Another one in the bag pic.twitter.com/bMIYIr9Xiu

The Blitz got off to a cold start, quite literally. The temperatures hovered in the single digit. A handful of South Asian, Australian and British expatriates were the audience.

Agreed mate.. Need that Sun to be shinning or else im not coming out of bed.https://t.co/SBtzDu0TFb

It got warmer as the week progressed, and the crowd swelled. The final witnessed a full house. Sammy has emerged as one of the ambassadors of this sport and hopes to play a significant part in growth of cricket in Hong Kong: It has been good. Hong Kong isn t a place known for its cricket but you see the talent on display.

Trivia: The first recorded cricket match in Hong Kong dates back to 1841. Hong Kong and Shanghai play the first inter-port match in 1866 which, if you think about it, pre-dates the first Australian tour of England.

Look at the number of international players turning up. It shows that the interest is there. It s definitely bigger this year than last year. Hopefully the local players could learn from the likes of the Sangakkaras and Akmals and Laughlins and Bothas and improve their game. Hopefully, Hong Kong cricket will improve from here, added Sammy.

Just like Sanga, Sammy advocated for the quality of the tournament as well. He emphasised on the cramp schedule and spoke about the need to market it even better: It s [the intensity] good. Obviously playing everyday, so if you are not fit enough,it is going to take toil on your body. The only disappointing thing is that the crowd [other than the final] hasn t been as big as last year. So, hopefully we can market it more so that more people fill the stands. I think the cricket has been of very high standards.

For some reason I moved my head to get a better view and a split second later I felt a bullet fizz past my ear into the vacant seat, were Sanga s words in March 2009 after the Lahore terror attack on the Sri Lankan side. A rocket launcher had missed the bus and a hand grenade tossed towards the vehicle failed to explode. Sanga was that close to the end.

Nine years on, during the Hong Kong T20 Blitz, Sanga spoke on how important it was for cricket to return to Pakistan. He expressed his satisfaction over the recent games being played in the country and emphasised on the importance of tight security not only for the cricketers but also for the fans.

Sanga and Sammy head next to UAE for the Pakistan Super League (PSL). The Eliminators will be played in Lahore and the final at Karachi.

Pakistan have embraced Sammy as their own. Sammy, on the other hand, has played a major role in bringing international cricketers to the terror-torn nation. Not only did he play the 2017 PSL final at Lahore, he also convinced other international cricketers about the tight security for the World XI tour in September 2017. His objective was clear: he had famously told ESPNCricinfo on how he and the members of World XI had accepted the fact that they were going to be a part of something more important than just their selves.

PSL is a tournament I have embraced, said Sammy. It feels good to play a small part in bringing cricket back to Pakistan. My players and me went there [Lahore] and won the cup. So it s more pressure this year to defend. Hopefully I will be there, playing the PSL final at Karachi on March 25.

Defending champions Peshawar Zalmi, led by Sammy, will take on the new franchise Multan Sultans that has Sanga, in the PSL 2018 opener on February 22 at Dubai. 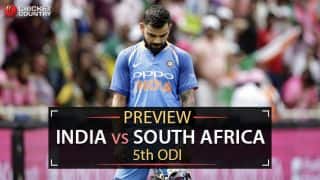