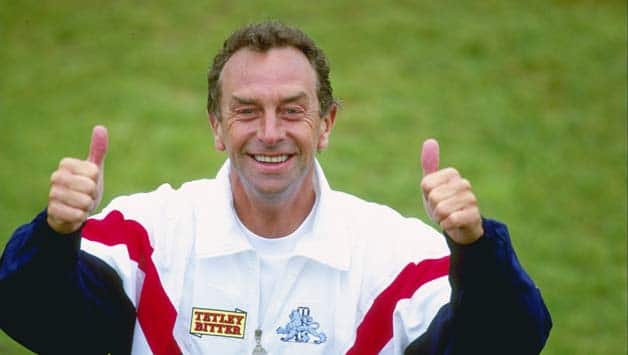 David Lloyd — entertaining as a player and commentator © Getty Images

When David Lloyd’s rather limited collection of runs for England is correlated with his cult-like status in the game and finally linked to his birthplace in the hinterlands far north, one immediately thinks of the flourishing plume of Neville Cardus, dipped in fertile imagination, making legends out of the honest, hearty, yet limited efforts of the Emmott Robinsons.

Indeed Lloyd runs Dickie Bird close — and perhaps upstages him from time to time — for the top position when the honour list of curious English cricketing characters are drawn up. And he managed to play just nine Tests and eight One-Day Internationals (ODIs) in his longish career.

But, if we look closely at the figures, we find that he is one of the rare batsmen to have ended with an average of over 40 in both forms of the game. Additionally, he was quite a handy left-arm spinner and one of the bravest close-in fieldsmen.

In the course of his yeoman’s service to Lancashire, he scored more than 27,000 runs and captured 276 wickets in all the formats of the game he played in. And he was instrumental in the county’s rise as one of the strongest of his era.

Lloyd’s contribution to the English cause was not done and dusted with the end of his international career as a cricketer. He coached England with distinction, with a healthy amount of dubiousness, the peak achievement being a series win over South Africa in 1998.

Yet, the reason for his almost fanatical following on Twitter, and his extraordinary popularity among the addicts of the game, stem from his personality quirks, which make him a supremely interesting commentator, after dinner speaker and a flipping lovable bloke.
Playing days

Lloyd started his career for Lancashire in 1965. The first few years were spent in establishing his place in the side and finding a balance between his left-handed batting and slow left arm spinners.  It was during this period that John Sullivan, his Lancashire teammate, gave him the nickname that stuck for life — “Bumble”,because of the facial resemblance with one of the characters on Michael Bentine’s show, The Bumblies.

By the late sixties he had moved to the top order and, a few years down the line, had been handed the mantle of captaincy. In his four years at the helm, from 1973 to 1977, Lancashire reached three Gillette Cup finals, winning once. When Lloyd stepped down from Lancashire captaincy in 1977, he was awarded a benefit year in 1978 which raised a then-record sum of £40,171.

It was during this period that Lloyd got his Test call up. It was against the Indians in 1974, and he was asked to open the innings with Dennis Amiss — walking in the large shoes of Geoff Boycott.

David Lloyd, coming in the side for Geoff Boycott, cuts Bishan Singh Bedi to the boundary during his unbeaten 214 against India at Edgbaston in 1974. Getty Images David Lloyd, coming in the side for Geoff Boycott, cuts Bishan Singh Bedi to the boundary during his unbeaten 214 against India at Edgbaston in 1974. Wicket-keeper is Farokh Engineer © Getty Images

His debut was Bradmanesque. Well, in a way. He scored more than the whole Indian team managed in their second innings. True, the tourists had tottered and stumbled to 42 all out in the second Test of that nightmarish tour. But, Lloyd did score an impressive 46.

His next Test was Bradmanesque in the true sense. Yet again, he outscored the full Indian batting line up. After the visitors had been bowled out for 165, Lloyd batted seven and a half hours for an unbeaten 214 — an innings ‘splendidly fluent’ according to John Arlott. It was a dream start to his Test career.

The runs dried up against Pakistan later that summer, but he did get a hundred against them, in the ODIs. He was now selected to tour Australia, and given the rather scary task of opening the England batting against Dennis Lillee and Jeff Thomson.

He did not start badly. At Perth, the fastest of the wickets, he batted over three hours in each innings, scoring 49 and 35. As the tour progressed, however, his visits to the crease became considerably shorter, and he finished the tour at Adelaide with scores of four and five. His batting average, which had stood at 260.00 at the end of his first series, had now plummeted down to 42.46. He never played a Test for England again.

According to John Arlott, “In a side routed by the `heart-line’ attack of Lillee and Thomson, he was effectively shocked and shattered out of Test cricket.” However, Lloyd maintains that for someone who made his way into the world from the backwaters of Accrington, Lancashire, an Australian odyssey was a remarkable experience, although admittedly the tour itself was horrible for England.

One distinct feature of his Test career is that apart from the double hundred in his second Test, he did not cross fifty in his any of his other 14 visits to the crease.

Lloyd was recalled to the ODI side, though. In 1978, against Pakistan, scored a fighting 34. But, when he played his next match — against West Indies at Headingley in 1980 — he broke his arm. That effectively ended his days for England. It was disappointing for many who considered his strokeful left-handed batting to be worth much more.

David Lloyd, however, took his limited highs and many lows squarely on his well-endowed funny bone.
“I came back [into the one-day side] in 1980 and I should never have been picked. (Ian) Botham was captain and you know how bad a captain he was – he chose me to play in that game. He must have been mad. I couldn’t see, for a start. I mean, I could see all right for county cricket but he brought me back against West Indies. And there was no chance of seeing them.”

It was this panache for bringing forth chuckles and guffaws that led Lloyd to become a public speaker in constant demand — and later into the most idiosyncratic of commentators.

According to him, his break as a public speaker came one day when he was introducing the members of the Liverpool Cricket Club in an event. He had proceeded to relate a couple of anecdotes about each member of the team. By the end of it he had been booked for a function.

However, before finally settling down in the commentary box, Lloyd’s career went through two more phases. One was short and somewhat whimsical. The second was one of the most important chapters of the David Lloyd story.

The first was the stint as an umpire from 1985 to 1987. He officiated in First-class and List A games, including tour matches against India and New Zealand. Later, in an interview to The Independent in 2008, he said, “Umpiring was such a rewarding job and I hope I fight the umpires’ corner in commentary.”

His first stint as a coach was with Lancashire, which proved a perfect prototype for what was to follow in his later assignment for England. He guided the county to their third Benson and Hedges Cup. However, in 1995, Lloyd came into conflict with Dermot Reeve, then coach of Somerset, while in the Old Trafford committee room.

Reeve, in his biography Winnings Ways, mentions Lloyd as saying: “I don’t like you Reeve. I never have liked you. You get right up my nose and if you come anywhere near me, I’ll rearrange yours.”

However, before long, Lloyd had been promoted to the flipping coach of England.

He was in charge for three years — from 1996 to 1999. Farsighted and maverick, he pioneered the concept of specialist coaches for the different departments of the game, as well as employing a fully operational support staff. It would not be too far-fetched to say that England became a thoroughly professional unit during his tenure. And of course, the team talks during this period were notable for being powered by the eccentric oratory that was the hallmark of David Lloyd.

But, as in the stint for Lancashire, he courted immense controversy in his national role as well. When the first Test in Bulawayo in 1996 ended in a draw with scores level, his statement was: “We murdered them. We got on top and steamrollered them. We have flipping hammered them. One more ball and we’d have walked it. We murdered them and they know it. To work so hard and get so close, there is no praise too high. We have had some stick off your lads. We flipping hammered them.”

As expected, the Zimbabweans did not really like this flaming speech. In the following Test match, one banner in the crowd read “Wanted.David Lloyd. For Murder of Zim Cricket Team. Last seen with his finger up his nose talking complete bollocks. He knows it and we know it.”

Later he had another brush with controversy when he openly voiced his doubts about the action of Muttiah Muralitharan.

By the end of the 1998-99 season, it was evident that his contract would not be renewed. The early exit from the 1999 World Cup played in home conditions did not really allow him to sign off on a high.

The ECB Chairman Lord MacLaurin paid tribute to his stint as coach by saying: “We owe David a huge debt for the job he has done as England coach since taking over the role in 1996. During his time in the job, David has introduced many innovations that mean we are now world leaders in several aspects of our approach to the game at international level.”

Speaking for the English team, Alec Stewart said: “It’s disappointing news but it’s been a real pleasure to work with “Bumble”, a coach who is thorough, loyal to his players and completely professional. He has brought a real sense of passion to the job of England coach and it would be great to reward him with the World Cup as a final vote of thanks from the players for all he has done for us.”

On the other hand, when his autobiography, Anything but Murder, was published, former cricketer Graham Thorpe reacted strongly to the criticism meted out to him in the book. Lloyd was also censured for his critical views of Nasser Hussain’s poor preparation for Test matches, and Andy Caddick’s insecurity about his cricket.

Lloyd joined Sky Sports in 1999 as a commentator, was immediately successful and became especially recognised as the voice of Twenty20 cricket since its launch in 2003. Although he still considers T20 as entertainment with the equipment of cricket rather than a format of the game, his endearing and exciting style have made his popularity shoot sky high.

It is quite intriguing that he made a career of commentating. In fact, had he resorted to his Accrington accent, very few people outside his birthplace would have made out what he was saying.

His commentary is his heady punch of the serious and the entertaining and this makes him irresistible to his many, many fans. His pertinent observations are mingled with anecdotes about many of the colourful characters with whom he has shared parts of his cricketing life.

At 66, Bumble is still going strong. He obtained his motorbike license just three years ago and is sure to leave no turns unexplored in the journey of life.

His infectious enthusiasm and charm have already enriched the world of cricket for over four decades. Here is hoping that it continues that way for several years.