This was the first win for Pakistan against South Africa in Champions Trophy.

0 number of golden ducks for AB de Villiers before this ODI. This was the 1st such instance in his career and overall 7th duck across formats.

2nd golden duck for Wayne Parnell in ODIs. His first came in 2011 against Bangladesh at Dhaka. He was bowled in both innings, becoming the 9th South African to do so. However, the record is still held by Allan Donald for getting bowled for a golden duck as many as four times.

13th instance of two South African batsmen being dismissed on a golden duck in an innings. The last such instance took place in November 2014, against Australia at Perth. This was also the 26th such instance by a team against Pakistan and 5th for South African against them.

72.11 strike-rate of David Miller during his knock of unbeaten 75 runs. This was the lowest strike-rate of Miller in an innings with 50-run cut-off. 75 not out is also his personal highest against Pakistan.

2.5 economy rate in 8 overs for Imad Wasim. This is the joint-3rd best economical bowling by a Pakistani spinner against South Africa with an 8-over cut-off. Mohammad Hafeez was the previous bowler to do the same, but he had completed his 10-over quota, against South Africa at Dubai in 2013.

6th 3-wicket haul for Hasan Ali in his career of a mere 18 ODIs. Since his debut in August 2016, all other Pakistani bowlers have combined taken six 3-wicket hauls Mohammad Aamer (2), Mohammad Nawaz (2), Imad Wasim (1) and Umar Gul (1).

24 runs conceded by Hasan in this innings. Economy of 3 from 8 overs is his personal 3rd-most economical spell in ODIs with 5-over cut-off.

48 runs added by Kagiso Rabada and Miller together, the highest partnership by a South African pair against Pakistan for the 8th wicket in ODIs, beating the previous best of an unbeaten 45 by Mark Boucher and Lance Klusener in 1999 World Cup.

461 wins for Pakistan in ODIs, the 2nd-most by any team in ODIs. Pakistan went past India s tally of 460 victories and is only behind Australia’s 554.

9 fours hit by South Africa in this match, the joint-least in a Champion Trophy match and first instance of involving a Test-playing nation. Previously, it had happened twice: first by Netherlands against Pakistan in 2002 edition; second by Kenya against India in 2004.

12 South African batsmen had scored a 50-plus score by hitting only one four before this match. David Miller became the 13th from his country, hitting only a four in his resilient 75*. Hansie Cronje (5), JP Duminy (4) and Jacques Kallis (3) are the only players to have done it multiple times.

3 captains were dismissed on a golden duck before de Villiers in Champions Trophy. Sanath Jayasuriya was the first captain to do so in 2002 edition against India, followed by Richard Staple of USA against New Zealand in 2004 and Habibul Bashar against West Indies in 2006. 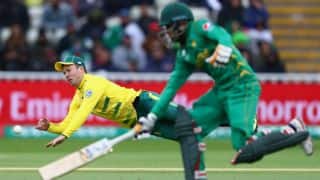