Joe Burns made his debut against India last Australian summer, and he has done justice to the chances given by the selectors post the retirement of Rogers, and most importantly, he has been able to strike a chord with David Warner.

Australia’s future looked bleak, having lost as many as 6 experienced Test cricketers post Ashes 2015 in England. Perhaps the biggest loss came in the opening department. Three years ago, ahead of Ashes 2013, Australia were forced to summon Chris Rogers out of complete obscurity to help them provide stability up in the order after their innumerable experiments failed. Rogers did an excellent job in his second stint, partnering David Warner to make a successful pair at the top. Now, with Rogers’ retirement, Australia have found another stable partner for Warner in Joe Burns, and the signs have been positive. FULL CRICKET SCORECARD: New Zealand vs Australia, 2nd Test at Christchurch

Perhaps the only thing that Warner rued during his partnership with Rogers was the lack of time. Warner admitted after Rogers’ retirement that he would have preferred to spend a little more time with Rogers, who had scored heaps of runs in both Australia and England. Warner and Rogers played for about two years together — starting from Ashes 2013 in England to ending two years later in the same country.

Warner and Rogers had tremendous success as a pair even when Australia’s batting struggled in England in general. Ashes 2015 had quite a few instances of the rest of the batting squandering good starts provided by Warner and Rogers. The retirement of the latter when he was in rich form was one of the damages Australia would have found tough to bear.

But, Rogers’ big shoes have been filled in well by Joe Burns so far. The right-handed batsman from Queensland made his debut against India the previous Australian summer, and he has done justice to the chances given by the selectors post the retirement of Rogers, and most importantly, he has been able to strike a chord with Warner. ALSO READ: New Zealand, Australia join together to mark fifth anniversary of deadly Christchurch earthquake

Before Warner and Rogers, one has to go back to Matthew Hayden and Justin Langer for a strong Australian opening pair over a sustained period of time. Hayden and Langer’s mantra was ‘you watch my back and I’ll watch yours’; it had worked extremely well for them and their side. Australia would hope to see Warner and Burns too making it big, in which case their bonding off the field should play a strong role. A lot has already been written about their Warner and Burns’ ‘bromance’, a new-age term that is still to make it to the dictionary. Both Warner and Burns have featured on each others’ social media posts, and there have been banters as well. Most importantly, on a serious note, the real benefit lies in the fact that both Warner and Burns have age on their side.

While 29-year-old Warner rued his partner Rogers walking away, he will enjoy batting with 26-year-old Burns. With these two at the top of the order, Australia will also have a variety of a left-handed and right-handed batting pair in contrast to the left-handed duo of Warner and Rogers. Australia are on the cusp of becoming the world No. 1 side, and it will only be fitting if these two flourish alongside their team’s progress. 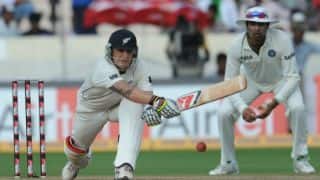