Sunrisers Hyderabad jumped to the top of the Indian Premier League (IPL) points table after an impressive victory over Delhi Capitals on a track that was difficult to bat on. They read the conditions, quickly adapted to them and then completed their third win on the trot. (READ: Bairstow, Nabi star as SRH beat DC)

Here are the highlights from their five-wicket win at Kotla

Mohammad Nabi put up another match-winning performance for SRH following his best IPL figures of 4/11 against Royal Challengers Bangalore earlier this week with 2/21 against DC on Thursday night. Nabi bowled in two spells the first three of his four overs came in the Powerplay where he strangled the hosts as he allowed just 18 runs in them apart from dismissing opener Shikhar Dhawan on 12. He returned in the 10th over and immediately struck, removing another left-hander with big-hitting Rishabh Pant holing out in the deep on 5. In his four overs, DC managed to score just one boundary and lost two wickets.

By the end of Powerplay overs, DC had lost both their openers and managed 36 runs in total. By this time, it was clear how the pitch was faring – low and slow, not conducive to stroke-making. Biding time was crucial. However, pressure of accelerating the scoring-rate and some clever bowling combined to dent their progress. Delhi captain Shreyas Iyer realised that and relied more on singles and doubles than big shots. All he needed was someone to stick around. Nobody did. Pant took on Nabi and ended up losing his wicket. Sandeep Sharma bowled a knuckle delivery and the promoted Rahul Tewatia failed to read that, chipping that into the hands of the cover fielder. The experienced Colin Ingram cut one from Siddarth Kaul and was brilliantly caught by Manish Pandey at backward point. All three managed 5 runs each. Iyer’s 41-ball 43 prevented a full blown collapse.

Having struggled initially to find his timing, Axar Patel eventually began finding the boundaries. He replaced Iyer who fell to Rashid Khan off the first delivery of 17th over. With Chris Morris departing after a 15-ball 17, DC slumped to 107/7. Axar’s lusty blows, that saw him cracking a four to end the penultimate over before thrashing Kaul for two sixes in the final over, lifted DC to 129/8. He finished unbeaten on 23 off 13

Jonny Bairstow set the tempo with an early assault. Continuing his belligerent form in the tournament, Bairstow struck 48 off 28 balls with nine boundaries and one six. Twice he hit three boundaries in an over to throw Delhi attack off-guard. After the Powerplay, the score was 62/0 with Warner’s contribution being just 6 off 11 and Bairstow’s 47 off 25. This was also the fourth game in a row that SRH were dominant in the Powerplay. 54/0 vs KKR, Kolkata. 69/0 vs RR, Hyderabad. 59/0 vs RCB, Hyderabad. 62/0 vs DC. While others were struggling to find boundaries, Bairstow’s audacious stroke-play stood out. It could well have been a different story had Axar managed to hold on to a difficult catch off his own bowling when Bairstow was batting on 5.

While Bairstow had set the stage for a facile win with a dominating innings, DC managed to put up a late fightback. From 95/2, the visitors slipped to 111/5 in 16 overs. Sandeep Lamichhane and Kagiso Rabada kept SRH from wrapping up the game early. However, with the equation coming down to 16 off 18, Nabi took a four off Morris to reduce the gap. In the penultimate over, the allrounder overcame nerves and smacked a four and six to finish the game, capping off a perfect match. He remained unbeaten on 17 off 9 after taking two wickets and as many catches. 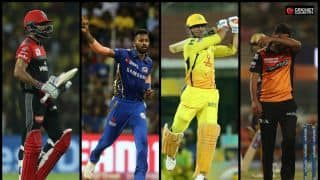