Delhi Daredevils not bothered about Kevin Pietersen's history with England

Delhi Daredevils not bothered about Kevin Pietersen's history with England

Pietersen was named the captain of Delhi Daredevils on Tuesday.

It is no secret that Kevin Pietersen loves playing in the Indian Premier League (IPL). What will make it even more interesting for the 34-year-old former England batsman is that on Tuesday he was named the captain of Delhi Daredevils (DD) with Indian wicketkeeper Dinesh Karthik as his deputy for the upcoming IPL 7.

TA Sekar, director of GMR Sports, the owners of DD, said that the idea behind naming Pietersen the skipper was that “he has been a very good player for us and then he has got the previous experience as captain.” Talking to DNA, Sekar said on Tuesday, “KP [as he is known as] is highly respected among his teammates. We want to give the responsibility to him to play as a leader and set an example. It is a challenging task for him because leading in IPL is a different ballgame, different from leading your country. He has been very good with the franchisee. Besides, he is the senior-most player.”

Sekar, former India pacer, said that coach Gary Kirsten suggested that KP lead the team. “It was decided by the management, the owners and Gary Kirsten the coach,” Sekar said. “The names were coming. We had decided to go for KP in the auction as he is a very big name in international cricket, and he has been very successful in IPL in the year he played for us. He has won matches single-handedly for us.”

Considering the recent past when Pietersen prematurely retired from international cricket following differences with the England and Wales Cricket Board (ECB), Sekar said that it would not affect the DD atmosphere.

“KP is totally out of international cricket. He is not going to bother about his future with England. All he is going to concentrate is playing English county cricket, may be IPL, and may be go on to play Big Bash League (BBL). These are the three leagues he will play, that will keep him in good form. If you look at BBL, it is played in December-January. He gets two months gapand he plays in IPL. And then immediately after IPL, he goes and plays in English county. And then he gets 2-3 months. His body will also recoup. He is no longer 25 or 26 years. He is 34. The rest in between these leagues will also give him time to take care of his body,” Sekar said.

Sekar added that the franchisee is not concerned about KP’s past in which he has had trouble with coach Peter Moores, when he was England captain or with the ECB.

“As far as DD is concerned, we are not worried about what he did with England or when he played in South Africa or when he played for any other IPL franchise. His behaviour and commitment to the team have been outstanding. He was participating in all the team meetings [in the past], encouraging all the youngsters when he was playing in 2012. He has been a live-wire on and off the field. He did not have the air that he is a world-class player. He came down to the Indian domestic players, gave them advice, whenever a youngster got a wicket, he ran from fine leg or wherever in the deep and encouraged the bowler. As far as we are concerned, he has been an outstanding member of the DD side,” Sekar explained.

How can anyone forget Pietersen walking on crutches during 2013 IPL in the DD camp. Despite being ruled out of IPL 6 due toknee injury, Pietersen’s presence in the side was a morale booster to the otherwise beleaguered DD side last year. His commitment towards the team impressed the men who matter.

“Even though he did not play in 2013, he came for some commercial assignment in Mumbai and came down to spend some time with Unmukt Chand during practice. He was tweeting every match, he was sending messages every match. Even though he was not present with us physically, his mind was only with us (sic),” Sekar said.

Pietersen and Karthik will make a “very good combination,” felt Sekar. The 57-year-old pace guru from Chennai said, “Karthik is a very astute student of the game. KP has got an able deputy in Karthik, who knows the Indian conditions very well. These two will form an excellent combination. Gary is an excellent man manager, a very good coach. His communication is excellent. He has picked his own support staff. We have picked up a very good team in the auction. Going by all these things, DD has been making the right moves but we have to make the right results.” 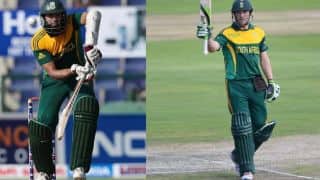