Bhuvneshwar Kumar bowled a splendid over at the death to help SRH get back in the game.

Nathan Coulter-Nile keeps things tight: Nathan Coulter-Nile is proving to be a very useful bowler for DD. He bowls with good pace and hits the right areas consistently. In this game, he mainly bowled in the middle and kept things tight. He went for only 25 in his four overs and accounted for the wickets of David Warner and Karn Sharma.

Moises Henriques holds the innings together with a fantastic 74 not out: Moises Henriques was asked to bat at No. 3 and he delivered the goods for SRH. He showed why they had been promoted ahead of Eoin Morgan and Ravi Bopara. He started off slowly but then went on to pick up pace. In 46 balls, he scored 74 not out, smashing five sixes along the way. That showed that Henriques can play an anchor’s role for the SRH.

Quinton de Kock’s flashy fifty: Quinton de Kock went on to score a fifty in his maiden appearance in the IPL 2015. De Kock played with trademark ease, peppering the off-side with boundaries. De Kock looked a cut above the rest during his fifty and DD felt they would get home if he saw it through. However, he was stumped on 50 off Karn Sharma. He fell in the ninth over, when DD’s score was 60. It is quite remarkable that he had scored 50 of those runs.

Delhi Daredevils suffer a collapse: Between the ninth and the 11th over, DD lost three wickets for only six runs. From 60 for one, they slipped to 66 for four, with SRH going on to become favourites. When they lost de Kock, JP Duminy and Yuvraj Singh in quick succession, not many gave them a chance. Karn Sharma took two for 12 in his three overs.

Kedar Jadhav’s strokeful innings: Kedar Jadhav took control of the DD innings and played some fabulous strokes. Not only did he smash it off conventional strokes. He managed to also play some deft strokes along a 24-ball fifty. He ultimately finished with 63 not out off 34 balls. Jadhav’s innings had given DD great hope for a victory. It was sad that such a good knock had come in a defeat. 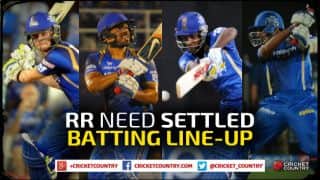