Table-toppers Delhi Daredevils face the onerous tasking of stopping this fearsome juggernaut in Chennai – a task that wouldn’t be easy despite their sustained brilliance right through the season. 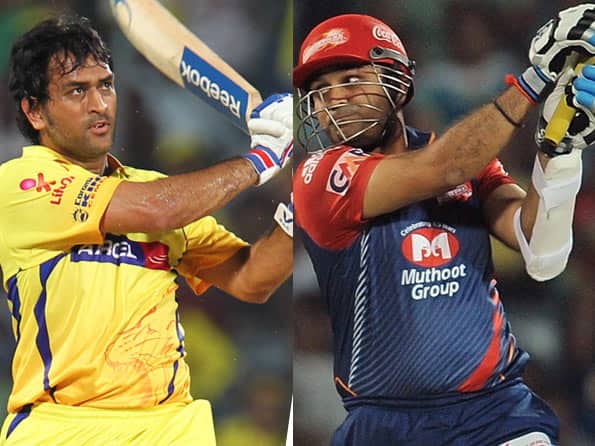 Cometh the hour, cometh the man. Mahendra Singh Dhoni’s destructive 20-ball 51 bludgeoned the Mumbai Indians into submission and helped Chennai Super Kings storm into the second qualifier of the Indian Premier League (IPL) 2012. A team that was patchy throughout the league stages suddenly blossomed into a dominating unit riding on the success of their captain. The victory against Mumbai gives ample evidence that Chennai have the “X-factor”- that helps them time and again rise to the occasion.

Table-toppers Delhi Daredevils face the onerous tasking of stopping this fearsome juggernaut in Chennai – a task that wouldn’t be easy despite their sustained brilliance right through the season.

The two-pronged assault of Dhoni and Dwayne Bravo came as a blinder at the finish after Michael Hussey and Subramaniam Badrinath’s steadied the Chennai ship through troubled waters. That, in effect, set a platform for Dhoni and Bravo. The other encouraging sign for Chennai was that their biggest asset – the spinners – came to the party and stalled Mumbai with some tight bowling. They were well complemented by Albie Morkel and Bravo.

As discussed in a previous article, Dhoni may have luck on his side, but he also has the guts to take brave decisions.

The qualification to the play-offs may have been Dhoni’s luckiest escape and he stepped on the accelerator when it mattered most. Off late, the swashbuckling Dhoni has been a rarity as he has taken on the responsibility of anchoring the innings for India and Chennai. Against Mumbai, he walked in with aggressive intent from the outset and his body language showed a sense of urgency. Some of the shots he played were absolutely brilliant, the most spectacular being his signature helicopter shot off Lasith Malinga that sailed out of the stadium for the longest six in IPL5.

While Delhi have failed to win their knock-out games so far (discussed below), Chennai altered the course of their history in 2010. After the heartbreaks in IPL 2008 (final) and 2009 (semi-final), Chennai lifted the trophy in 2010. In fact, in 2010, they were on the brink of elimination and it was Dhoni’s belligerence in their last league game that took them through to the semi-finals. The rest, as they say, is history.
Will 2012 be a more spectacular encore of 2010?

Delhi have been a dominant force in IPL 2012 and have made amends from their bottom-table finish in the 2011 season. Right from the pre-season transfers, one could sense that they had done their homework and were geared up for an improved performance. The acquisition of Kevin Pietersen and Mahela Jayawardene added tremendous firepower to their batting line-up which already boasted of the likes of Virender Sehwag and David Warner. Ross Taylor may not have lived up to his reputation during this IPL, but his mere presence in the middle order is threatening. Although Pietersen left for national duty, Warner’s arrival made up for that loss.

Morne Morkel has been brilliant throughout the season and has trumped Lasith Malinga – the most devastating bowler in T20 – in the wickets column. The tall South African has used his height and generated steep bounce on placid Indian surfaces. The surprise yorker is a lethal weapon in his armoury as it is fast and directed at the batsman’s toes. He has had good support from Umesh Yadav, Varun Aaron and the left arm-spinners. Despite all the positives, there is one thing that would bother Delhi – their history.

Since the first season, Delhi haven’t won a knock-out game in the IPL or a match that determined their progress to the next round. In IPL 2008, they met the Shane Warne inspired Rajasthan Royals in the semi-finals and were comprehensively beaten. Their exit from IPL 2009 was most shocking as they had dominated the whole season and had topped the table, but in the semi-final, Adam Gilchrist tore them apart with characteristic blitz. In 2010, Delhi’s qualification depended on the result of their last league game, which they lost. Their defeat to Kolkata Knight Riders in the first qualifier during this season follows the unwanted pattern.

Although the current Delhi setup is different from the one that played in the first three seasons, it is imperative that they do not allow history to burden them following their loss to Kolkata. Also, they have to ensure that it doesn’t become a monkey on their back much like the “chokers” tag has become for South Africa.

There is nothing to choose between the two teams on their head-to-head record. In their two encounters during this season, both teams share the honours. When Chennai travelled to Delhi, they were beaten comprehensively. Chennai returned the favour in their home game. Considering the fact that their next encounter would be played at MA Chidambaram Stadium, Delhi may be a bit worried keeping their last visit in perspective.

It is clear that the two teams go into the second qualifier with contrasting fortunes. One comes in with great history but hasn’t enjoyed a good league phase, and the other is determined to add silverware to its cabinet on the back of a brilliant season.

IPL 2012: TNCA allowed to use unauthorised stands for matches