Denesh Ramdin, born on March 13, 1985, is a West Indies wicketkeeper-batsman who has enormous talent and promise. However, Ramdin’s record isn’t too great yet, there is a lot of hope for the future with his recent performances with the bat. Nishad Pai Vaidya profiles Ramdin’s career.

Denesh Ramdin is the typical modern West Indian cricketer. The wicketkeeper-batsman is genuinely talented and was earmarked for success at a young age, however, the performances haven’t quite justified his potential. Over the years, he has been a stable wicketkeeper and a batsman who has shone brightly in patches. There was a phase when he wasn’t in the side, but is by far the best option West Indies have at their disposal. Having been the vice-captain and also leading the side in the odd game, Ramdin is seen as one of the seniors in a side that is looking to recover from the depths of despair.

Born on March 13, 1985 in Trinidad, Ramdin rose through the ranks at an early age. In the year 2000, he played the under-15 World Cup. Lendl Simmons, Ravi Rampaul, Xavier Marshall and Asad Fudadin were some of his teammates on that tour. Over the years, he was a regular part of the Trinidad and Tobago Under-19 setup and then graduated to the West Indies Under-19s. In 2004, he made his First-Class debut while playing for the West Indies B side and was then chosen to lead the West Indies Under-19 side at the World Cup in Bangladesh.

At that World Cup, Ramdin’s boys went all the way to the final, only to lose to Pakistan. His contribution in the semi-final was of vital importance as he scored 72 against England, which helped West Indies record a match-winning score. While he did record good scores with the bat, it was his keeping that also caught the eye during that tournament. His rise coincided with a time when West Indies were searching for wicketkeepers. Ridley Jacobs was past his prime and they had actually recalled Courtney Browne. So, when he scored 472 runs in his first full First-Class season, he was on the radar of the selectors.

Ramdin’s call-up came at a time when West Indies were struggling with their player-board disputes over contracts. He made it to the side for the tour to Sri Lanka, where an under-strength unit took on the hosts. In his maiden Test, aged only 19, he showed good application to score 56 in his first innings. It came against an attack comprising Chaminda Vaas, Muttiah Muralitharan, Lasith Malinga and Rangana Herath. In the tri-series that followed, he put in some good performances with the bat. Against India in the must-win encounter, his 74 not out nearly took West Indies home.

Over the years, he has put in such performances, but they have been few and far between. A fighting performance against Australia at Hobart and another good fifty against India on a tough pitch at Jamaica showed that he had the grit and character to perform. He held on to his spot for five years on the trot, with no major threats coming his way. Carlton Baugh did briefly take over his spot in One-Day Internationals (ODIs) in 2006 and he tends to be more destructive with the bat. But Ramdin was back for the ICC World Cup 2007, his most notable performance was a fifty against Australia in what was a disappointing campaign for them.

Despite that, he was still showing signs of improvement. In 2009, he smashed 166 not out against a good England attack at Barbados. At the same time, his ODI performances were moderate and did not match the expectations. But, it was more or less understood that he was their first choice wicketkeeper. But, by 2010, they had lost patience and he was axed from the side after the South Africa series. Instead, they brought back Carlton Baugh who also made it back into the ODI side. Baugh was originally selected for the ICC World Cup 2011, but his injury meant that Devon Thomas got the nod, ahead of Ramdin. It is interesting to note that Thomas hadn’t played international cricket till then.

Ramdin did get back into the ODI side in 2011 and during the tour to India, he nearly got his first ODI ton. He scored 96 at Indore, in a game that is more famous for Virender Sehwag’s double ton. After a nearly two-year long wait, Ramdin finally got a chance to play Test cricket. During the tour to England in 2012, he made a comeback and scored a ton in the third Test. That of course is more famous for his act of pulling a paper out of his pocket once he got to his milestone. It read, “Yeh Viv Talk Na!” The great Viv Richards was critical about his batting before the game.

But, since his return, things have been better. Since May 2012, he has scored three Test tons, the latest coming on the tough tour to New Zealand. In March 2014, he also scored his first ODI ton against England at Antigua. It was a rearguard action and he single-handedly kept West Indies alive in a tall run-chase.

Looking at the recent performances, there is a lot of hope for the West Indies fan. But, Ramdin has to maintain that consistency to be counted amongst the best wicketkeeper-batsmen in the world. A Test average of 27.25 and an ODI average of 21.65 is no reflection of his ability. 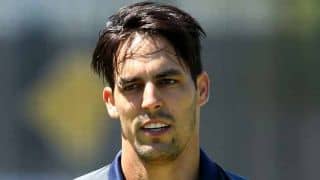 ICC World T20 2014: Mitchell Johnson in doubt for the tournament with infected toe 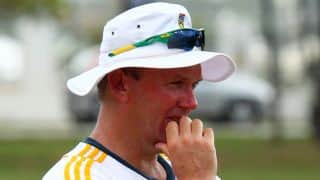