That day, William Oscroft was not too keen on listening to the umpires decision.

On August 26, 1875, William Oscroft refused to budge despite being given run out. Abhishek Mukherjee narrates an unusual story.

William Oscroft of Nottinghamshire and William Clarke s All England XI had a career that lasted 18 years. He scored over 7,500 runs, and sometimes kept wickets when he didn t bowl round-arm fast. Had his career not come to a premature end due to locomotor ataxia, a result of cold and overexertion, there would certainly have been many more runs.

Oscroft did not have the best of trysts with run outs. In 1865, for example, Oscroft scored 69 and 34 in a low-scoring encounter at The Oval. Surrey needed 14 when the last pair was out. They got the runs, but not before a local umpire ruled a batsman not out despite him being out by a yard and a half . Surrey won the match, but their relationship with Notts became so strained that they did not play for another two years.

When WG Grace took his squad to Australia in 1873-74, Oscroft was having a fine partnership with GF Grace (they added 133) against Ballarat. GF hit one high in the air; the fielder at point dropped it but noticed Oscroft outside the crease and ran him out. Oscroft got out for 65; GF went on to score a hundred.

Oscroft himself told a different version to Alfred Pullin. A spectator had offered him 20 at lunch (he was 62 at that time) if he managed to go past WG s 126. Oscroft told: GF Grace put a ball through the slips and called me for a run. I thought though I may have been mistaken there was nearly time for two runs, but when I had got right up to him he said, you can go back I shan t come. The result was I was run out.

There are more stories of Oscroft on that tour. For example, he carried a lot of things four times as much as all the rest of the team put together to sell them to the Australians. He sold the entire stock ( could have sold more ). This was in stark contrast with the others, who acted gentlemanly and refused to sell mementos and photographs.

But let us not deviate. 1875 was not going good for Oscroft the batsman. He had started the season with 53 and 41 against Derbyshire, but his other 17 First-Class matches would fetch 346 runs at only 11.53.

The match against Yorkshire, at Bramall Lane, had not gone well either. Nottinghamshire did win, but Oscroft got two scores of 9. Worse, he was run out in the second innings.

Against Gloucestershire at Clifton, WG had hit a six off him. This is not as trivial as it sounds, for in those days you had to clear the ground to obtain a six. WG s hit was humongous: to quote Robert Low, it went over square leg and out of the ground, landing among the houses on the other side of the road which skirted the ground.

That was just above a week before the return match against Yorkshire, at Trent Bridge. Once again the Notts bowlers went on a rampage. Alfred Shaw and Fred Morley bowled unchanged for 43 four-ball overs and shot out Yorkshire for 49.

Oscroft strode out with wicketkeeper Frederick Wyld. Sure enough, the run out menace did not ditch him. On this occasion, he was given run out for 4.

Oscroft had enough. He was simply not going to leave. There was nothing doing, umpire or no umpire. No one had seen anything like thus, certainly not the umpires, Thomas Plumb and Cornelius Coward, arguably the best and worst possible surnames in the profession.

How does one make a batsman leave the crease when he refuses to? The umpire can rule him out, but his job ends there: surely it is not his responsibility to force him out?

Yorkshire captain Joseph Rowbotham left the ground to confer with Richard Daft, his Notts counterpart. It is not clear whether MCC was referred to; neither Gerald Brodribb (in Next Man In) nor Christopher Martin-Jenkins nor Brian Levison (in All in a Day s Cricket) mentions that. One cannot help but feel for the bemused spectators.

In the end it probably helped that Oscroft had a lot of respect for Daft. He was indebted to him, too, in more ways than one: of the many items he sold on that 1873-74 tour, there were scores of photographs of Daft and himself. Later, in 1879, he would tour North America with Daft s men (the squad is in the photograph with the article).

Oscroft finally gave in after over half an hour s waste of time. Yorkshire came back remarkably, bowling out the hosts for 87 and piling up 183 (Shaw took 5 again). Chasing 146, Nottinghamshire were bowled out for 58. Daft scored 9. 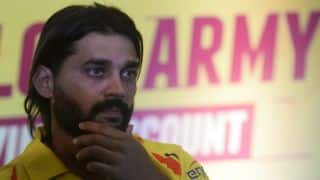