To control the damage of the English and Australian summers, from now on every decision of the team management had to be passed through the PACIFIC consultant to optimise fan, critic and media opinion. 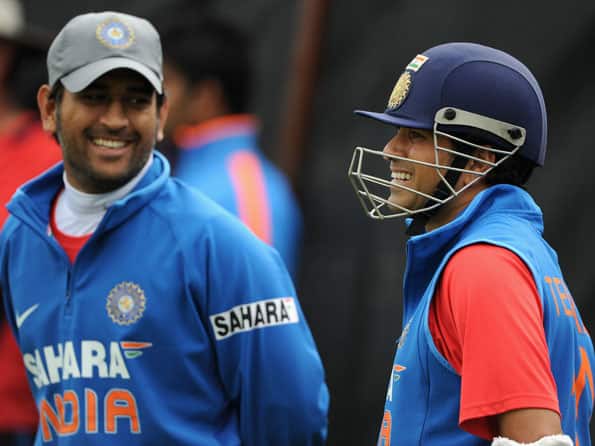 “Hi, I am the new PACIFIC (Player’s Accountability to Critics and Indian Fans — Implementation Committee) consultant to help you with choosing the team,” a voice spoke in clipped, rigorously Americanised accent.

Mahendra Singh Dhoni looked up to find a young man in swanky suit and flashy tie standing in the doorway of his hotel room.

The Indian captain sighed. “Of course, come in.”

From his attire, to his laptop, to his briefcase, everything about the stranger seemed to shine. So much so that as he approached, Dhoni absentmindedly anticipated some lateral movement.

The PACIFIC had been set up by the Board of Control for Cricket in India (BCCI) after 15 minutes of brainstorming in Hotel Burj Al Arab, Dubai.

A late night call had informed the skipper that such a high-profile consultant was on his way, sporting a gilt-edged MBA beside his name. The short barked missive from N Srinivasan had made it clear that the BCCI could no longer afford to carry a team the fans did not support, and the critics rampantly castigated.

To control the damage of the English and Australian summers, from now on every decision of the team management had to be passed through the PACIFIC consultant to optimise fan, critic and media opinion. Accountability had to be taken seriously these days. Dhoni’s half-hearted query about the cricketing background of this curious addition to the team had been met with the monotonic drone of a disconnected transcontinental phone line.

The young man lowered himself into a plush leather chair.

Dhoni eyed him uncertainly for a moment. “What are we supposed to do, again?”

For a moment this messed with the air of jovial enthusiasm of the MBA. “Didn’t you read the plan that I sent you last evening?”

Dhoni’s eyes guiltily swept across to the corner of the room where a 294-page document in spiral binding had been thrown into the waste bin.

“Well, you know … what with leading the national team in three different formats, keeping wickets, batting, press conferences, team meetings and all that …”

“No issues,” the consultant took this hitch in his seasoned step. “We are here to choose your opening batsmen for the next One-Day International (ODI) against Australia.”

Dhoni started – his monk-like equanimity tested to the hilt. For the last 10 months, every Tom, Dick and Harry had been claiming more knowledge about captaincy and team combination than him, but none of them had yet been thrust into his hotel room in the form of an empowered decision maker – well, almost no one, one had no choice but to withstand the official national selectors.

The shiny MBA hastened to put him at ease.

“I am here only to optimise your choice. Obviously you know more about cricket than I can ever hope to …”

“You think so?” Dhoni was genuinely surprised. “I thought everyone in India knew more about the game than me …”

The MBA laughed. “Not me. My speciality is a feel for the market pulse. You decide, and I will tell you whether the decision is optimal from the fan and critic point of view. We will weigh the risks, and may have to revisit our decision if required. So, down to business … who do you think should open in the next match?”

Dhoni thought for a while. “Sachin … ”

“Let me stop you right there and tell you the possible reactions. Putting personal landmarks above the country. Looking towards the past and not the future. Letting big names take precedence over performance …”

“Look buddy, the big name is big because of a reason. Since 1991, India has won only five ODIs against the Aussies in Australia. Three of them came during our last tour, and I know because I happened to be leading in those matches …,” he broke off wistfully. “Of these five ODIs, Sachin top scored in three, and even in the other two, he changed the whole game for India. I don’t really get the dope about personal records and all that … but when he has scored a hundred, we haven’t found any reason to complain…”

The consultant raised his hands.

“But Mahi, how many people will know all that? My market survey says about 0.05%. We cannot bother about that negligible a percentage of the population … we have to look at the big picture…”

“But, he may be the only one who can win the match for us …”

“We cannot let a small thing like winning come into this. A lot of fans still stick around because they can unleash self-righteous rants about India’s continuous losses, and how Tendulkar’s personal record is being given more importance than a win. Think about the effect a win engineered by Tendulkar will have on these countless numbers. It will snap them out of their snug, comfort zones. They might not retain enough motivation to watch cricket anymore.

Especially now, when it is a bit too late to suggest that you are piggybacking on a team built by someone else. It will also clash tremendously with their perception that Sachin is not a match winner… Too many negatives.”

“So, you mean we need to go in with Veeru and Gautam and also lose the match for the benefit of the fans?”

The MBA shook his head patiently.

“No, as I explained, we will just discuss the possible public reactions. And then revisit the choices if necessary. Now, let us consider Sehwag. Reactions ? He has been batting irresponsibly, he hasn’t scored in recent times, he does not care about fitness, he can’t play fast bowling …”

“Can’t play fast bowling? He has some hundreds in Australia and South Africa.”

“Again, you’re the cricket expert, Mahi, but I am the expert on public pulse … We need to stick to our roles. Public wants to see him disciplined for all the rash strokes he has played. The 219 is more than three months old, almost prehistory in the memory of a fan. The only thing working for him is that he may be the candidate to replace you as captain, but that is in Tests. For ODIs, his long list of sins can be considered boundless.”

“Well, he has been out fending short balls, has supposedly put IPL ahead of the country and has not scored too many in recent times …”

Dhoni’s unflappable cool wavered for a while.

“So, who do I send out to open? Or do you suggest we go in with the score reading 0 for two?”

“Have you considered Ajinkya Rahane …?”

A crease formed on the captain’s forehead.

“He is not even a regular opener for Mumbai.”

“True, but by now no one remembers that. I doubt too many people knew that in the first place.

He opened in his T20 debut, didn’t he?” the MBA nodded. “But, you are right. If he fails, people may dig out that fact. They may ask the wisdom of sending in a young non-regular opener in Australia against Australia … Why push someone into the lion’s den when senior pros are sitting out like paid passengers? That kind of counter-balances the brownie points you stand to gain for relenting to the clamour for getting youngsters into the team …”

“So, what the …,” Dhoni paused. Even his placid visage had made way for a frown. “Well, what should I do?”

The MBA frowned in thought.

“Have you considered out of box solutions?”

Dhoni stared blankly. His gaze strayed towards his half open kit bag, out of which an abdomen guard peeped out.

How about Sourav Ganguly?

“Have you considered something drastically different? Sourav Ganguly?”

“To build a team for the future?”

“Well, age is only a number and in some cases it is not advisable to give importance to just numbers.  …  Or, stretching it a bit further, maybe Rajnikanth?”

Unmindfully Dhoni’s fingers were inching towards the bat that lay ominously nearby. The MBA noted this and hastened to change the subject.

“Well, let us take one small step at a time…. so what do you think? We have discussed the pros and cons …”

“Pros? Did we really discuss them? I guess these three formats are playing havoc with my memory…”

“Well, I always play the Devil’s Advocate. That’s easiest to do, and the best possible way to simulate fandom.”

Dhoni looked blankly into the space.

“I don’t know. It seems everything is booby trapped with the most caustic criticism. Not one choice is foolproof. I guess the safest bet is not to play at all …”

The MBA shook his head thoughtfully. “While that will indeed improve the popular record for making an Australian captain wait for the toss, I don’t think it’s the answer. There won’t be a following if there is no team, and the BCCI cannot afford that.”

Dhoni shrugged. “Believe me, buddy, with all the money they have, the BCCI can afford anything. But, tell you what. Let me just go ahead with what I think is the best for the team. Whatever happens after that, win or loss, I will just try to smile my way through the after match circus.”

The MBA puckered his lips in thought. “Hmm … well, that does sound like a good plan.”

Dhoni got up from his chair. “That’s settled then.”

“Yes, that’s the best way. I will document this as my recommendation.”

Dhoni paused. “Recommendation? But, isn’t this exactly what I have been doing all along? In that case, what is your role here? Don’t get me wrong, I am not complaining… if you look at the BCCI, it is full of people with no definite roles …But, I am just a bit confused.”

The MBA chuckled to himself. These cricketers seldom knew how business was conducted.

“I helped you come to a decision that you would have taken anyway. As a highly-paid consultant, that’s what I am supposed to do,” with a smile he offered his hand for a parting handshake .

(Arunabha Sengupta is trained from Indian Statistical Institute as a Statistician. He works as a Process Consultant, but purifies the soul through writing and cricket, often mixing the two into a cleansing cocktail. The author of three novels, he currently resides in the incredibly beautiful, but sadly cricket-ignorant, country of Switzerland. You can know more about him from his author site, his cricket blogs and by following him onTwitter)