Tarot reader Shruti Chopra looks into her cards to give CricketCountry.com readers exclusive insights into what lies ahead in the IPL matches. In the below piece, she dwells into the Royal Challengers Bangalore vs Chennai Super Kings game - the second of the two IPL matches on Wednesday. Tarot reader Shruti Chopra looks into her cards to give CricketCountry.com readers exclusive insights into what lies ahead in the IPL matches. In the below piece, she dwells into the Royal Challengers Bangalore vs Chennai Super Kings game – the second of the two IPL matches on Wednesday.

The Royal Challengers, like the Four of Wands will be stable, focused and ready to put together some new strategies. They may begin to tire fighting the unrelenting Super Kings. Therefore, they may find their soft approach unable to give them results and will begin to attack more – putting their ideas to better use. Overall, they will have a good day in all areas of the game.

Daniel Vettori will be a steady bowler, but will be a little expensive towards the end of his spell. As a captain, he will be better planned but may not be able to command like a captain. Instead, his team will be attentive and will apply the required aggression.

Chris Gayle will build his innings slowly, confidently and will then launch as he has achieved the basics.

AB de Villiers will be consistent, and like the King of Wands will be adaptable and stable.

Virat Kohli, although cautious, will have a better day. Like the Three of Pentacles, he will grow his innings into a confident batting display.

Tillakaratne Dilshan will be another strong batsman today. He will be involved in an important partnership.

Zaheer Khan will remain consistent and content with his bowling effort. The results will give Bangalore further stability.

KP Appanna will have initial problems, but will overcome them quickly, and like the will be intelligent in making the right changes.

The Chennai Super Kings aren’t coming into this game with the best focus. They have a lot to work on if they wish to beat Bangalore today. The Eight of Wands shows their energy and ability to improve their short comings, especially with the High Priestess showing how ready they are to push themselves across the finishing line. Despite their efforts, they may not have the best all round performance. Their bowling and fielding is looking weaker today.

As a captain, Mahendra Singh Dhoni is looking aggressive and attacking, like a hound ready to hunt down the opposition. His batting will be with an aggressive intent and be well controlled.

Suresh Raina, like the Justice card will be balanced, calm and hardworking.

Ravindra Jadeja has the Eight of Cups showing disappointments. He may not live up to expectations today.

Dwyane Bravo will need to work very hard to achieve success, which is looking very difficult. The pressure showing from the Ten of Swords will make it difficult for him to rise up, but luckily, he has the Temperance, which will bring some balance to his play.

Francois du Plessis will have a weak start, but he will be able to adapt himself to play an important innings.

Ravichandran Ashwin may struggle today. The Five of Cups shows his mind set is not positive enough.

Shadab Jakati will be an important bowler today. He is well supported by the balance of the Chariot and the well directed aggression of the Queen of Wands and Emperor.

Although softer in approach, but Bangalore will do the basics well. So it’s advantage Royal Challengers Bangalore. Sachin Tendulkar will have a good day, but things don’t look good for Mumbai 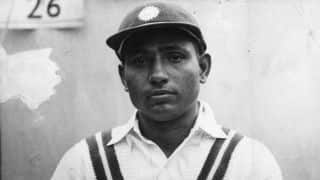