Dinesh Chandimal completed 1,000 runs as a wicketkeeper during his 162 not out against India.

Sri Lankan wicketkeeper Dinesh Chandimal completed 1,000 runs as a wicketkeeper during his 162 not out against India in the first Test at Galle. Bharath Seervi lists wicketkeepers who have taken fewerst innings to complete 1,000 Test runs.

The first Test at Galle against India was undoubtedly Dinesh Chandimal’s best performance till date. He scored a fine century in the third innings to avoid the team from an innings defeat (after a fifty in the first innings). He scored runs at a rapid rate, reaching 50 in 48 balls, 100 in 100 balls and 150 in 161 balls. Not only did Sri Lanka recover after being 5 for 3 and 95 for 5 (trailing by 192), they also took a 175-run lead. Chandimal was stranded on 162 when the tenth wicket fell. Sri Lanka won the Test by 63 runs.

During his 162 not out, Chandimal completed 1,000 Test runs as a wicketkeeper. It was his 22nd innings as wicketkeeper and he reached the milestone when he scored his 110th run. He has played 19 Tests in his career in which he has stood as wicketkeeper in 13. He became the fastest wicketkeeper to score 1,000 Test. Not many were aware of the record. Chandimal broke the record of Kumar Sangakkara and AB de Villiers, who had reached there in 23 innings each. India’s defeat against Sri Lanka at Galle and other defeats following big first-innings

The table below lists the players who scored completed 1000 test runs as wicketkeeper in least number of innings.

Fastest to 1,000 test runs as a wicketkeeper

–          In all 49 players have aggregated over 1,000 runs as wicketkeeper in Tests. Milestones and records to aim for Kumar Sangakkara in his last series before retirement

–          Most players in the above list are from this century, which clearly shows how a wicketkeeper being a good batsman is very important for a side which was the not the case In earlier days.

Let us list the five wicketkeepers who took the most innings to aggregate 1,000 Test runs. The dubious record is held by Wasim Bari, who needed 78 innings to get there (in 1979). Analysis of England’s 100 Test wins by an innings

Slowest to 1000 test runs as a wicketkeeper

Chandimal (58.44) currently has the highest batting average as wicketkeeper among all who scored over 1,000 runs when playing as wicketkeeper. Ashes 2015, 4th Test at Trent Bridge: Statistical report

Andy Flower is the only wicketkeeper who has an average of more than 50 among completed careers (53.70). Adam Gilchrist has scored more runs and centuries than Flower but had an average of 47.60. 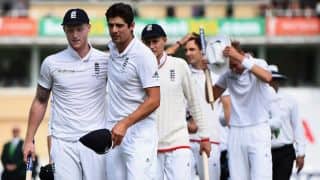 All Muggleton, Dingley Dellers and much more—Charles Dickens and his connections to cricket