In an exclusive chat. Heath Streak opens up on the new World Cup format, Zimbabwe's form in the Qualifiers, his association with Kolkata Knight Riders and of course their new captain and the man of the moment, the "astute" Dinesh Karthik.

Heath Streak is regarded as one of the finest players to play for Zimbabwe. In the three World Cups that he played, twice Zimbabwe have made it to the Super Sixes (1999 and 2003). He has 22 wickets in World Cup and has scored runs at 29.81.

A lot has changed since he last donned the Zimbabwean reds. Zimbabwe have not received a direct qualification to the 2019 World Cup and therefore playing the ongoing ICC World Cup Qualifiers at home. A win against the UAE on Thursday should see them through and that is what coach Streak is hoping for.

Power-hitting and variations with the ball were Streak’s strengths and he could be an asset in Twenty20 cricket. Unfortunately, the format boomed post Streak’s best days. However, the Zimbabwean is amongst the renowned coaches in the shorter format and in the 11th edition of the Indian Premier League (IPL), he will be in the Kolkata Knight Riders (KKR) camp as their bowling coach.

In an exclusive chat with Shuvaditya Bose, Streak opens up on the new World Cup format, Zimbabwe’s form in the Qualifiers, his association with KKR and of course their new captain and the man of the moment, Dinesh Karthik.

CricketCountry (CC): Congratulations on Zimbabwe’s scintillating form in the World Cup qualifiers, but now that Zimbabwe has lost against West Indies, the match against UAE becomes sort of a must-win encounter. Your thoughts on the match?

Heath Streak (HS): Very proud of our performance so far. I m obviously disappointed with our loss against West Indies. It was a close game. Our last game is against the UAE, and yes, it is a must-win game for us. It is a big opportunity for us to win that game. If we play solid cricket, I think we ve got every chance of winning. I hope that we can do that.

CC: Are you a fan of the 10-team World Cup format, given that teams like Afghanistan, West Indies, Zimbabwe and Ireland are all fighting for the two spots, and many good teams will miss the World Cup.

HS: The 10-team World Cup is a pity. Irrespective of who qualifies, there will be 4 or 5 teams who will be very competitive in a World Cup. That s what the World Cup is about, seeing how the new teams feature against the best teams in the world. I think cricket should be growing as a sport. There are more and more competitive sides. Teams which once used to be associates are now getting full international status. It (format of the World Cup) should have stayed the same, or at least a 12-team tournament.

CC: How instrumental do you think were the return of Kyle Jarvis, Solomon Mire and Brendan Taylor behind Zimbabwe’s show?

HS: Definitely, those three have had a massive influence. Solomon Mire played two match-winning roles in the ODIs against Sri Lanka last year, which we won away from home. He scored a 100 and a 70. Brendon Taylor has been outstanding. He has come to form and has got some big scores for us. He brings a lot of experience and leadership to the team. Jarvis too has some really good outings since he has come back. They add some extra experience to the team and give us a lot more depth.

CC: You have played in 3 World Cups yourself. Zimbabwean cricket has seen a low since. Do you think Zimbabwe can regain its lost glory?

HS: A lot of challenges have happened, but we are in a rebuilding phase. Things are looking on the up. Still a lot needs to be done to ensure that we can continue to retain our players. The likes of Gary Ballance, Sean Ervine and Colin de Grandhomme are all born and brought up in Zimbabwe and have spent most of their cricketing careers in Zimbabwe. We have to make sure we don t lose players. We produce some really good cricketers and we still are able to compete against some of the best countries in the world. It needs good planning and support from Zimbabwe Cricket, and hopefully we can get everything right.

HS: In T20s, the bowlers are a lot more defensive with batsmen taking charge on you. So you are looking at how to contain, unless you are looking to exploit a specific weakness of a batsman which you have picked up in analysis. But in general, a defensive mindset works, which is different from the other formats.

CC: Eden Gardens’ re-laid wicket favours the pacers. KKR have got two young U19 pacers in Shivam Mavi and Kamlesh Nagarkoti, who can consistently bowl over 140 kph. They are tipped to play for India. Your thoughts on them?

HS: They two are very promising young bowlers. I ve followed them extensively in the U-19 World Cup. It will be slightly different for them, bowling at international players who are superb. Also, they are not going to play only at Eden Gardens, which favours the seamers, but also bowl in other testing venues. They will be bowling to the likes of Virat Kohlis, who are going to be a different kettle of fish. It will be a great experience for them. They are very young, so I hope they will learn fast and adapt quickly to the pressure of playing in IPL. But they have also got the requisite skills to do exceptionally well for KKR.

CC: Do you think KKR management s decision to appoint Dinesh Karthik as the skipper is a good one? And do you think DK will live up to the huge expectations of the fans?

HS: DK is playing exceptionally good cricket. He is in a very good and confident form at the moment. So, I think it is an excellent decision. He s the kind of a guy who gets along well with everyone. He is very well-spoken and is very astute as a cricketer. So, I m sure he ll do a good job for KKR and will lead the team with really good experience.

(Trivia: Streak played his last two Tests against India. It was back in 2005. Karthik was India’s wicketkeeper in those two Tests)

CC: You were associated with Gujarat Lions. So, you share a good rapport with KKR s new skipper Dinesh Karthik. Do you think that is going to help?

HS: Yes, we share a good rapport. He was a good friend to me during my two years in Gujarat. He loves cricket and loves talking about cricket. I m looking forward to sharing more moments with him. He has been in red hot form in his two years for Gujarat, and I m sure he will continue that form.

CC: In an interview, Karthik has said that with you and Jacques Kallis (head coach of KKR) working side by side, KKR s future is in safe hands. Your thoughts on working with Kallis?

HS: I had the misfortune of playing against Kallis as an opposition. He was a great player, and it feels nice to be on the same side. He is a very calm and collected individual. I m really looking forward to working with Kallis and Simon Katich. It is a great trio and has a lot of experience in it.

CC: KKR fans are excited to have Mitchell Starc as a part of their team. Many cricketers and experts believe that Starc is currently, the best pacer in the world. Do you share the same opinion?

HS: KKR fans are rightly excited to have him, especially in the conditions there at the Eden Gardens. Starcy is definitely up there in the top of the world. His swing upfront will be hugely valuable. We know, in the past, the likes of Steyns and all have had a lot of success. I m excited to be having Starcy in our squad. It s great to have a left-arm pacer who bowls at that speed and at his height, it s really wonderful. It is wonderful to have someone of that stature in our team.

CC: Lastly, is your son Harry, hailing from a family having a history with cricket, interested in the sport?

HS: He is 13-years-old now. He is at school. He loves playing cricket and rugby. 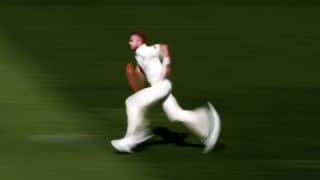