Steven Smith is obviously a phenomenal cricketer and a tremendous batsman in the longer formats, but a T20 World Cup may not have been the best place to experiment with him as captain.

Steven Smith averages 60.18 in Test cricket; that is behind only Don Bradman and Herbert Sutcliffe among all batsmen with at least 3,000 Test runs. Since the start of 2014 he has scored 2,882 runs at an average of just over 80. In this time he has scored runs and more hundreds than any other batsman in world cricket. As for One-Day Internationals (ODIs), Smith currently averages a reasonable 40.03, but since January 2015 that average shoots up to over 50. There is no question that he is among the finest batsmen in world cricket at present. Live Cricket Score: Australia vs Pakistan, ICC T20 World Cup 2016, Match 26 at Mohali

With all that in mind, it made absolutely no sense for the Australian management to ditch Aaron Finch as captain and replace him with Smith. As a result Finch — who was till recently the No. 1 ranked T20I batsman in the world — has also lost his place in the side; not because he does not deserve it but because with Smith in the top order there is simply no place for him. READ: Steven Smith’s world record is fine, but he has a long way to go…

Australia are already hampered by the forced inclusion of Peter Nevill, who is like a fish out of water in T20Is. Nevill has been made to bat as low as No. 10. His wicketkeeping, while steady, is hardly good enough to merit his place in the squad. READ: Australia’s bumpy ride in shortest format

What Smith’s appointment as captain has done is block out a place in the top order that deserves to be booked by Finch. The current line-up reads Usman Khawaja, Shane Watson, Steven Smith, and David Warner, followed by Glenn Maxwell, Mitchell Marsh, and James Faulkner. READ: Steven Smith: The record-making machine

It is not like Smith has great numbers in domestic T20 cricket either. In 130 T20 matches, he has scored 2,319 runs at a disappointing average of 27.28 and a strike rate of 123.35. As far as statistics go, these are ordinary at best. Had Smith not been captain — and perhaps had he not been Smith — he would have been dumped from the team a long time ago. READ: The advantage Joe Root and Kane Williamson have over Virat Kohli and Steven Smith

Smith is obviously a phenomenal cricketer and a tremendous batsman in the longer formats, but a T20 World Cup may not have been the best place to experiment with him as captain. It could make sense for Smith to drop down to No. 5 in order to accommodate Finch in the top order, with Marsh missing out.

Australia have tended to start well in the first six overs before Smith slows them down and makes them lose momentum. That has hurt Australia more often than not, and the problem can be solved quite easily with a shift in the line-up. Smith is a street-smart cricketer who can possibly come in lower in the order and churn the strike around, but he is consuming too many balls at the top.

For now, Finch needs to bat in the top four for Australia. Whether that is at the cost of Smith or Marsh, or someone else entirely, is a different matter. Smith needs to prove himself and earn his spot in the line-up. He has been unable to do that yet. 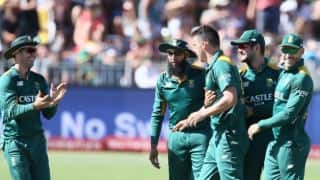 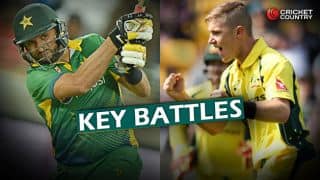