It is a phase when most of the top Test playing all-rounders are struggling to find a potential all-rounder.

The game of cricket, as per the rules, permits with only eleven players each side on-field. It is up to the coach, the selectors and the captain to engage the necessary players depending upon the venue and conditions. While specialised batsmen and bowlers are required to build a strong team, all-rounders are an added bonus. The player comes with the dual benefit of being used both as a batsman and a bowler. While it becomes very hectic for individuals to be a part of tightly packed tours, for an all-rounder, it becomes even tougher as he has to remain active throughout the game. READ: Shakib Al Hasan: Third cricketer to score 100 and take 10 wickets

Talking about all-rounders, names like Garry Sobers, Jacques Kallis, Ian Botham comes to one’s mind. While these men have reached near perfection as far as performances are concerned, very few have managed to inch close to them. However, looking at how the game of cricket is picking up pace, it is now-a-days necessary for every team to have good all-rounders. But do the teams actually have them?

Australia, who are sitting atop the ICC Test rankings currently, surprisingly lack a prominent all-rounder. Australia, though one of the teams to achieve the most in the game, have failed to produce any significant all-rounder over the years, Keith Miller and Alan Davidson being exceptions. While the current squad has Mitchell Marsh in the squad, he has not been a permanent member so far and has made fewer appearances than expected. The team leading the table have batsmen like David Warner and Steven Smith but no genuine all-rounder. They have rested a lot of hopes on Marsh.

The next team in the ICC Test ranking is India. India is the land of Kapil Dev and Vinoo Mankad but after Kapil, no other name can be considered who took their game up to that mark, at least in Tests. The current Indian team has been long searching all-rounders and Ravindra Jadeja and Stuart Binny but the two are yet to make any mark. While Ravichandran Ashwin, ICC No. 1 ranked all-rounder has not been consistent outside subcontinent.

The Pakistan team, let aside the need of an all-rounder, need a sorted line-up in the first place. Struggling through their rebuilding phase, Pakistan hardly have any player who has been consistently performing for the past few years and are expected to serve the country. Pakistan has produced Imran Khan, one of the finest all-rounders the world has ever seen but currently needs to reconstruct the entire line-up. Had action not been an issue, Mohammad Hafeez would have been an asset.

The England Test squad currently looks to be better with two potential all-rounders. Moeen Ali, who bats in the lower-middle-order, adds decent last moment runs beside scalping wickets. Moeen’s strike rate in Tests is 47.35 in 23 matches while he has bagged 64 wickets. On the other side is Ben Stokes, who, in the same number of matches, has acquired 57 wickets and has scored with a strike rate of 70.74.

New Zealand, who follow England in ICC Test rankings, also do not have many Test all-rounders in the current squad. The only name that comes to one’s mind is Correy Anderson, who can more be considered as a batting all-rounder, with a Test strike rate of 56.86 and has 16 wickets from the 13 matches he played.

South Africa, the hub of all-round cricketers, have a number of all-rounders in the squad who have failed to maintain consistency. Jean-Paul Duminy is the first name in the list. Duminy, who had a great start to his Test career, was not able to be consistent. The player has had a better First-Class season, which leaves his followers hoping for good performances in Test in future. Vernon Philander has had a similar case while it will be Chris Morris, who has displayed good all-round performances recently but first he will have to cement a permanent place in the Test XI.

While the top six Test teams do not include many quality all-rounders, it is West Indies who have Carlos Brathwaite. Brathwaite made his Test debut last year, playing a couple of Tests gathered 130 runs but bagged a wicket. What looks impressive is the way he is playing. A name that needs a mention in the list is Angelo Mathews. Besides leading the team, Mathews is one dependable bowler for the team while the pillar of middle-order batting. But one guy who wins the battle hands down is Shakib Al Hasan. With a Test strike rate of 61.14 and 147 wickets in 42 matches, Shakib is for certain reasons the best Test all-rounder currently.

Cricket is evolving every day, with improvisation in every department but the bottom line remains the same, most of the top Test playing nations are struggling to find a potential all-rounder. 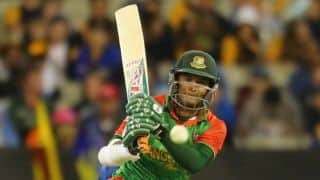