While the world knows all about the greatest cricketer the world has seen, re-living Bradman trivia is probably still an exercise.

I briefly toyed with the idea of writing an eye-catching headline and the customary couple of paragraphs at the beginning of this piece, but realised quickly that introducing Don Bradman was an exercise in futility. The number 99.94 is so phenomenal, astounding, intimidating, and awe-inspiring at the same time that the mind refuses to think beyond it. While the world knows all about the greatest cricketer the world has seen, re-living Bradman trivia is probably still an exercise. Let us have a look.

Lina Morfitt s 2003 book Emanuel Danero (Neich): Italy to Australia revealed an amazing piece of information: born in Genoa in 1807, Danero migrated from Italy to Australia in 1826, and was one of the first Italians to do so. A successful hotelier, Emanuel was a champion at quoits and skittles.

To quote The Sydney Morning Herald: He had actually thought he was en route for Holland, not New Holland, according to the essay, but upon arriving in Australia he liked what he saw and stayed . He also married Mary Corner, daughter of a convict called James. They had 14 children. After Mary s death Neich married Maryann Parkinson, and had 10 more children.

However, Emanuel was not exactly the most loyal of men. According to Immigration Place (Australia) he had another daughter (Sophia Neich) with Mary Cupitt while still married to Mary Corner (I will skip the ‘Mary’ jokes cramming my brain, for Bradman is serious business).

Sophia went on to marry William Whatman. Their sixth child, Emily, married one George Bradman and gave birth to the greatest cricketer ever lived.

As if Italian ancestry is not sufficient! John and Lucy (n e Rawlinson) Bradnam were Bradman s other set of grandparents. Charles Williams Bradman provides evidence to this, as does Michael Wood s works on wargs.com. John and Lucy were both registered as Bradnam during their respective deaths.

Why was their son called Charles Andrew Bradman (and not Bradnam)? Williams explains: The variant in the spelling of the baby s surname should not be a matter for surprise most of the villagers were illiterate and even the church [Withersfield, in this case] authorities made muddles from time to time … Charles brother was recorded as a Bradnam, so the whole thing was probably a mistake. But mistake or not, Bradman it was.

Charles married Elizabeth Biffin, who gave birth to George. The rest, as they say, is history.

[Note: The change of surname in the Bradnam/Bradman family did not end with Charles. John, The Don s son, changed his last name to Bradsen to avoid unnecessary attention. He later reverted to Bradman.]

While several cricketers (Vinoo Mankad and Bernard Bosanquet, for example) have lent their names to the lexicon of the sport, but as in many other aspects, few have matched The Don. The word Bradmanesque had made it to English language. Collins English Dictionary defines the word thus:

Bradmanesque (adjective): (of a batsman or innings) reminiscent of Sir Don Bradman in terms of dominance over the opposing bowlers.

When Miles Mander made (mind the alliteration) The Flying Doctor in 1936, Bradman was offered a role. The movie starred Charles Farrell (playing Sandy Nelson) and Mary Maguire (Jenny Rutherford). Sandy got involved in a fight during a cricket match and was sentenced to prison.

Bradman signed the contract with National Productions Ltd on January 22, 1936. The Sydney Morning Herald reported: He will take part in some scenes dealing with a cricket match, and will be photographed in action on the field .

It remains the only full-length feature film to boast of a Bradman appearance. The movie was not a successful one, but as expected, is an oft-asked question in cricket quizzes around the world.

The Great Depression had an effect as profound on Australia as anywhere else. When they reached England in 1930 with the aim of reclaiming the urn, Bradman came into his element, scoring 974 in the series a record that still stands.

Jack O Hagan wrote a song Our Don Bradman during the tour. It was performed by Len Maurice aka Art Leonard and recorded in 1930. The lyrics ran thus:

Who is it that all Australia raves about?

Who has won our very highest praise?

Now is it Amy Johnson, or little Mickey Mouse?

No! it’s just a country lad who’s bringing down the house.

And he’s Our Don Bradman and I ask you is he any good?

It is well-documented that Bradman never set foot on Indian soil; neither did he play India till 1947-48. However, during their Ashes tour of 1930, the Australians played Club Cricket Conference a side that included Indian all-rounder Nazir Ali.

Nazir Ali dropped Bradman on four, but after the great man reached 70 in 75 minutes, he had his revenge, having The Don caught by FE Whitehead. ALSO READ: Nazir Ali becomes first Indian to dismiss Don Bradman

To leave no stone unturned when it came to understanding the rules of the sport, Bradman passed the umpiring test conducted by New South Wales Cricket Association on August 2, 1933.He thus became a fully qualified umpire . However, he never umpired at First-Class level.

During the last of these matches, for South Australia (SA) against New South Wales (NSW) at SCG, Bradman kept wickets for the only time in his First-Class career. He also took a catch in the first innings, that of Albert Cheetham (nephew of Hammy Love, though not related to Jack Cheetham), off Clarrie Grimmett.

Austria enjoys merely an Affiliate status in ICC, but when it came to honouring Bradman, they did something few others could emulate. Lauda Air (now Austrian Airlines) named a Boeing 777-2Z9 aircraft (delivered March 28, 2002) Sir Donald Bradman . It took a Vienna-Sydney-Melbourne route.

Bradman was not the only one: Lauda Air also had aircrafts named after Pablo Picasso, Elvis Presley, and Ernest Hemingway.

While the dahlia named after Bradman is famous, Sir Donald Bradman Rose is not that well-known. A Meilland International SA breed, the variety was coined in June 2002. Garden Express wrote about the breed: Sir Donald Bradman is a beautiful deep red rose. Exceptionally large blooms with a heavy fragrance. Long stems make this variety an ideal cut flower and excellent vase rose.”

February 24, 1944. The Allies were supposed to attack Monte Cassino, Italy (no, this does not have anything to do with his Italian ancestor). All the infantry waited for was a signal: BRADMAN BATTING TOMORROW. Unfortunately, the weather refused to improve, and all they got was a disappointing BRADMAN NOT BATTING.

Nearly three weeks passed. Then the Allies decoded the Morse Code: the long-awaited news of Bradman s batsmanship had arrived. The assault started at 8.30 AM, lasted till noon, and with 750 tons of 1,500-pound bombs, backed by the 746-artillery piece by New Zealanders, started off the Third Battle of Monte Cassino. But that is another story.

On December 9, 1931, Cooktown Independent came up with a spectacular news: Australia today mourns the loss of the greatest batsman the world has ever seen. During the progress of the Test match at Brisbane, Australia vs South Africa, Don Bradman was attacked with dysentery, to which he succumbed on Saturday. They were referring to December 5.

The Test in question took place from November 27 to December 3: Bradman slammed 226 in a team score of 450 (they scored 348 during his stay at the crease) before Bert Ironmonger, with match figures of 77-45-84-9, led Australia to an innings victory.

Bradman s last recorded match was on February 6, 1963, for Australia Prime Minister s XI against a full-strength MCC in Canberra. After Ted Dexter declared on 253 for 7, Bradman demoted himself, finally emerging at 108 for 3 to join a young politician of the Liberal Party called Don Chipp.

The Canberra Times described the innings vividly: Clapped all the way to the wicket with the MCC players joining in, he gave the crowd a brief but treasured look at the Bradman of old.A smashing off-drive for four was his only scoring stroke before he was unlucky to play a ball on to his stumps off fast bowler Brian Statham … Sir Donald had enjoyed his short stay. His face was wreathed in smiles as he made his way in to the pavilion which was named in his honour just before the match started.

Earlier that day, Bradman, standing at slip, chased a ball with all his old spirit towards the ropes. He eventually stopped the ball, but decided against the throw once he saw Neil Harvey just behind him: the relay throw did the trick, and the 11,000-strong Manuka Oval crowd broke into applause.

Chipp followed shortly afterwards, and the hosts lost by 3 runs. Fourteen years after the match Chipp became the inaugural leader of Australian Democrats.

Though golf was his second sport, Bradman was also an avid squash player. He wrote in a 1939 article on The Squash Rackets Annual: I play squash because it is marvellous training for cricket. it Improves footwork, poise,balance and suppleness, and develops ball sense. It is great training for the eyesight.

On August 18 the same year, Bradman beat tennis star Don Turnbull to win the Amateur Squash Rackets Championship of SA. After losing the first two sets 0-9, 4-9 he came back strongly to win the last three 10-8, 9-3, 10-8 (he was down 5-8 in the final set) to clinch the title.

While Bradman Museum of Bowral is known to all, the somewhat curious Bradman Birthplace Museum of Cootamundra is not. Emily Bradman had travelled from Yeo Yeo to 89 Adams Street, the residence (and workplace) of Eliza Granny Scholz, a renowned midwife of Cootamundra, just before delivering her famous son.

Cootamundra Shire Council did the necessary restorations, and from October 23, 1992, the house is home to Bradman Birthplace Museum (and is accompanied by a neighbouring Memorabilia Cottage). It is ranked #1 on a Top Things to do in Cootamundra list by TripAdvisor.

A fast-medium bowler who obtained prodigious movement in the air (and an opening batsman to boot), Charles William Terry Charlie MacGill played 6 First-Class matches over 12 seasons.

Playing for Western Australia (WA) at WACA in 1939-40, MacGill bowled an excellent opening spell against SA. Batting at No. 3, Bradman batted beautifully to reach 42 before he edged one off MacGill: the ball landed in the big gloves of Oswald Lovelock. It was perhaps the greatest moment of MacGill s career.

Charlie was not the only MacGill to play First-Class cricket. His son Terence Mornington David Terry bowled leg-breaks for WA. Terry s son Stuart Charles Glyndwr bowled leg-breaks as well; he moved from WA to NSW, and was easily the greatest cricketer of the MacGill clan. He finished with 208 Test wickets at 29. ALSO READ: Don Bradman dismissed by Stuart MacGill s grandfather

Harold Vincent Burns was a Queensland wicketkeeper who played a 5 First-Class matches without much success. However, it was during a non-First-Class match that Burns had his biggest achievement.

On a tour of Queensland, NSW played a match at Cairns in March 1931. It was a no-contest, for NSW boasted of Alan Kippax, Alan Fairfax, Stan McCabe, Archie Jackson (playing one of his last matches), and already the most prolific batsman in contemporary cricket Bradman.

Well before the NSW innings started, Bradman, asked to bowl his leg-breaks, ran through Cairns with 4 for 13 as the hosts were bowled out for 148. He then went on to slam 90 in 45 minutes before edging one off Olsen, and Burns took the most precious victim of his career.

Harold s great-nephew Joseph Antony Burns has had a more prolific career. At the time of writing this article, Burns has played 60 First-Class matches, and 2 Tests.

Note: Perhaps peeved at not getting to his hundred, Bradman routed Cairns with 6 for 43. Cairns slumped to an innings defeat. However, it was decided that Kippax XI would bat on to entertain the crowd. Bradman opened and scored 103. 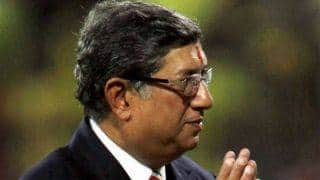