Don Bradman — even if every chance he ever gave in his career was accepted, he would still remain head and shoulders above the others

Don Bradman — even if every chance he ever gave in his career was accepted, he would still remain head and

Don Bradman would've been one of the best despite being denied a second chance.

Lives, or chances not taken, play a huge role in the career of any batsman. But, it is not that important if one is Don Bradman. Arunabha Sengupta crunches numbers to find that even if every opportunity given by Bradman were accepted, even if he did not get even one life in his career, he would still loom head and shoulders above the others.

The role of chance

The little Indian wicketkeeper had dropped a sitter off Sanjeev Sharma when Graham Gooch was on just 36. He now spent close to 10 hours, castigating himself, before a Manoj Prabhakar delivery rattled the stumps of the England captain. Gooch raised his bat as he walked back for 333.

Let us forget that psychological boost provided by the dropped catch, the run-of-the-mill pages turned to reveal a prolonged chapter inscribed on golden folio. (Gooch, who had scored 5158 runs at 37.92 till then as a talented but underperforming batsman, went on to hit 3742 more at 51.37, thus reinventing his career).

If we just assume that all the other innings would have remained just the same, that one catch would have brought Gooch’s career Test average down from 42.58 to 41.16.

One single missed opportunity can have a huge bearing in a career.  Now just consider if all the other chances Gooch had offered through his playing days had been accepted. What would his career figures have looked like?

Let us take another example. If Chris Scott, the Durham stumper, had pouched Brian Lara at 18, the great man’s First Class record would have seen 483 less runs at the cost of one additional completed innings. The 501 would have remained unscored.

If we assume the rest of the career would have panned out in the same way for the West Indian legend, his First-Class average would have come down from 51.88 to 50.64.

These were, of course, hugely expensive drops. But, during a long career, every batsman enjoys plenty of missed chances. That is what makes a chanceless hundred an exception rather than the rule. What if all the opportunities ever offered had been taken?

On March 7, 1971, if Garry Sobers had accepted the snick off Vanburn Holder at first slip, Sunil Gavaskar’s first Test innings would have amounted to a mere eight and not the impressive 65. At Georgetown in the following Test, the ‘Little Master’ scored 116 in the first innings, establishing himself as the long serving run machine of India. By the time he had reached 35, he had been dropped twice, and twice more during the rest of his innings. In the fifth Test at Port-of-Spain, he was dropped at four in the first innings and went on to hit 124.

Gavaskar’s 774 run debut series at an average of 154.80 would have read a lot less remarkable if these chances were held.

We must not begrudge batsmen these strokes of luck. It is the hallmark of the greats to capitalise on gifts and opportunities and make it big.

Sachin Tendulkar’s maiden Test hundred at Manchester saw him being put down by Eddie Hemmings when he was 10. Lara was dropped twice on his way to his celebrated 153 not out which won West Indies the Test by one wicket against Australia in 1999. Kevin Pietersen’s defining hundred would not have taken place if Shane Warne had caught him at The Oval in 2005 before he had settled down.

If we go further back in history, we have famous instances such as Arthur Carr dropping Charlie Macartney in the slip at zero and “The Governor-General” going on to hit a century before lunch.

If all catches that were offered had been held, career statistics of every batsman would have been very different. It can perhaps be shown, after sufficient study, that no batsman would have averaged more than 50 if every innings had come to a conclusion at the first offered opportunity. Not even 45 perhaps. Few would have managed 40.

Well, there is obviously one exception. And the name is, without surprises, Don Bradman.

A measure of The Don’s greatness

Thanks to BJ Wakley’s monumental analysis of Bradman’s career, we have the details of exactly what would have taken place if each and every chance offered by Bradman had been accepted.

[Note:Please bear in mind that the following does not take into account the change of match situations because of an accepted opportunity. It purely concentrates on the batsman.]

During the course of his 52 Test matches, Bradman gave 24 chances that were not taken. Yes, Bradman’s catches had been spilled or stumping opportunities had been muffed on 24 occasions: 24 instances of unforgivable lapses.

In 13 innings he gave a single chance, in two he was given two lives each, in one three and in the course of a special one four.

Of his 29 hundreds, ten included at least one chance. And of these ten, two lives were granted after he had passed three figures. Hence, even if every opportunity given by Bradman had been accepted, he would have still ended with 21 hundreds from his 52 Tests.

That would have seen him ending his career with an average of 74.49. Even if every other batsman in the world till today had enjoyed all their gifted lives and Bradman had not been granted a single one, he would have still ended up head and shoulders above the rest of the field. And if we do consider the same conditions for the other batsmen, I daresay we may find him even bigger a colossus in comparison.

If we carry out the same exercise for First-Class cricket, we find Bradman gave 93 unaccepted chances in all — in 69 of his 388 innings. 43 of these innings were hundreds, and of them 20 were chanceless until he had reached his century.

So, 94 of the 117 hundreds would still have been completed. Due to the lack of exact data, we have to carry out an approximation which tells us that about 4,400 of his runs were obtained after offering chances. His highest score would remain 452 not out. That innings was chanceless.

Hence, if Bradman had indeed been out at every first blemish all through his career, he would have scored 23,667 runs with 94 hundreds in 234 matches, at an average of 77.92. He would still be ahead of the next best in First-Class cricket by a good margin — Vijay Merchant, all lives intact, averaged 71.64, and we are not considering the chances dropped off him (which is unfair, given the standard of Indian fielding during the run-fest in Indian domestic cricket in the early 1940s — the era in which Merchant had thrived).

We can take away the defining, indispensable hand of chance that aids every batsman in some innings or the other, banish it outside the record books and leave Bradman the batsman to battle fate alone, with only his willow. Even then, he emerges ahead of the rest of his fellow men.

The absolute superiority of Bradman lies beyond the realm of chance and fate. 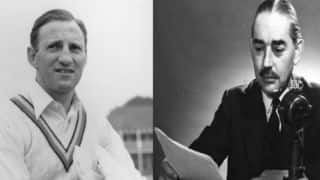 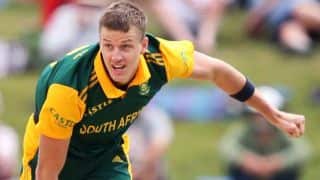