September 10, 1948. Don Bradman ended his final innings in England by plundering 153 against HD Leveson Gower’s XI at Scarborough. Arunabha Sengupta looks back at the day that the scourge of Bradman was finally lifted from the fortunes of English cricket.

The unbelievable journey finally came to an end in Scarborough. Runs had been amassed in quantities never matched before or since, hundreds had been notched up almost as a force of habit. It had been one great gala display of magical fireworks for 18 years since the 21-year-old Don Bradman had landed in England for the first time in the summer of 1930. And now, quite appropriately, this most glorious of lights went out in the match termed ‘festival’ —against HD Leveson Gower’s XI at Scarborough.

The traditional end of season game had been rendered controversial since 1934. This was mainly because the hyphenated patron kept selecting a near-Test team for what was supposed to be a light hearted affair. This 1948 side accordingly featured Len Hutton, Bill Edrich, Norman Yardley, Walter Robins, Freddie Brown, Godfrey Evans, Alec Bedser and Jim Laker — apart from the prolific New Zealander Martin Donnelly. For all intents and purposes, it was an unofficial sixth ‘Test’. And Bradman, eager to maintain a clean slate in his farewell tour, selected his fittest eleven.

Hence, after rain had washed out most of the first day, the formidable home side ended up facing Ray Lindwall at his peak, and Hutton was back in the hutch before a run graced the board. The fast bowler proceeded to take 6 for 59, even those figures not quite a true reflection of his menace that day. Laurie Fishlock got 38, Donnelly 36, Yardley 34. The rest of the batting collapsed against his pace, aided by the off-spin of Ian Johnson.

During the lunch interval of the first day, the Yorkshire County Cricket Club announced that Bradman had been made a life member — the highest honour a foreign player could be awarded. However, when Australia bowled it was apparent that Bradman, though honoured, was not about to give any quarter in exchange.

By the time the visitors batted late in the second day after bowling the opposition out for 177, rain had ensured the improbability of a result. Yet, there was no lack of purpose in the way Sidney Barnes and Arthur Morris approached their task.

The score stood at 102, and it was 36 minutes from close, when Yardley bowled Morris for 62. In walked the legend, clapped all the way to the wicket by the Yorkshire crowd. By stumps he was unbeaten on 30.

The following day dawned cheery and bright and 17,000 spectators flocked to the ground to witness the master’s final act. The welcome for the hero was loud and heart-warming. Bradman had to be escorted to the wicket by two big, burly policemen. And then he settled down.

The wicket was easier than the day before. Bradman stroked the ball mildly at first, bringing up his 50 in 91 minutes. The strokes became more frequent and unstoppable from then on. His next 50 hastened forth at a run a minute. That marked the eleventh century of the tour, 41st in the country. The bat was raised briefly, and then it was back to business. Warwick Armstrong’s men of 1921 had lost the final two matches after an impeccable tour. Bradman had ensured beyond doubt that his team would not suffer any such reversal.

His job done, he proceeded to give the crowd something to remember. Unbeaten at 109 at lunch, he proceeded to add 44 in 38 minutes after the interval, singling out Bedser for some rough treatment. The Surrey bowler had given him some tough times on the tour, getting him dismissed in the leg slip, caught by Hutton on multiple occasions. Bradman proceeded to blast him for a flurry of boundaries. And when he reached 150, the final stroke carrying him to 153, he decided to leave the stage.

It was once again caught Hutton bowled Bedser, but this time not at leg slip. Bradman skied the ball into cover, and Hutton got under it. Before the catch was taken, while the ball was still gaining height, the legend turned, took off his cap and ran full tilt for the pavilion. By the time the cherry had landed in Hutton’s hands, he was already halfway towards the boundary.

Jack Fingleton wrote, “He continued running, bat, gloves, cap and bat fluttering from his hands, and almost before this huge Yorkshire crowd at the Scarborough Festival had had time to warm its hands in appreciation to him, Bradman was lost to view forever as a First-Class batsman on an English ground.”

Thus ended the saga of 9,837 runs at 96.44. A sleepy Lindsay Hassett greeted him on arrival in the dressing room. “What happened?” he yawned. “Did you throw it away?”

Bradman smiled. “Well, I worked it out that to average 100 in England I’d have had to make about 500 not out — and this game, as you know, is limited to three days.”

Thus ended the Bradman era, as Plum Warner put it. English cricket was finally free from the huge shadow of the great man.

Barnes got 151, and Australia declared at 489 for 8. There remained time for just a few overs and England finished at 75 for 2. The last over of the match was bowled by Bradman himself, and was met with great ovation.

The tour ended with 23 wins and nine draws for the Australians. As many as 15 of the victories had been achieved by an innings. The closest result had been a win by four wickets.

“Tell me, Mr Ferguson,” asked His Majesty, “do you use an adding machine when the Don comes to bat?” 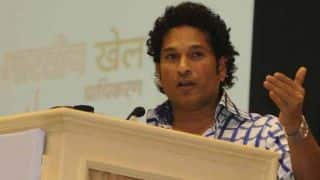 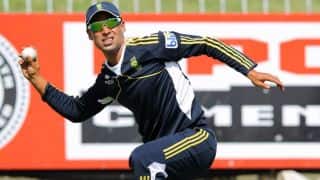