Don’t say AB de Villiers had not warned you!

Don’t say AB de Villiers had not warned you!

AB de Villiers shocked the world by reaching 50 from 16 and 100 from 31 balls (both world records) before eventually falling for a near-ridiculous 149 off 44 deliveries in the second One-Day International (ODI) of the series against West Indies at New Wanderers, Johannesburg. It sounds more remarkable that he had not even batted for an hour, and during his 67-ball stay at the crease, South Africa had amassed an outrageous 192. No, there is no typo involved there. Click here to see a list of records created today

In fact, de Villiers batted in such fashion that Hashim Amla (153 not out from 142) and Riley Rossouw (128 from 115) paled in comparison. Towards the end it seemed that de Villiers (and South Africa) would shatter a new record every ball, and it came as a surprise when they failed to overhaul Sri Lanka’s record score of 443. They needed a mere five off the last three balls but did not manage a single run. Click here for the live scorecard and ball-by-ball commentary of the match

What is more incredible is the fact that de Villiers had as good as warned the world of cricket before the series with an ominous tweet that sounded like an innocuous New Year’s wish: “Ready to take on 2015. Have a blessed year everyone.” How foolish we were to think that it was one of those polite wishes! Click here to read an account of Corey Anderson’s 36-ball 100 Johannesburg is not new to such spectacles; they had witnessed 435 being chased down in an ODI (a record that still stands; Australia had set a new record of 434 earlier that day), and a week back they had seen West Indies chase down a world record 232 in a Twenty20 International (T20I). On a side note, Jerome Taylor (10-0-95-1) and Jason Holder (9-0-91-1) are now ranked first and second respectively in terms of most runs conceded by West Indians in ODIs. 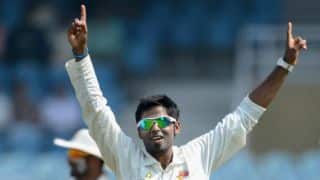