Now, let us look at the most iconic ducks in the history of the sport.

After the first three parts of ducks in cricket it is time to move on to the fourth. Abhishek Mukherjee looks at the most iconic ducks in the history of the sport.

The first part had dealt with the most talked-about streaks of ducks; the second, with scorecards full of ducks; and in the previous version the readers had become acquainted with random trivia regarding ducks in the sport. This part of the series will deal with the most famous ducks in the history of cricket.

Note: Do not be surprised if you come across Don Bradman’s name multiple times on the list. His ducks often made front-page headlines.

Despite his sound wicketkeeping, Tommy Ward is usually remembered for his king’s pair on Test debut. It is certainly not the only king’s pair in history, but there is a touch of uniqueness about it. Ward had made his debut at the Old Trafford Test during the first ever triangular tournament in the history of Test cricket in 1912.

Australia amassed 448, and Ward’s chance to bat came when South Africa were down at 265 for 9 on Day Two; Jimmy Matthews had snared Rolland Beaumont and Sid Pegler in the previous two deliveries, and was on a hat-trick when poor Ward walked out to bat. He was leg-before first ball.

Syd Gregory enforced the follow-on, and this time the South Africans reached 70 for 4. Then Gordon White fell, and Matthews took over: he removed Herbie Taylor and Reggie Schwarz in consecutive deliveries, and for whatever reason, Frank Mitchell promoted Ward to nine — ahead of Beaumont and Pegler — once again after Matthews had taken two in two.

It was too much an ask for Ward, who was never a great batsman. He hit one back to Matthews first ball and returned to the pavilion. Ward thus scored a king pair, becoming the third wicket of Matthews’ twin hat-tricks — all on the same day. Take that for a feat!

2. The day when knitting got priority over a batting career

Following an excellent domestic season and Charlie Macartney’s injury, Dr Roy Park was selected for the MCG Test in the 1920-21 Ashes. He was scheduled to come in at three and watched Herbie Collins and Warren Bardsley put up 116 at a brisk pace. Then, after Harry Howell removed Collins, it was finally Dr Park’s turn to bat.

It was the moment Dr Park had always dreamed of. His wife was there, at the pavilion, knitting away to glory. Dr Park walked out, took guard, and waited for Howell. As the bowler ran in to bowl, Mrs Park dropped her knitting; by the time she picked it up and returned to her original posture, her husband had been clean bowled by Howell for a golden duck.

Australia won the Test by an innings, and given the strength of the Australian side of the era, Dr Park never played another Test. Mrs Park thus ended up missing her husband’s entire Test batting career because she had dropped her knitting.

3. The aborigine who cleaned up The Don

Long before Michael Holding came with his artillery against Geoff Boycott, there was a little aborigine called Eddie Gilbert. All of a mere 1.7 metres and 57 kg who had suddenly made a name for being the fastest bowler in the country. Some claim that he had a suspect action, but the over from hell that he produced for Queensland against New South Wales (NSW) is not something historians are likely to forget.

Bradman, a year-and-a-half since his famous Ashes tour of 1930, had already been hailed as the greatest in contemporary cricket. After Gordon Amos skittled out Queensland for 109, Jack Fingleton safely negotiated the first over from “Pud” Thurlow. Then Francis Gough summoned Gilbert.

Poor Wendell Bill could only protect his throat by instinct as the ball kissed his gloves and went to the wicketkeeper. Bradman stored out, and the crowd waited in eager anticipation to witness a much-anticipated duel.

It was evident that Gilbert was faster than what Bradman had expected him to be. The great man was pushed back, but he still managed to keep out the first ball he faced. The second one could have been an encore of the one bowled to Bill, but it was a bit wayward and Bradman could let it go past leg-stump. The third one beat Bradman’s bat and thudded into the big gloves behind him.

The next one really took off, hitting Bradman on his belly, leaving him gasping for breath; his bat was knocked out of his hand. It took him some time resume batting. It was something the spectators had not anticipated: their hero was felled by the unheralded fast bowler. Will he recover from the blow?

When he eventually did, Gilbert produced an encore; Bradman tried to counterattack, but the resultant top-edge landed in the wicketkeeper’s gloves. The mighty hath fallen. Bradman later recovered: “The keeper took the ball over his head, and I reckon it was halfway to the boundary.” He also admitted that those five balls were “were unhesitatingly faster than anything seen from Larwood or anyone else.”

It is common knowledge that Bradman had missed the first Test of the Bodyline series at SCG for multiple reasons. England had won the Test easily, and when news got out that Bill Woodfull had decided to bat at MCG, crowd started pouring in. Australia lost Fingleton early, and after putting up a gamely fight Leo O’Brien perished as well.

There was a huge cheer as Bradman walked out. The cheer intensified, and Bradman took a long semicircular route, waiting for the applause to subside and get accustomed to the light himself. He reached at the centre, took guard, and waited for the bespectacled Bill Bowes to run in.

Bradman had probably anticipated a bouncer and had committed himself to the pull; it was only later that he would realise that it was pitched on a good-length delivery; he tried to adjust his stroke, but alas, he was too late; the ball took a faint edge and crashed on to the stumps, leaving the huge amphitheatre in stunned silence.

Bowes later recalled: “The crowd was stupefied. Bradman walked off the field amid a silence that would have been a theatrical producer’s triumph. The spell was broken by a solitary woman’s clapping. The feeble sound rippled above the hushed throng, and then an excited chatter broke out from all parts of the ground. And it was then that I noticed Jardine. Jardine, the sphinx, had forgotten himself for the one and only time in his cricketing life. In his sheer delight at this unexpected stroke of luck, he had clasped both his hands above his head and was jigging around like an Indian doing a war dance.”

From the Bodyline Television series, 1984

So much has been said about Bradman’s last Test innings that it seems almost futile to narrate them again. Quoting John Arlott, perhaps the most fitting man to be behind the microphone during that innings, is the easier option:

“Well, I don’t think I’m as deadly as you are, Rex, I don’t expect to get a wicket. But it’s rather good to be here when Don Bradman comes in to bat in his last Test. And now, here’s Hollies to bowl to him from the Vauxhall End. He bowls, Bradman goes back across his wicket, pushes the ball gently in the direction of the Houses of Parliament, which are out beyond mid-off. It doesn’t go that far as that, merely goes to Watkins in the silly mid-off. No run, still 117 for 1. Two slips, a silly mid-off, and a forward short leg close to him as Hollies pitches the ball up slowly and… he’s bowled… Bradman bowled Hollies… nought… and what do you say under these circumstances? I wonder if you see the ball very clearly in your last Test in England, on a ground where you’ve played some of the biggest cricket in your life and where the opposing side has just stood round you and given you three cheers and the crowd has clapped you all the way to the wicket. I wonder if you see the ball at all.”

7. The greatest ODI anticlimax ever


When ODIs came into being it was nobody’s guess that Garry Sobers, though past his peak, would make it big in the format. When he eventually played the first ODI against England at Headingley on the 1973 tour, there was eager anticipation to witness how the man who hit six sixes in an over would perform.

He walked out with West Indies trouble at 132 for 4; he saw the Bob Willis over cautiously, and treated Chris Old with respect as well. Then it happened: he edged the sixth ball he faced to Bob Taylor off Old. West Indies lost the humdinger by a solitary wicket, and — despite the immense effect he could have had on the sport — Sobers never played another ODI.

8. The bowler’s Holding, the batsman Boycotts

It was the Kensington Oval fortress yet again — this time with four ruthless fast bowlers to protect it. England had started well, bowling out the hosts for 298; England had managed a mere 6 — none of them off Boycs’ bat — when Holding commenced one of the most famous overs in history.

The first ball hit Boycott on the gloves and fell barely short of second-slip. The next whizzed past his bat. The third came in, thudding into his thigh. The fourth and fifth were let down at rip-roaring pace, and it took someone of Boycott’s ability to put bat to them.

Boycott later said that the last ball from Holding “went like a rocket”: it crashed on to the stumps, ending Boycott’s agony. Few overs have been as lethal.

After the rampage in the league match The Singer Cup at Singapore the final was supposed to be a cakewalk, and it was indeed headed that way once Sanath Jayasuriya went on a rampage following Pakistan’s 215 all out. Sri Lanka lost Romesh Kaluwitharana, Jayasuriya’s partner-in-crime on many an occasion in 1996, for a duck.

There is nothing unusual about an opener scoring a duck, especially one who is known for going hammer-and-tongs at bowlers; it was just that the team score was 70 in 5.2 overs with the Matara Marauder on 66 (having already set a new world record for the fastest ODI fifty) and four extras.

New Zealand required 102 to avoid the follow-on when Geoff Allott walked out to join Chris Harris at Eden Park. Allan Donald and Shaun Pollock had been brilliant, and it seemed to be only a matter of time when they would push Allott (who finished with 44 runs and 71 wickets at international level) aside and get the hosts to follow-on.

Allott was eventually dismissed by Jacques Kallis; he did score a duck, though he helped Harris to add 32 for the last wicket: does not seem much to write home about; barring the fact that Allott had seen off 77 balls and had hung around for 101 minutes. “It was the best duck I’ll ever make”, he later confessed.

The spectators applauded every time Allott defended a ball, and as he went past Godfrey Evans’ world record (he had remained scoreless for 97 minutes, but had eventually managed to get off the mark) the cheer was louder than the one Daryll Cullinan had received when he had set a new South African record of 275 not out. Allott’s effort remains the longest duck of all time. 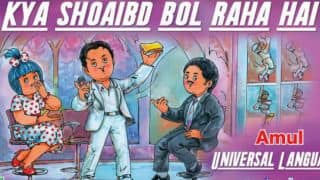