Coach Duncan Fletcher received a lot of flak as India struggled post the 2011 World Cup. In fact, his contract extension was a major surprise. However, a few months down the line he has vindicated himself. Nishad Pai Vaidya writes about the challenges that lies ahead for the taciturn coach. 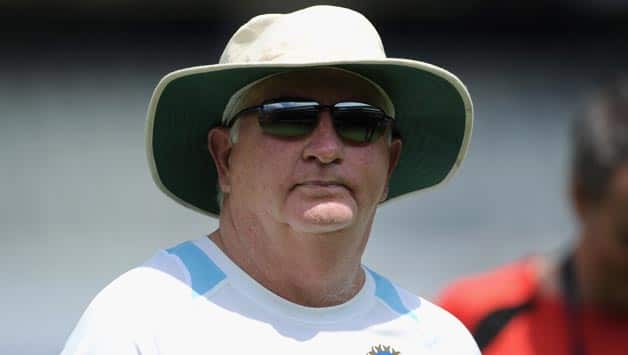 Coach Duncan Fletcher received a lot of flak as India struggled post the 2011 World Cup. In fact, his contract extension was a major surprise. However, a few months down the line he has vindicated himself. Nishad Pai Vaidya writes about the challenges that lies ahead for the taciturn coach.

When the Board of Control for Cricket in India (BCCI) extended coach Duncan Fletcher’s contract by a year on March 15, 2013, the move was met with surprise and astonishment. Up until then, India had won nine and lost 10 out of the 23 Test matches under him as his tenure had seen them humiliated in England and Australia — not to forget the home series defeat to England. That only intensified the calls for his head. On the one-day front, things were better, but not very inspiring. Thus, the question then was: How could the board back a man with such an appalling track-record?

A few months down the line, that decision has been answered. Fletcher has quietly vindicated himself as the young India clinched the ICC Champions Trophy 2013 at the back of a 4-0 (Tests) whitewash of Australia. There is a sense of optimism now in the Indian team, clearly leaving its turbulent phase. The winning mojo seems to have returned as there is confidence, fearlessness and the hunger to perform. It is quite ironic that not a lot is said about his role with India doing well.

However, that is perhaps how Fletcher would prefer it. Similar to his predecessor Gary Kirsten, Fletcher is happy to stay away from the limelight and goes about his job quietly — unseen and largely unheard. Coaching a high-profile team like India can be taxing, and it is best to shield oneself from all the pressure. In hindsight, he has done well so far in that regard and his patience has paid off. Even though India were going through a tough time, he was the right man to take them through given what he had done with England in the early 2000s.

When Fletcher took over the England role in 1999, they had hit an unparalleled nadir and needed to revive their fortunes. He forged a successful partnership with Nasser Hussain as the duo lifted the team from the muddle. The same England team went on to do the unthinkable when they won Test series’ in Pakistan and Sri Lanka — territories where one would have expected them to struggle. Under his watch, players like Marcus Trescothick and Michael Vaughan blossomed into dependable batsmen.

Fast forward to the present day, Fletcher is doing something similar with the Indian team. India have moved on from the likes of Zaheer Khan, Harbhajan Singh and Virender Sehwag. In their spots, you have Shikhar Dhawan, Ravindra Jadeja and Bhuvneshwar Kumar — men who were the pillars of India’s Champions Trophy victory. Although India have bettered their Test record by whitewashing Australia, they have some work to do in that arena with the overseas tours coming up.

Given his experience with England, Fletcher has the experience to guide this young Indian team through the transition phase. The legends have almost gone and Sachin Tendulkar too wouldn’t be around in Tests for too long. But the Champions Trophy victory gives India hope and that has to translate in Tests. Along with Mahendra Singh Dhoni, Fletcher can be the calming influence on this young Indian side that is unafraid to express itself. He has a critical backroom role, formulating strategies, assigning roles to players and at times taking tough decisions.

To the outside world, Fletcher may not seem very talkative, but one can’t coach for too long without being a shrewd customer. Fletcher has also shown staggering commitment. During the Champions Trophy, he lost his mother and had to leave for her funeral. But, being a professional, he returned to the team and saw them through to the crowning glory.

Unlike football, a coach in cricket does have his limitations. He can, at best, direct the proceedings at practice and chalk out strategies with the captain. However, the captain takes over completely once the team is on the field of play. In such a situation, the coach can only make suggestions during the breaks and it is left to the captain to make the ultimate decision. But, in football, one often sees the coach or manager yelling from the sidelines and even makes crucial substitutions. Such powers are not vested in a cricket coach and the failure of his side is not so much on him as it is on a football coach.

Nevertheless, he does have a crucial role to play. If a coach crosses the line and rubs a few people the wrong way, it does cause instability. The Greg Chappell episode is proof of that. But, when he takes a predominantly backroom role and finds methods to inspire his players — that is when a cricket coach is successful. Kirsten did that with India, Fletcher did the same with England early on and he is perhaps on his way in his current assignment. He has a young set of players who need guidance and he has to show them the way in the near future.