The last 18 months have been horrendous for  India. Since attaining the pinnacle in April 2011, very little has gone their way. A downward spiral was always a possibility, because meeting the challenge of heightened expectations was always going to be arduous after such a triumph. 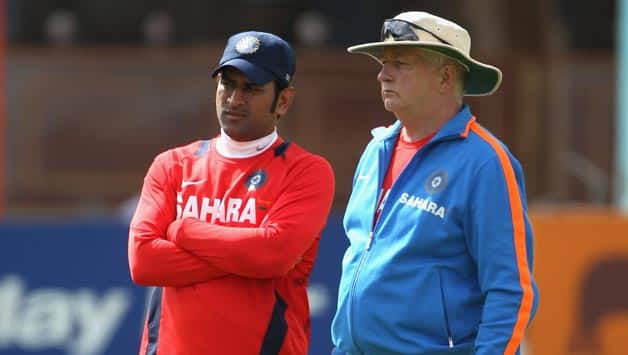 With voices demanding an overhaul gaining in momentum, it’s going to be an uphill task for Duncan Fletcher (right) to turn things around © Getty Images

The last 18 months have been horrendous for India. Since attaining the pinnacle in April 2011, very little has gone their way. A downward spiral was always a possibility, because meeting the challenge of heightened expectations was always going to be arduous after such a triumph. Many have fallen, albeit not with such intensity, after scaling peaks. Very few teams, like Australia and West Indies of the past, continued to hold their position of dominance long after their victory march. Rather than reclining and savouring the sweet taste of success, the players drew inspiration from it to constantly knock down every opposition that crossed their path.

Gary Kirsten’s exit as India’s coach after the 2011 World Cup was seen as a boon by a few optimists. After claiming the ultimate prize there is in international cricket, it’s hard to keep the team motivated. India held the top position in Tests too, so in reality, there was very little left to achieve. That is where Duncan Fletcher could have been instrumental. The Indian management did a fine job by roping in a man of such stature, and considering the fact that he was Kirsten’s recommendation, one felt that the stage was set for India to continue to thrive on the level they promoted themselves to.

Fletcher did a fine job with England, although his dream of seeing the side grab the No.1 spot in Tests never materialised under his tenure. But it did speak volumes of the kind of targets he set. Considering how he moulded the English team into a formidable unit, the task of ensuring India’s position at the top was comparatively an easier challenge. Moreover, there were no glaring issues with the Indian team that needed immediate addressing when he took charge. It appeared as though Fletcher was easing into his job quite well before the July of 2011, but the worst was yet to come.

By February 2012, India lost eight overseas Tests and, although they won against relatively weaker opponents at home, the margin of victory could have been much better. Whenever the opposition attacked, the Indian players went into a cocoon. It’s hard to think of a single session during which they dominated at either England or Australia. Results in One-Day Internationals (ODI) continued to dwindle as well. Several senior players copped a lot of criticism during this phase, but fingers weren’t pointed at Fletcher yet.

Perhaps it was right for Fletcher to remain behind the scenes, since it doesn’t often end well when you open up to give answers, especially in the subcontinent. However, it now appears as though his deadpan approach is beginning to wear thin. Kirsten too wasn’t a man of many words, but he was vocal about his future plans and how he was planning on remedying a situation. Perhaps Fletcher doesn’t have a free hand here as it may have been in England, but it’s something he would have been aware of before taking up the offer. Like Kirsten, he too could have worked with or around it.

Teams with proactive coaches continue to have a better success rate, although there are occasional glitches on and off the field. Andy Flower is a key decision-maker in the English setup. We’re all aware of the vital role he played during England’s rise last summer, of his stand on the Kevin Pietersen issue, of what he thought about the bowling department and the fact that he takes blame whenever his side loses. “It was a mistake not to play Monty (Panesar) in Ahmedabad. I didn’t expect that pitch to turn as early as it did. I certainly misjudged it,” he said after England lost the first Test. It’s difficult to imagine Fletcher doing that these days.

Australian coach Mickey Arthur, too, has been clear in his thoughts. In conjunction with Michael Clarke, he has ensured that things don’t go awry during the transition phase. He talks about who he thinks is going to be the right replacement for Ricky Ponting, about where Shane Watson should be batting or what the team’s shortcomings are. In stark contrast, Fletcher’s thought process has been hard to decipher, and it’s hard to recollect the last time he stated something with an air of authority.

If India fails to draw level at Nagpur, there is little doubt that Fletcher, who is already walking on thin ice, will be forced to answer some tough questions. Whether the head honchos will continue to back him after this series will be interesting to see. With voices demanding an overhaul gaining in momentum, it’s going to be an uphill task for Fletcher to turn things around. Like Mahendra Singh Dhoni rightly said, albeit in a totally different context, you get to know the character of a team or a person only in tough times.