October 15, 1999. Set 197 on a Sharjah evening, a star-studded Sri Lankan batting line-up was cruising to victory. Then Wasim Akram and Abdul Razzaq wreaked havoc with reverse-swing as an outrageously little boy chipped in with crucial contributions. Abhishek Mukherjee looks back at the emergence of Shoaib Malik on a Durga Puja night and an emotional turmoil when he had to choose between cricket and lesser festivities.

October, 1999. Kolkata was buzzing in anticipation of Durga Puja, the greatest festival in a city that seems to have about fifty a year. Depending on your perspectives and choices, Durga Puja can be your best or worst week of the year. Being a part of what seems like half the global population amidst blaring microphones and the combined aroma of sweat, polyester, and chilli sauce is certainly the idea of fun for a lot of people. This is the story of an evening of what used to be a four-day festival in my childhood and last double that span these days.

Triangular ODI tournaments were in vogue those days. West Indies, Pakistan, and Sri Lanka three teams with 4 of the 7 editions of World Cup cricket were competing for the Coca Cola Champions Trophy at Sharjah. West Indies scraped through against Sri Lanka in the first match, only to be steamrolled by Pakistan in the second. The third match was expectedly between Sri Lanka and Pakistan.

Sri Lanka did not do well in the World Cup earlier that year, but that was in England. Their phalanx of spinners, which typically consisted of Muttiah Muralitharan accompanied by men who could bowl wicket-to-wicket were dangerous on slow, low subcontinent pitches, especially under lights. There were also Chaminda Vaas and an explosive batting line-up to contend with.

Pakistan continued with their tremendous form from the World Cup. They did not have Saqlain Mushtaq. They replaced him with a scrawny boy of 17 who did not look a day older than 14. Slight and short, the boy had eyes that reminded you of a deer caught in a headlight. There was no Saqlainesque shrewdness in him: he seemed to have been kidnapped from his study table and asked to bowl off-breaks with a Saqlain run-up. He could well have been the boy next door busy memorising trigonometry formulae.

Shoaib Malik had done well on debut, helping his teammates strangle the West Indians. He was little more than a rank tail-ender those days. He batted at No. 10, just above Arshad Khan. In the match in question he walked out to take his position at the non-striker s end. Abdul Razzaq ran a single. Malik hit the next ball back to captain Sanath Jayasuriya and left for a golden duck, just like that.

There was nothing left in the match. Pakistan folded for 196. Marvan Atapattu did not last, but Romesh Kaluwitharana and Russel Arnold batted without much fuss. There was not much left in the match, what with Sri Lanka needing 40 runs from 15 overs with 9 wickets in hand.

They summoned me from the local pandal, one of the most glamorous Pujas in the city (for reasons unknown). Cell-phones in those days were beyond our purchasing power: they had sent a messenger .

I had to convince the messenger (a friend of mine, though I think he would not have felt the same way since that day): since Pakistan and Sri Lanka were playing, I would not commence that journey before the match got over.

He still wanted to have a look at the score. I could almost read his mind: it must be a very, very close match out there, why would Abhishek delay otherwise? Unfortunately, the 40 runs-15 overs-9 wickets equation rattled him up so much that he left without a word, but by then Razzaq had claimed Kalu, caught-behind.

It did not matter, for Arnold was joined by Aravinda de Silva, the man who had stood between India and a World Cup final berth at Eden Gardens 1996. Another 5 overs passed. They now needed 24 from 10 overs with 8 wickets in hand.

I had made up my mind by then: since I have waited this long, I might as well wait till the end. How long will it take? Four overs? Five?

The little off-spinner came on with SHOIB (not SHOAIB) on the back of his jersey with colour to match a banana leaf s. The first ball of the over was straight, but on a length that drew Arnold forward; the ball hurried through the gate to knock his off-stump back.

Jayasuriya, having held himself back till No. 5, strode out purposefully. He could do this in this over…

But Jayasuriya managed only a single. Wasim Akram returned at the other end to finish what seemed like a pointless exercise. There was a leg-before appeal as Jayasuriya shuffled. No, said David Shepherd. Sanath unleashed his famous slash next ball one that was a few inches too high; he was caught-behind.

Surely they cannot win it from here? Vaas bats at No. 9…

The boy-man continued at the other end, keeping Aravinda under check something most of his contemporaries had failed to achieve. The great man could have perished, but the top-edged sweep fell short of deep fine-leg. He did not, however, survive Wasim: for some reason he tried to pull one that was too full for the shot and was bowled.

20 runs, 40 balls, 5 wickets: suddenly I was not missing the festivities any more.

Chamara Silva joined Mahela Jayawardene. They batted cautiously. They knew that all they had to do was to survive those 40 balls. Given the rules of ODI cricket, the runs would take care of themselves if they lasted.

The first threat passed by: they saw off Wasim s spell. The singles came.

Sri Lanka needed 11 from 26 balls. Then Razzaq had Mahela caught-behind. The sensible thing for Suresh Perera to do was to hang around, give the strike to Silva, or maybe put the occasional full-toss or long-hop away. Instead he went for an ugly hoick first ball, missed completely, and was clean bowled.

Malik continued. He went for wickets. Silva was up to the challenge, smiting one to the point boundary. It was the kind of shot that brings a dressing-room back to life.

Then, with 3 to get from 13 balls, Vaas lost his composure completely. Nine out of ten times he would have blocked the ball, or might have tried to push it in a gap. Instead, he tried a hideous cross-batted swipe, trying to heave a ball on off-stump somewhere towards leg; the stump was knocked out.

Meanwhile, Malik, the boy entrusted with bowling in the death with so much at stake, had bowled out. He was replaced by Azhar Mahmood. Razzaq, of course, would bowl the final over if one was needed.

Silva guided the first ball to third-man. They ran a single. 11 balls, 2 runs, 2 wickets. Murali could do this in one shot…

The next ball was outside off. Murali poked at it and missed.

The next ball was outside off again, only reversing away. Murali poked again and missed again. There were still more than enough balls left. In fact, if Murali kept Mahmood out Silva would almost certainly clinch it at the other end.

The next ball was closer to Murali, who somehow placed it towards point. Silva set off in a flash. Murali responded. And they were through. The equation was simple: Sri Lanka could not lose, but Pakistan could tie this. They had to keep Sri Lanka from scoring for 8 balls, or, more realistically, get 2 wickets.

I reached out for my wallet and watch. It had been a nice match another 5 runs, and…

Mahmood stuck to his outside-off line. This time it came back in slightly. Silva poked and missed. There was still nothing in this, but what if…?

Silva shuffled across and flicked. Murali sprinted as if his life depended on it. The square-leg fielder, still in motion, stooped to pick it up.

It had to be a Joe Solomon moment, nothing less, with one stump to aim at and a split second to hit it. The fielder took a couple of steps closer to the stumps to get a closer look before releasing that underarm throw.

It did turn out to be a Joe Solomon moment, sending the fielders into ecstasy as they engulfed the hero, who was jumping around everywhere, pumping his fist in celebration. The television camera zoomed in on him. It was indeed that scrawny teenager, a boy who had got rid of his school-dress to don the guise of adults.

And Razzaq hit timber the first ball of the final over to tie the match as Silva went for an expansive off-drive in response to an in-swinging near-yorker.

I waited for the Man of the Match award before I left to join my friends. They never understood. They were not expected to.

But Puja has remained synonymous to Shoaib Malik since then.

Man of the Match: Abdul Razzaq.

Seventeen years had passed since the match. The teenager was now one of the senior men in the team. Never a regular in the Test side, Shoaib Malik was recalled following a phenomenal year in limited-overs cricket.

It was two days after the festivities had got over in Kolkata, but the city was suffering from her annual post-Puja hangover. I was, however, in another city.

Malik walked out at one-drop. By stumps on Day One he was on 124. He got out for a career-best 245 the next day. It was 1999 all over again as memories kept flooding in…

Less than three weeks later he announced his retirement from Test cricket to allow youngsters to be groomed. It was ironic, for it was hardly believable that anyone could be younger than that boy who had once seemed confused (but not overwhelmed, certainly not) in the company of Wasim and co. 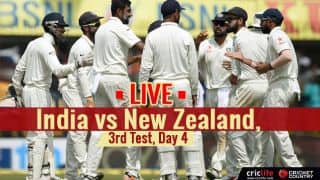 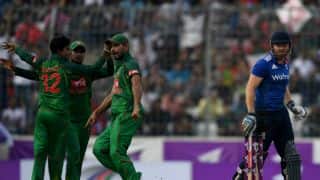